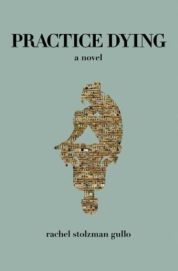 In the late 1980s, a young boy from the Upper West Side walks into the 92nd Street Y and meets the Dalai Lama, setting in motion a lifelong spiritual journey. Twenty years later, a young woman browsing the stacks of the Strand has a “meet cute” with an expatriate chef from India, who is taking a year to work in NYC for reasons that are initially hidden from her, and from the reader. These two encounters instigate the plot of Rachel Stolzman Gullo’s latest novel, Practice Dying, and they illustrate the way various forces (religious, political, cultural, economic) intersect, bringing people into collisions or convergences that shape their lives. The novel gets its momentum from people moving from their centers, with all their confusions and contradictions, but its depth is found in the awareness that our movements are shaped by forces larger than ourselves. It’s a delicate balance, but Gullo finds it, and with it the pleasures of a story where the characters have meaningful choices within a matrix of connectedness.

Practice Dying is about a pair of twins: David and Jamila. The first chapter is narrated by Jamila, just turning thirty, who works at a center for pregnant and parenting teens. With the next chapter, we transition to the point of view of David, who separated from the family somewhat dramatically as a teenager when he became a devotee of Tibetan Buddhism and a disciple of the Dalai Lama. As Jamila has a crisis of alienation, precipitated by a brief but passionate relationship with Salam, the chef, David is having his own crisis: sent away by the Dalai Lama to study in Tibet, he has arrived in Sichuan only to ignore his leader’s instructions, derailed by a desire for connection with a man who will not connect with him. The chapters continue to alternate the point of view. For the first third, whatever happens in New York City belongs to Jamila, and whatever happens in Tibet belongs to David. Once the twins are reunited and their lives begin to overlap, there are times when we see events that center around David from Jamila’s perspective and vice versa. It’s a structure that marries the predictable and the unpredictable nicely.

Gullo builds a story that explores the challenges of cultivating a life of wholeness when the only materials at hand, those we inherit from this world, are inevitably incomplete. This might mean trying to forge romantic and sexual intimacy with another person when our understanding of them is always partial, marked by fault lines and gaps. It might mean trying to follow a religious path, in which both the self and the tradition shaping it are subject to revised understandings. It’s fitting, then, that the novel is structured as a braid of two distinct but related narratives that are incomplete by themselves but together form a satisfying whole.

As Gullo has fictionalized him in Practice Dying, the Dalai Lama leads one to new places without any overbearing direction or coercive strong-arming. This seems to be true of Gullo as a writer as well. In both Practice Dying and her earlier novel, The Sign for Drowning, Gullo strives to communicate in a way that is never obscure but also free from tedious over-explanation; she is always opening up possibilities for understanding rather than closing them off. Clarity is paramount. In The Sign for Drowning, the narrator muses, “How do you tame or whittle or lure one memory into telling the truth? Show me how to look at a child without seeing another child, or its mother, or the place where she came from.” These words would make an equally good mission statement for Practice Dying, a novel that strives to see each person for who they are and the worlds they carry with them.