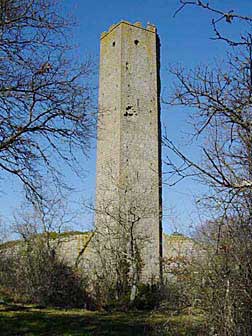 Along a busy stretch of highway north of Rome, near the town of Viterbo, a solitary tower thrusts up among the trees overlooking a deep gorge. This 13th-century tower, known as the tower of Chia, was once the writing studio of Pier Paolo Pasolini, novelist, poet, and filmmaker. Purchased by Pasolini in 1970, the tower served as a refuge for the writer and his entourage until his death in 1975. He would come here to recharge, interrupting his intense work schedule in Rome, and spend a few days relaxing in one of the wilder areas of Italy, known as the Tuscia, once the heart of Etruscan territory.

Pasolini discovered the ruined tower in 1964, while filming The Gospel According to Saint Matthew, several scenes of which were shot in the surrounding area. Six years passed in bureaucratic red tape before he was allowed to buy this historical building and have it restored. The tower was not remodeled to make a modern living space—he merely reinforced its structure, and had a small two-room studio built at the base, with huge windows facing out on the gorge. To Pasolini, who had traveled widely, the landscape was breathtaking. It was here he sought inspiration while working on his last, unfinished novel, Petrolio. It was here, friends say, that he desired to be buried.

Although the tower is inaccessible to visitors, with a huge iron gate blocking the entrance and no plaque of any kind commemorating the writer, it is still a place of pilgrimage for Pasolini's many admirers. After parking outside an improvised garbage dump for building materials, I follow a well-beaten track leading through the woods to the tower. Boars must frequent the trail at night—the soft mud is covered with hoof tracks. Crows squawk in the naked branches overhead, while cars zip by on the autostrada. Although visitors cannot enter the gate, I walk around the walls but decide not to hike down the steep trail through the gorge to the stream below, immortalized in Pasolini's film as the River Jordan. 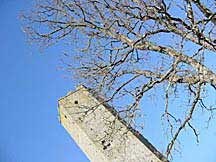 There is a peculiarly Pasolinian flavor to it all: the stern, archaic tower, sheep grazing nearby, and the autostrada with its gas station in view as the only signs of the encroaching urbanization Pasolini deplored. Pasolini's work explores the social problems created by the industrialization of a society rooted in a rural, agrarian culture, and his views have even greater relevancy today in this era of globalization. Pasolini had deep respect for Italy's peasant origins and for the medieval traditions springing from those origins. Here in the people and the landscape of the Tuscia he found that rough peasant vitality still intact.