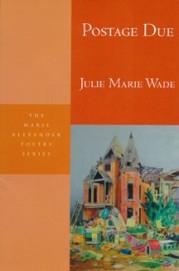 In her debut poetry collection Postage Due, Julie Marie Wade investigates the line between poetry, prose, and ephemera to create a volume that illuminates the complicated interplay of personal memory and desire. Among lined and prose poems, readers can also find postcards and letters the writer has addressed to elementary school friends, enemies, and former role models like Mary Tyler Moore. The various forms highlight tantalizing acts of quasi-autobiographical performance, exploring questions about who affected the author in the past and what she wants to say to them now.

The book’s concept showcases Wade’s talent for writing about larger issues through surprising and personable details. For instance, in “Epiphany,” a poem about the ways in which Truth is often obscured by the strange rules of elementary school education, the poet moves from her own experiences to ask the reader, “Did you ever make a diorama? Perhaps from a shoebox & in the third grade?” Despite the question’s hyper-specificity, Wade knows most readers with a fairly standardized U.S.-based education will answer “yes.” These shared experiences illuminate other, more significant connections about what we are taught, what we experience, and the ways it affects us.

While the forms of the poems are engaging, there are times when the overall effect is less so. The poems work so much with episodic memory details that often the sense of present conflict is lost. “For Anna Shope, Who I Always Hated in High School” begins as an interesting confession about the speaker’s annoyance at Anna’s good grades and, more importantly, about the writer’s obsession with Anna’s looks and ability to get boyfriends. However, as the poem continues, both internal and external conflicts are erased:

We both graduated with 4.0s. You went pre-med, & I became an English major.

Are you a doctor yet? Am I a poet?

I’m not sure how the measure’s made, but I feel sure you’ll make it. And as for me & my weak knees: I’ve been kissed that way I once could only dream.

In many poems, including this one, the speaker relates past problems from a current position of relative privilege, and this perspective makes it difficult to understand what is truly at stake. Because the language is so conversational, this avoidance of current conflict is felt even more acutely, and the poems can frustrate in their lack of resonance.

The postcard poems that appear at various points in the collection create the most direct and affecting confessions, and they are also the poems where the conflicts are least resolved. The postcards to her mother and father, particularly, surprise and evoke a tension that is often pushed away in other poems. The book’s organization into four parts—“Lent,” “Pentecost,” Advent,” and “Epiphany”—adds another layer to the themes of confession and retribution that run throughout. Having also published two books of lyric nonfiction, Wishbone: A Memoir in Fractures (Colgate University Press, 2010) and Small Fires (Sarabande Books, 2011), Wade is clearly interested in experimenting with the line between autobiography and art; we can look forward to reading more from her and to watching her autobiographical performance continue to evolve.