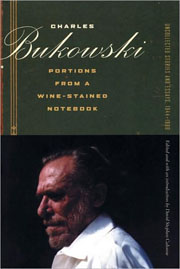 Most readers either love or detest Charles Bukowski, the poet and novelist infamous for his prodigious, worldly appetites. Many often confuse him with the persona he presented in his work: hard-drinking, violent, cruel. There is also the issue of class; certain readers seem unable to forgive Bukowski for achieving fame and fortune from his realistic portraits of fast women, alcoholics, and the unemployed. He has been accused of being a misogynist and a bad writer. Yet Bukowski’s work contains a verisimilitude, humor, and courage missing from most writing. It hums with a life that much poetry and prose lacks. So much Bukowski material has been released since he died in 1994 that his posthumous output rivals that of hip-hop icon Tupac Shakur. Portions of a Wine-Stained Notebook is the latest of these posthumous collections, dredging up miscellaneous stories and essays which appeared in publications as varied as Cream, High Times, Hustler, and the Los Angeles Free Press. The entries contain many of Bukowski’s signature elements, including sex, booze, gambling, and domestic violence. But they also reveal a sophisticated side of the author: his love for classical music and his impressive knowledge of literature, for example.

As editor David Calonne points out in his introduction to Portions, “Part of the failure of the American critics to properly take Bukowski’s measure is their ignorance of his essentially European cultural sensibility.” Calonne reminds us that Bukowski is a “literary rebel” like Artaud and Celine: “Bukowski’s breaking of taboos has a certain ferocious (and ironic/humorous) intentionality about it. He is violent and sexually manic in ways that his two American masters—William Saroyan and John Fante—are not, although his aggressive prose should be understood as the tough carapace he adopts to protect himself from violation.” In “I Meet the Master,” Bukowski’s account of his efforts to track down Fante, Fante asks Bukowski’s companion, “Is he really as tough as he writes?” She replies that Bukowski is “220 pounds of melting butter.” This is not news to those who have actually read his writing. Despite his brash exterior, Bukowski had heart.

Bukowski, of course, was aware of his reputation, but did not allow it to get him down:

What fame I had was mostly in Europe, through translation. In the U.S. stories went about that I beat my women, hated homosexuals, and was a vicious and terrible person. The university dandies had it in for me. A student came by one night and over some beers he told me: “My prof says you’re a Nazi and you’d sell your own mother out for a nickel.”
“That’s not true,” I told him. “My mother is dead.”

In the title essay, as close to a manifesto or an ars poetica as Bukowski ever wrote, the author poses a series of questions such as “Does pain make a writer?” He also shares his personal philosophy: “I believe in the God of Myself: the one who finds as much color in a brick as in a rose, superable yet adamant.”

Some of Bukowski’s best material is his criticism of other writers. He sometimes dispatches with long lists of sacred literary heroes in a single paragraph, as when he explains how the changes in men’s lives diminish the strength of their writing:

Céline became a crank and forgot how to laugh . . . . Mailer became an intelligent journalist, as did Capote. Pound just got darker and darker and pissed out. Spender quit, Auden quit, Olson begged to the crowd. Creeley got angry and tightened. Abraham Lincoln hated blacks and Faulkner wore a corset. Ginsberg sucked to the sound of himself and was overcome. And old Henry Miller long done, fucking beautiful Japanese girls under the shower.

Bukowski hilariously describes a fistfight with a Marine who “had a good mind” but an unfortunate admiration for Thomas Wolfe and Theodore Dreiser:

One night after the gamblers left, we sat down with the whiskey and tried to talk it out. I also told him that Faulkner was playing children’s games. Chekhov, no—a playpiece of the comfortable masses. Steinbeck, a technician. Hemingway, only halfway. He liked them all. He was a damn fool. Then I said that Sherwood Anderson could outwrite the whole bloody gang. That started something.

It was a good fight. Finally, every mirror and bit of furniture in the room was flattened out.

Portions contains material that diehard fans will love, including ruminations on politics, literature, academia, gambling, and drunk driving. One story features a case of coitus interruptus involving a silver statue of Jesus Christ; another features a three-way encounter with two women that is a marvelous example of over-the-top pulp erotica. There are descriptions of a 1975 Rolling Stones concert, a brief encounter with Allen Ginsberg, and a riot. While this book may not win Bukowski any new fans, those who love his acid wit and unflinching look at the lives of real people will not be disappointed.