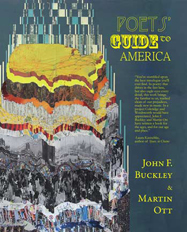 Poets’ Guide to America, a poetry collection by the writing team of John F. Buckley and Martin Ott, is a good book to have with you on a train or in the back seat of a friend’s car, preferably on a long trip, as you watch the Coke signs, shopping malls, and burger joints of backlot America go by. This is an America of flickering neon-lit dive bars in the cities and secret government labs in the desert; you half expect to run into Humbert Humbert in a motel parking lot or Dean Moriarty hitching a ride in a circus truck.

The Guide makes a litany out of American kitsch. The book’s first poem, “Underground America,” gives snapshots of semi-finished basements across the country, with “the glug of the sump pump” in Baltimore echoing in a “retrofitted septic tank” bunker in Biloxi. “Objects in a Forgotten Cedar Point Lost-and-Found Locker” piles item on item, assembling the debris of various lives, juxtaposing the sentimental and the grotesque, from the “sealed envelope labeled ‘Baby’s First Hair Cut’” to “a blue tulip wrapped in barbed wire / tattooed on a slice of tanned flesh curled like a potato chip” and “a taxidermied hamster holding an Ohio State pennant.”

The book’s fifty poems cover all the states, plus Puerto Rico, a few mentions of Guam, and an occasional glance at Canada and Mexico across the borders, proceeding in the order in which states joined the Union. The voice is usually that of a visitor or an outsider, but occasionally we are introduced to a place through the eyes of an inhabitant: the daughter of the mayor of Providence, a pair of college boys from Ann Arbor. Most poems concentrate on a single place, describing the attributes a tourist might notice—Minutemen, chowder, and Harvard Square in Boston; loggers, grunge, and Starbucks in Seattle—but a few give a larger view of a region (“Monsters and Madmen of the Five Great Lakes”) or of the country as a whole (“If Poets Had Conquered America”). To make room for these poems in the fifty-poem structure, some states are dealt with only in the comparative basements of “Underground America.” Whether or not this seems like cheating probably depends on how strongly you feel about the regional reputations of Delaware, Connecticut, and West Virginia, but the book benefits from the varying depth of focus.

While the foreground is full of the sights of the road trip, the background suggests layers of other, quite different Americas. The poems make much of place names, and as we encounter Roanoke, Quondahasset, and a “Mackinac Kraken,” we may start to remember the Native American origins of more familiar names like Milwaukee and Massachusetts. Various European languages pop up, too, as we are propositioned by a Russian in “The Tenth Circle of Miami” or serenaded in fake-German adspeak in Utah. The gritty, ephemeral, exuberant, sometimes repulsive America of these poems is built on the Americas of Powhattan and Paul Bunyan, infused with the languages of recent immigrants, creating “new gods” to replace old ones. If those gods are sometimes crass, like the “goddess Pornucopia,” they’re impressively energetic.

The project suits its subject matter: like the Americas they describe, these poems are constructed collaboratively. Buckley and Ott seem to have worked seamlessly, presenting a unified vision, while playing with a wide variety of images and trying out a number of forms. If there are occasionally places where the book’s vision could use a little more precision—“Thirteen Ways of Looking By a Black Bird” conflates crows with ravens, and doesn’t do very much with the Stevens poem invoked in its title—that may be the price of its broad scope, covering not just most of a continent but the peculiarities of a lot of very different locations, and maintaining throughout a vivid sense of curiosity and fun.