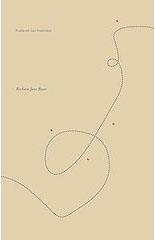 do you know what it is to witness an unraveling?

Barbara Jane Reyes's second book, Poeta en San Francisco, explores the translatable and untranslatable collisions of writing self and culture. We immediately become bound to the "lack of apology for what [the poems are] bound to do," which is, as the book's trinity-like structure suggests, to "orient," "disorient," and "re-orient." Throughout this work, we confront the crisis (or the "state of emergency," as Reyes puts it) of "no single, adequate translation" for writing personal and cultural experiences; these poems, however, create a momentary "cove to escape the flux."

Poeta inscribes and re-inscribes the voices of San Francisco and the physical characteristics of the city itself. San Francisco functions figuratively as the book's main trope and as actual landscape:

Reyes reads the city through its interpersonal and historical violence against Asians in general, and Filipinos particularly. She doesn't suppress difficult histories or the voices that these histories have suppressed; instead, she allows an innocent conception of the city to be haunted by its ghosts:

north of market's upscale shopping mecca's center you can't miss the huge female personification of victory riding an erext 97-foot granite phallus to commemorate commodore dewey's victory over the spanish armada in manila bay on may 1, 1898 this monument dedicated by gun totin' fist shakin' rough rider teddy on may 14, 1903 to end a splendid little war to begin what is known as a small insurrection

The space in which peoples geographically and historically separated come into contact with each other and establish ongoing relations, usually involving conditions of coercion, radical inequality, and intractable conflict. . . . By using the term 'contact,' I aim to foreground the interactive, improvisational dimensions of colonial encounters so easily ignored or suppressed by diffusionist accounts of conquest and domination. A 'contact' perspective emphasizes how subjects are constituted in and by their relations to each other . . . in terms of copresence, interaction, interlocking understandings and practices.

Reyes's account of culture foregrounds the co-presence of different cultures and the interlocking histories of these cultures. The subject of Poeta, its I, is constituted and re-constituted through its relation to the other. Throughout Poeta, we witness the intersecting trajectories of body, self, culture and city:

we are penned in this narrow strip of land,
sutured by train tracks and high voltage wire,
where these piss and dank stankin alleys
embrace and tear us from our vigilance—
without so much as a sustainable gospel.

in our collisions, we learn to make new:
from our lacerated and fractured selves,
appendages resembling tails, horns.
and, siempre, wings to capture breath.

Reyes proposes that we fashion ourselves and histories within the "contact zone" of our collisions to develop a "sustainable gospel," a communal act of remembrance and invention. In a space where "the pure products of America go crazy" (a line William Carlos Williams wrote in "To Elsie" is quoted inPoeta), Reyes employs a lacerated lyric and de-centralized perspective to wing its fractured narratives.

A modern 'ethnography' of conjunctures, constantly moving between cultures . . . is perpetually displaced, both regionally focused and broadly comparative, a form both of dwelling and of travel in a world where the two experiences are less and less distinct . . . Ethnography, a hybrid activity, thus appears as writing, as collecting, as modernist collage, as imperial power, as subversive critique . . . a way of understanding and getting around in a diverse world that, since the sixteenth century, has become cartographically unified. One of the principal functions of ethnography is 'orientation' . . . But in the twentieth century ethnography reflects new 'spatial practices' (De Certeau, 1984), new forms of dwelling and circulating.

With textual formations continually moving through moments of displacement and disjuncture, Poeta is deeply concerned with "orientation" and the creation of new "spatial practices" in navigating a diverse world. This collection serves as both a poetry volume and ethnographic notebook, recording new multiperspectival cartographies derived from the "contact zone." At one point, Reyes asks: "wanna peek into my notebook? There may be clues hidden in it: instructions for viewing subjective catastrophe. rules of derivation." Learning the rules of derivation will help us understand Reyes's methodology: She leads, draws, and receives from a source. She procures an effect from causes, means, conclusions and opinions from evidence. She traces origin or descent, as in grammar or genealogy. She deduces one function from another according to laws of differentiation and of integration.

Reyes's contact perspective produces a "contact aesthetic," as various languages (English, Tagalog, Spanish, and an ancient script of the Philippines called Baybayin) interact with numerous formal experiments employed towards "the absurdity of navigation." For example, Poeta moves from unpunctuated prose ("do not dip your hands into fish sauce fermented shrimp paste vessels do not grimace tasting salty wetness do not forget to clean up your own mess here no frills leaving gratuity is customary mark of manners") to the epistolary ("dear love, / remember the bamboo tiger cages in those goddamn movies. and napalm, sinister rain, deathly tangerine vapor veiling the islands, for simulation's nothing like the real thing. the real thing. the real thing"); from confessional ("Forgive me father, for here have I faltered. / It has been thirty years and counting, / the process of my acculturation.") to urban-slam ("unsavory districts for kicky dining amongst lush and plush urbanoids, kooky and kitschy, freewheeling trendoids for even the moneyed sport funk-to-grunge artsy attire"); from notes on Asiaphiles ("1. A non-Asian male who prefers Asian women. . . . / 2. A white western male with a pathological, sexual obsession with Asians and their cultures. / 3. A non-Asian person, most often a white male, with yellow fever.") to outright storytelling:

one day she will build a temple from detritus, dust of your crumbling empires' edicts; its walls will hold with blood and spittle, brackish water and sun-dried grasses. within these walls she will inscribe her own terms of worship, upon every pillar and column, glyphs resembling earth and ocean. once she had no sharpened stone, no reason for stone, for once the wind bore her words upon its entire wingspan. Carved into bamboo, banana leaf, her river poems, her birdsong.

Reyes's ruptured fieldwork rubric resists objectivism in favor of "new forms of dwelling and circulating." The methods of seeing and writing culture d(e)rive the narrative through the diverse contact zones of the city and the resulting "subjective catastrophe." In this "state of emergency" where no grand narrative can adequately translate culture, Reyes offers us a shifting narrative that adjusts to variable moments of seeing.

Besides being a "poethnographic" project, Poeta en San Francisco is also a prayer. Writing from within one of the many cultures of U.S. imperialism, Reyes expresses an urgent plea in her native tongues in which "breath is word is spirit":

Although Reyes offers a prayer for her community, she doesn't speak for her community; instead she speaks honestly, intimately, and lyrically within and through her community. In this sense, writing culture becomes "constit(ch)utive" of poetry and prayer.

Turning to the final stanza of Williams's "To Elsie," we read: "No one / to witness / and adjust, no one to drive the car." Through Poeta en San Francisco, Reyes re-imagines the single car as variable narrative vehicles; in addition, she re-imagines the "no one" (the "no single, adequate translation") not as an absence, but as an opportunity to navigate these vehicles through a new, sustainable perspective: "The blank space on your map, that's where I was born. . . . Can you appreciate the neither here nor there of it all?" Reyes shows us that the blank space on our maps are not blank at all, but open. It is their openness that we must appreciate and redraw in order to navigate the blinding lightness of the "neither here nor there." Poeta performs this adjustment at every textual moment, and we are present to witness her unraveling prayer: