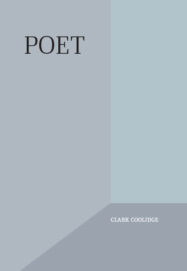 Clark Coolidge is a powerhouse among poets; over the years his sheer output has been nothing less than monumental, and at seventy-nine years of age shows no signs of stopping. The latest little brick-of-a-book added to the Coolidge canon is Poet, a rip-roaring whale of a poem-series (over 300 pages) riffing off the late David Meltzer’s “When I Was A Poet,” the joyously reflective title poem that takes up a mere eleven pages of Meltzer’s 2011 collection. While Coolidge’s dedicatory note to Poet gives Meltzer the briefest of acknowledgements (“thanks to David”), there’s nothing more really needs be said. Meltzer would love Coolidge’s book and definitely dig the props given to his own poem:

when I was a poet       when I was a portrait
a potentate       a Peterbilt       a porcelain stevedore
a peek at that shack at the end of the peneplain
poet the finisher of everybody’s questions
poet takes a phone break
poet broods getting the point
poet catlike perplexed by doorsills
how many people do you think there are in the world?
add ten poets
poet turn mistakes into alternate takes

Coolidge and Meltzer’s friendship first began back in the 1960s, when Coolidge played drums in Meltzer’s psychedelic would-be pop band The Serpent Power. In more recent years the two poets had on occasion hit the circuit again as a poetry duo, exchanging choruses; at their best, these readings possessed a fascinating improvised structure as nothing appeared planned ahead of time, each poet reaching for their next material according to the nature of what they heard coming from the other as they read. Coolidge is still drumming, now with the free improvisation group Ouroboros, and his poems in part reflect the nature of his playing—a jangly set of lines that leap then abruptly halt before leaping again as assorted references get called forth into the fray.

Much of Poet is Coolidge at his most casual, allowing an abundance of name-dropping (e.g. “Gregory Corso I can hear you laughing”) while also tossing in plenty of references to popular culture, especially when it comes to film: “The apes had all left for another planet / . . . / planet of whatever the hell your talking about.” In all cases, the humor runs rampant, at times with hilarious shades of snarky cynicism, “poems of people who all hate each other.” The poetry world may (hopefully!) never be the same again.

Coolidge’s references, asides, and quick dodges are never too obvious. One page contains a robustly diverse range of figures from the poetry and art world. Few will recognize all these names, though googling will clue the curious in a bit. Still, be aware that to approach an approximate understanding of what associations may have popped into Coolidge’s mind will take more than just cursory screen scrolling:

Max Finstein a corn hen to be dipped
Piet Mondrian the organist
Joe Early’s duet with Don Shirley
David Rattray a weapon against the rain
A salt shaker in the hand of Carol Bergé
Roxie Powell the bug in a duck
Jamie MacInnis funny you should ask
Piero Heliczer compact as the sun
The Punishment of John Wheelwright an Ode
W. D. Snodgrass a dream of pickled horseflesh
Billy Collins a tissue of gummy bears
John Fles the magazine youth
David Salle tear sheet of the mouth
John Koethe a sally

It’s worth noting how among the mostly comic take-downs of more well-known figures there are dashes of what would seem the propping up of a few lesser known, true outsiders who were as yet very much a part of the scene way back when. 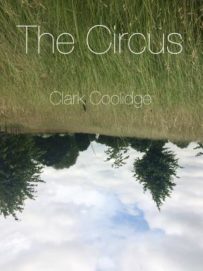 As opposed to the untitled entries on each page of Poet, the poems in Coolidge’s other recent volume, The Circus, retain the convention of individual titles. This volume, too, however, is a series composed in sequence from “5VIII02-27XI02” [Aug 5, 2002-Nov 27, 2002] as noted after the final poem. It’s likely not a good idea to read too far into the title. After all, it may just have come from the fact that it’s the title of the first poem:

There’s also a manner in which this book of poems, as might be said of many a book of poems, is a kind of circus itself, full of characters, stunts, animals, and barkers all gathered together between book covers for the enjoyment of the audience (i.e. readers). Or it could just be a commentary on how aptly the circus serves as metaphor for life and poetry, a representation of the world in which language is unleashed sounding out unexpected and bizarre scenes:

Kind of thinking you’ll have to scratch to survive
god knows what I really said to that eggplant
a whirling mass of air or mind
or drive this stake through your everyday scribe
it’s filled with foofy food! a hullabaloo
that’s normal for a poet like Red Rodney
billows with roses stamped out of stink fish
a patrolling problem down among the trollers for stuff
so what do we make? a shelf-life tryst?
bubbles up in the doubleyou column nobody wins
coughs lots though you weigh yourself in water
but what can you expect these days
a loaf split into three pinballs?

Both these books are admittedly much longer than the average collection of poetry. Coolidge’s Selected Poems 1962-1985 (Barrytown/Station Hill Press, 2017) was a revelation. Clocking in at nearly 500 pages, it offers possibly only a quarter of Coolidge’s total output during those years. Yet his massive oeuvre from that period has been magisterially shaved down by editor Larry Fagin (most likely with Coolidge’s assistance); the seemingly heretofore unapproachable behemoth pile of individual works is made utterly accessible. Although some collections are represented by mere snippets, each serves up prime example of Coolidgean perfection—which, it must be said, is by nature decidedly imperfect.

In Now It's Jazz: Kerouac and the Sounds (Living Batch, 1999) Coolidge declares he’s hungering to read ALL that Kerouac wrote, every as-yet unpublished page from the family’s archives. He’s desirous to experience every line Kerouac ever set down upon the page. Writing, much like reading, is an all or nothing endeavor for Coolidge; he’d have you read his books in total. So don’t wait for The Circus and Poet to appear excerpted in his next selected poems—get at them now when they’re fresh and, yes, quite popping.

Click here to purchase The Circus
at your local independent bookstore