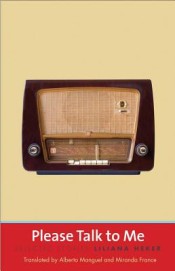 In a moment, a casual comment spoken or action taken can change a life irrevocably. Liliana Heker, an award-winning writer from Argentina, writes of these moments in this translated version of her short story collection, Please Talk to Me. She skillfully condenses relationships into moments where a concealed feeling is revealed, its consequences are long reaching, and there is no turning back for any involved.

Heker presents everyday situations in small scenes; several times, what starts out as a story about family members turns into a message about distinctions of social and economic class. She doesn’t directly mention the years of dictatorship in her country, but the issues she writes about are a result of those times. In “The Stolen Party,” Rosaura, a maid’s daughter, anticipates the birthday party of Luciana, a girl in a house where her mother works, and then learns the boundary of social class cannot be crossed in a so-called friendship. In “A Question of Delicacy,” a middle-class woman, Señora Brun, distrusts a repairman in her home and makes a costly mistake trying to protect her possessions from him. In “They Had Seen the Burning Bush,” a young wife suggests her husband, a boxer, take a lower-status job and loses more than the security she sought from him.

In one of the stories written in a lighter tone, “Family Life,” Nicolas is a different person each day in a different household. He thinks he is caught in an endless loop of a computer program for soap operas he wants to write. “For several seconds he had borne the unbearable impression that reality had shifted, that everything he believed in was false, that his points of reference suddenly made no sense.”

Heker presents a new reality to readers, too, with her deceivingly simplest of prose. Her characters are authentically rendered—layered, well meaning at times, but flawed. She manages to draw out, in a phrase or two, their unsettling thoughts and actions—subtle or overt—that change relationships. Often, characters are left wondering about what they have lost and why. And even though these stories are easy to read, to catch the moment when the direction of the stories changes for the characters may take re-reading. Do it, because through Please Talk To Me, readers will be affected by those moments, too.