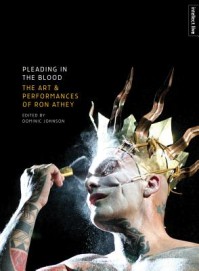 The Art and Performances of Ron Athey
Edited by Dominic Johnson
Intellect Books ($35.50)

My first introduction to the work and life of Ron Athey—life as in saint’s life, a hagiography—was through Catherine Saalfield Gund’s documentary Hallelujah! Ron Athey: A Story of Deliverance at its debut in the 1998 Chicago Underground Film Festival. Here was a response to and from the Plague Years of an AIDS crisis that was already historical, something younger artists had read or heard about but had not personally experienced. Athey—even in two-dimensions, spread across the silver screen—changed that, forcing feelings onto the alternately enraptured and flinching audience, an audience that staggered out of the theater as, perhaps, ancients used to stagger out of the mists of the Delphic shrine: dazed and burdened with enlightenment.

In Athey’s Martyrs & Saints, the artist embodies the iconic, dragging Saint Sebastian into the modern world. As described in this new book edited by Dominic Johnson, “a mass of needles criss-cross the skin of his head, and are bound in acrylic thread to produce a brutal crown of thorns. Collaborators flog him with whips, insert arrows into the skin of his arms, legs and torsos, and bind his tortured body to a stake.” Blood flows, and while it is impossible not to associate blood, in the context of such an image, with redemption—with cleansing, as the church songs say—it is HIV-positive blood, coded by science and society as impure and infectious and polluting. The piece shares pain with us—offers us a broken body, blood—forces us, the audience, into a kind of communion. We are drenched in lament, shaken with prophetic rage, confronted with suffering and mortality in a concrete, quivering form, and shown something of society’s recently conditioned paranoia about bodies and body fluids via this channeling of an archetypal sacrifice—a body made porous, pierced, and dripping with that which is most intimate and essential.

In droplets and smears, used like ink for printing on paper, mixed with sweat and pouring down in sheets, Athey’s work gives us a babel of blood—that hyper-signifying symbol presence of which, outside the body, roils with visceral potential “meanings” in multiple registers—such as, to name recurring themes in Athey’s work, sex and religion, pain and intimacy, life and death. That could, of course, be a list of abstractions, clichéd terms for categories only half-acknowledged, experientially ignored. What Athey does is defy abstraction, using, as a tool, his own body. There’s an account in Pleading in the Blood of a performance from 2004 called Judas Cradle, named for a medieval torture device with a pyramid-shaped point, around which the rectum of the victim contracted and loosened, his own weight pushing him down and open. In the account here, someone swiped the specially prepared, polished, and waxed prop from backstage, forcing Athey to make do with “a splinter-ridden hatchet job.” What follows sounds like torture, to be sure, but in the telling—tellingly—becomes something else, transcending mere pain or witness of pain. Juliana Snapper describes the sounds in the space where the show took place:

Mewling sobs tightened around melodious wails, fuelled by long rattling pulls of snot and air. I have since thought of Ron’s impaled rectum as simply the lower portion of his glossolalic throat—a part that does not speak but rather pulls sounds up and out of witnesses to its breach.

This surely gets at something key to Athey’s art—the vulnerable presence of the body, which, via its opening (to use the organic language offered here), pulls the audience into a shared experience, into new and immediate perceptions of reality.

This collection is, remarkably, the first such set of essays devoted to Athey’s work, studded with, even more remarkably, photographs from across a career characterized by a resistance of the production of images and traces generally associated with the business of performance art. Early archival photos of Athey in the duo Premature Ejaculation, for instance, are coupled in this volume with reproductions of Catherine Opie’s large-scale studio shots of Athey and collaborators, images choreographed to capture some essence of the performances from which they come, as when Athey is cradled in the arms of Divinity Fudge, a reimagined pietà. The writers anthologized here offer contextualization as well as critical theorization, speaking as audience-members and friends, tattoo artists and collaborators. Bruce LaBruce describes Athey’s removal of objects, in performance, from his anal cavity as “like a magician pulling reams of knotted scarves out of his sleeve,” while Dominic Johnson considers Athey’s emphasis on the presence of the body in relation to that “shift in semantics of touch” that came in the wake of AIDS (“the implied horror of body fluids” that the focus on prophylactic protection implies, the widespread “anxieties around the body’s openings”), and Amelia Jones articulates an argument that “Athey’s work elicits a bodily response that is also always already an affective and aesthetic response.”

Athey, as several contributors here note, is a deeply literate artist, using and entering into and reworking and embodying texts in his performances but also, as evidenced by several fascinating pieces here, a creator of texts, many of which address his upbringing (the realm of hagiography) and the ongoing centrality (albeit, perhaps, ambiguous) of religion to his life and work. Raised by female relatives with prophetic pretensions and mental disorders—Christian spiritualists preparing for birthing the Second Coming and, after that, marrying Elvis Presley—Athey details both what he calls the “demented grandiosity” of such worldviews (and their theatricality) and his break from that world. He describes narrating his story to a friend, at fifteen, and coming, by that telling, to “a pathetic excuse for an awakening,” rushing home to beat his head against the floor, knocking free fantastic conceptions while reiterating the visceral truth that he was at least “a piece of animated meat.” Yet Athey is far more than meat, just as his performances are about far more than bodies. What he calls “spiritual feelings” remain central to his work, which, after all, follows a familiar Christian framework of bodily suffering as a path to transcendence. Enemas of glitter stars and double-headed dildos are, of course, not props mentioned in the gospels, but Athey’s passion is no less classical in pattern; the idiom shifts with context, his crown of thorns is hypodermic needles, but Athey represents one of the most compelling contemporary interpretations of the radical—scandalous, as some theologians say—notion that sovereignty can manifest as and be experienced via abjection.