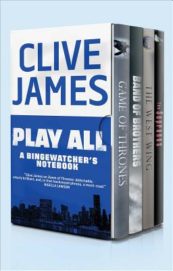 Clive James’s life has been in certain respects a remarkable rags-to-riches story. Raised by his widowed mother (his father died in World War II when his return flight home from Japanese internment crashed in the Philippines’ Manila Bay), James suffered unsuccessfully through his childhood and adolescence in Australia. Eventually he immigrated to England in hopes of finding something more intellectually nutritional than surfing and motorcar racing, and while down and out in London he found just that and more: He did sheet metal work, obtained his second undergraduate degree, spent time as a library assistant, started PhD work on Shelley, performed in the theater as both an actor and a film-reel operator, and, finally, began his career in freelance journalism.

It’s here that an aspect of James’s success story often is overlooked, for James made his transition from lumpen-bohemian to one of his generation’s best cultural critics by first sitting on a couch and gorging himself on television. This equipped him to earn his first livable wage by writing weekly columns for The Observer on everything from BBC documentaries to sports punditry.

In due time, James became a messenger in that very medium, hosting his own television program discerningly titled Clive James on Television. So the essayist who could write poignant and refined prose on the likes of Raymond Aron and Jean-Francois Revel also was at home discussing matters regarding the twentieth century's most fixed and universal cultural signifier. It’s to this universal reference point that James has returned in his latest book, Play All: A Bingewatcher’s Notebook, in which for 200-pages he writes perceptively (if not always compellingly) on some of the most influential and popular television series of the last twenty years.

With the “thematic collapse and ethical putrefaction of the film industry,” more of us interested in being entertained from time to time with something less strenuous than the poetry of Frost or the paintings of Goya have turned to television. According to James, Hollywood has become too dependent on inheriting its story material from comic books and videogames, and since it’s impossible to fully separate content from its original form, most movies have become mere exhibitions in special effects and choreography. Sophisticated audiences want the cerebrum-stimulating aspects of the art only turned down, however, not off.

Play All has eleven chapters, each of which more or less acts as a stand-alone essay on different series (besides the first chapter, which serves as an introduction). Heavy-handed transitional passages end most of the chapters; this attempt to give the book continuity often comes at the price of coherence. James has always prided himself on showing how seemingly unrelated things tie together, but he's always been most successful at describing how things feel from the inside as well as pinpointing their vital organs.

Writing on The Wire, James sees its central tenet to be that the “war on drugs” is unwinnable: “The show conveys no other message . . . Entertainment never looked more bleak.” Aaron Sorkin’s West Wing president is “omniscient, energetic, an ethical giant, a poet king,” with all the internal conflicts those entail; “Sorkin is inspiringly good at giving us a father figure and then proving that the father figure has, if not precisely feet of clay, then certainly a mind that suffers.” Game of Thrones’s “real spine is in the daring of its analytical psychology,” as we are not so shocked by “what Joffrey’s evil streak can accomplish but in what Ned Stark’s virtues fail to prevent.” These are wonderful sentences verified by impeccable observations.

Not all of James’s commentaries sparkle, though. For instance, one reason he dislikes Breaking Bad is that he finds the consequences of Walter White’s criminal career so repulsive. As a lifetime reader of Shakespeare—he has said that he brings the Bard’s collected works with him on all his flights—James would be expected to be much more comfortable with invocations of tragic heroism than the average viewer. After all, is Walter White any more morally reprehensible than, say, Macbeth or even Lear?

James also sometimes seems unable to stop himself from disgorging right-wing talking points. Never far from his mind is the civilizational menace of Islamism, the culturally-weakening affectations of political correctness, and the corruption of union bosses. The failure of the short-lived, maudlinly militaristic 2005 series Over There is blamed on its Arab enemies “being nothing like us.” For James, they “might as well have been Transformers.” Rather than blaming the show’s creators for these walking-dead adversaries, James finds fault in the flesh-and-blood people they are meant to dehumanize. As for Western women, James thinks they ought to be thankful they aren’t “over there,” where the real humiliation and suffering takes place.

James credits corporate higher-ups listening to their customers for the rise of television's success. Television “serves the producer, but only because it serves the consumer first: capitalism the right way up.” It’s doubtless James has always seen himself as little more than an enlightened dilettante, so it isn’t surprising to read him professing more trust in the consumers of culture rather than its students, nor is it much of a surprise that he is sure books are still where we need to turn for subtlety and knowledge. The best television can do is "not tell us outright lies about . . . reality. For subtleties we still need books.” Clive James’s preferably.