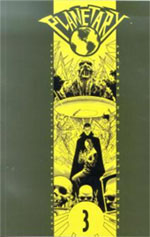 A story of great complexity and grace, Planetary is about a group of extraordinary people with peculiar skills whose job it is to uncover and tidy up the sometimes ugly secrets of the last century. Elijah Snow, Jakita Wagner, and The Drummer—the three “mystery archeologists” of the Planetary Organization—are an odd set of heroes, though they’re well-defined by their conflict with “The Four,” a group of bad-willed science-conquerors who have engineered a series of secrets meant to keep humanity out of touch with the greatest wonders of the world (e.g. alien ships that run on quantum computers or lost civilizations built on high technology and advanced spiritual abilities).

The third volume of this ongoing story, Leaving the 20th Century, increases the dramatic tension and more fully realizes the internal consistency of the Planetary world and mythos. As the Planetary team hits The Four harder and scores some success against them, their past trials are further revealed, which makes their current struggle to share the wonders hoarded by The Four with all humankind more meaningful. John Cassaday’s art, which spans styles from retro-realism to twisted special effects, has grown more sober in these issues, and to good effect: much more is done with much less, and the artist’s intense palette of emotional expressions for his characters is especially noteworthy. As in the best graphic narratives, Ellis and Cassaday each complement the talents of the other.

Leaving the 20th Century also reflects writer Warren Ellis’ abiding interest in pulp fiction and pop culture, beginning with a flashback to Elijah Snow’s encounter with two fictional creations of the 19th and 20th centuries: Sherlock Holmes and Count Dracula. Holmes alludes to the “open conspiracy” of H.G. Wells, and tries to convince Snow of the goodness of its vision. Such glances back to fictions of the past pepper these stories: we see Snow learning “the art of detection” from Holmes, and later leading his team to awaken a Dreamtime ancestor. “In the Lost City of Opak-Re,” the one issue that probably best nods to such fading fictional worlds, goes further than paying tribute to older fantasies: in a single, expertly-realized stroke, Ellis and Cassaday turn the Tarzan mythos on its side, appropriating territory from the imagination of Burroughs in order to make the world of Planetary more substantial in the minds of its readers.

The true strength of the series is that all its strange fantasy—from sci-fi hardware and aboriginal creation tales to kung-fu villains and antebellum American astronauts—somehow makes the relationships between the characters we care about even more real. The “mystery archaeology” that forms the core of Planetary’s plot may certainly draw readers to the books, but the sustained and complex varieties of love and hate between the characters gives them a reason to stay. Leaving the 20th Century is a capstone in the expanding world of Planetary, but it will be marvelous to see what will yet be built above it.