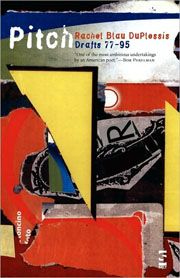 Perhaps best known for her feminist critical works The Pink Guitar: Writing as Feminist Practice and Blue Studios: Poetry and Its Cultural Work, Rachel Blau DuPlessis has also created, as Patrick Pritchett put it in a review of Drafts 1-38, “one of the most sustained and magnificent meditations written by a contemporary poet on loss, presence, and the haunting persistence of language to redeem what has vanished.” She began this process in 1985 with the publication of the first two Drafts in the journal Temblor. Nearly twenty-five years later, we are presented with the latest installment of this life poem, a work that could be put into the same category as Ezra Pound’s Cantos, Louis Zukofsky’s A, and bp Nichol’s Martyrology.

In an essay in Blue Studios, “On Drafts,” DuPlessis stated:

“Craft” and kinds of craftiness follow the intensities of the writer’s need, for the poem or the writing. At this moment, making poetry, I like best the tactile quality of moving language around, sculpting it into shape, making bodies of syntactic manifolds that suggest . . . meaning flickering in and out of focus, within and against the enormousness, and the enormity, of silence.

In addition to her feminist perspective, the lyric arouses her passions: “the desire to criticize and undermine the lyric, to wring its ideology out, and to envelop it in the largeness of another practice, has been consistent as a motivation for twenty-five years.” Then there is the concept of commentary attached to the Jewish bible, the Talmud:

This commitment to analysis within the poetic act and text create a powerful force for me. This impulse to critique has long been joined with a tonal and structural interest in what I was calling (from about 1981 on) a “Talmud” poem, by which I innocently meant something like midrash—doubles and redoubled commentary, poetry with its own gloss built in. My idea was sidebars, visuals, anything to create “otherness inside otherness.”

This perhaps formidable preamble is needed prior to encountering Pitch, as it is only the latest part of the much longer Drafts. Having said that, Pitch has been issued as a free-standing entity and, as such, must be evaluated on its own. DuPlessis is aware of this limitation and entices the reader with the plenitude of “Draft 77: Pitch Content,” reminding us in this title that there is presence in absence. There is also a deft music here from the beginning, reminding us that rhythm is not merely isolated in meter:

would show itself as wall,
writing scribbled on off-cuts,
marks smuggled into cracks,
opening, penetration, fold, hinge;
leave something, leave anything.
A dot, a smudge, a scrap.

Note the play of sound as this segment opens with a flow of “w”s, of “o”s, of “on-” and “off-cuts” leading to the “cracks” which are attacked by the thesaurus. Note in particular how that last word “scrap” creates a “crack” in language as it redeploys the letters into a splay of sound with that “k” refused entry by the “p” which is prepared for by that indented “opening” which penetrates our psyches. This is a lesson in how sound reappraises rhythm, but there is more in this opening salvo, such as the play of rhyme in:

A dirtied ragged
Unbearable hum
Beyond beyond
Understudies from.

This and more creates a desire within us to explore further into this tome, this tomb of language. Reading further reveals flaws as well as new delights—occasionally an overwrought line not only falls flat but descends into oblivion, as in “And in this space a birth of enigmas / to which one owes one’s own enigma”—but these minor flaws do not detract from the magnitude and magnificence of what has been created. There are astonishing moments such as part 17 of “Draft 85: Hard Copy,” with its parallel series “Who registers deep lakes of darkness; / Who receives the streak of light upon water? / Who is aroused by the saturated ripples at dusk?” This is a voice of celebration, of beauty.

There is much in Pitch to be appreciated, much that will leave you searching back to the beginning to determine how it is we have arrived here. And much that will have you eagerly awaiting the next part of the saga. With her ongoing Drafts, DuPlessis continues to solidify her position as one of the great contemporary epic poets.