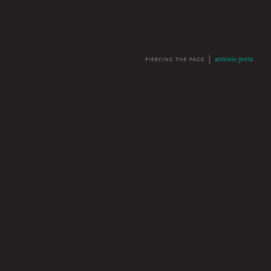 A name is exactly the absence of definition.
—Breyten Bretyenbach

In order to make a decision I’ve chosen another name
In order to change paths I’ve called the peacocks together
—Antonio Porta, “The Sources of Deception” (I, January 29, 1968)

It begins with a name—or rather, a door. Originally publishing under the name Leo Paolazzi, the poet of Piercing the Page became Antonio Porta (1935-1989) in 1960. Ostensibly meant to “pay homage to the great Milanese poet Carlo Porta,” as the solid introduction by editor Gian Maria Annovi informs, “porta” also means “door” in Italian. This can’t be mere coincidence, for Porta’s life’s work plays intensely with the many resonances of his chosen namesake. As in the Kafkaesque proportions of “Before the Law,” wherein each door implies a greater one behind it, Porta’s poetry keeps opening itself into new realms of expression. The door functions as a liminal space between the self and the world around it, a hermeneutic circle that opens both ways.

It’s fitting, then, that we see Porta occupying a threshold of poetic experience that both embraces the past and presages the future. At times reminiscent of the visual and material experiments of Mallarmé, Porta’s oeuvre also prefigures the newspaper and duck-hare poems of Valerio Magrelli in terms of its investment in playing with the limits of poetics, politics and metaphysics. In this light, Porta might also serve as a door between his even more experimental Gruppo 63comrade, Edoardo Sanguineti (1930-2010), and the Marxist cultural critic Antonio Negri of Art & Multitude. A predilection for the episodic and sequential, including lists, letters, series, calendars, dates, chronicles, and numbers—these are the interstices where Porta’s poetry lives and breathes.

One of Porta’s visual poems—from April 9, 1963, to be exact—employs a newspaper-ransom note approach to great effect:

between atrocious suffering       the marvels of Earth 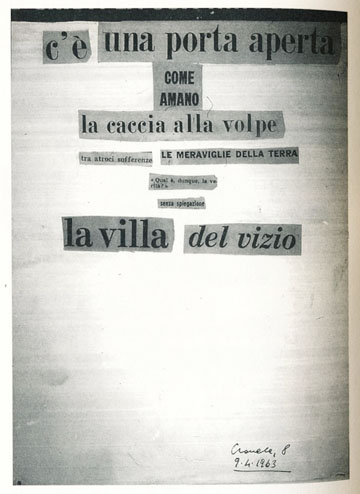 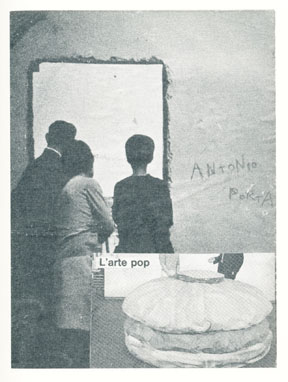 On the adjacent page, we see three people with their backs to us staring through a door, or perhaps a window—a threshold, at any rate. The lower right hand corner of the collage asserts “pop art” while two headless bodies discuss a giant hamburger of indeterminate material. Directly above the burger, and to the right of the three lookers, the name “Antonio Porta” is inscribed on the concrete (get it?) wall, a large graffito functioning as both signature and signified to the hermeneutic rectangles, if you will, of the work. To me, the last three visual poems of the series, including this one, seem to put Monty Python’s collage animation in conversation with punk rock’s penchant for humorous cut-and-paste.

As with all good selected compilations, the offered parts of Piercing the Page suggest a greater collected behind the next door. After staring at the six visual poems included here, the visceral response is simple: more, please. One could say the same regarding the sequential offerings and anaphora-driven single poems alike. Featuring the works of seven translators, and concluding with a critical essay by Umberto Eco, Piercing the Page proves there are indeed many points of entry to the poet known as Antonio Porta. Here are two brief excerpts from “2 (7.26.80)” of the excerpted series poem “Heron,” a poem begun in 1979 and ultimately finished (abandoned?) in November 1987, and one that rivals Mahmoud Darwish’s epic exaltation of the hoopoe:

We don’t get to read “Heron” in full, but we get enough of the poem to wish we could. Porta’s dialectical poetics of the self—which struggle to delineate the metaphysical tensions between bird and bard, body and mind, silence and sound, life and death—are on display here, just as a much earlier poem, “Dialogue with Herz,” depicts the manifold and dialogical tensions between all of these elements at once. To begin again with a name, keep in mind that “Herz” means “heart” in German:

“I was seized by terror turning into a hare,
and then accepting, I got used to it.”
“If it were true I could kill myself.” “What
happens to hares?” “A simple death.”

“For a long time I’ve wanted to fly
through the trees: to become a bird and
discover a tunnel in the summer foliage,
to reach the ground.” “To hit the roots
and lick up nutritive juices.”

Who is having this conversation with Herz? Following Pascal, we might say that the heart has its reasons that reason never knows. Or, thinking of Anne Sexton, we might infer that the truth is a lie is a truth. Then Porta opens another door of interpretation by ending the poem with a question: “Will the power of day and night never end?” Upending T.S. Eliot, we might come to believe that in the end is our beginning.

What is lost in excerption is gained otherwise in this bilingual edition, which intimates the impossibility of arriving at a completely satisfying sense of completion to the art of translating poetry, namely that of the Italian ilk. If sound is as important to Porta as novelist-semiotician Umberto Eco contends—incidentally, “Eco” indeed means “echo”—then a successful rendering into English occurs despite, or because of, a poem’s multifarious untranslatability. We see the same difficulties in translating Spanish-language poets from Vallejo to Machado; the deceptively easy and hyper-sonorous Romance languages prove difficult to translate convincingly into an English that appears sonically challenged by comparison. Things fall apart based on an exclamation point or vernacular turn of phrase, and always, always, sonority suffers—either from too much attention to it in the target language, or not enough. One might argue that to contain the multitudes of Porta à la Whitman is not the point; rather, we want to set them free, to “sing my freedom / I’m just out of prison.”

Piercing the Page, in other words, provokes a sequence of questions on the ground, a word alternately used for “suolo” in “Heron,” and “fondamento” in “Dialogue with Herz” in the above citations. Though “Earth” and “earth” typically derive from “terra,” the excerpts above can support this valence to “ground” as well, just as for various reasons the translations eschew the possibilities of “soil” and “foundation.” One could play with the sounds of these few lines of “Heron” a bit, gaining and losing something by going with “the hands clap in the air / alongside your wings / suddenly find me rooted to the ground.” Similarly, the choice of “power” for “l’arbitrio” at the end of “Dialogue with Herz” doesn’t ring quite the same in English as the more accurate “Will the will of night and day never end?” In the end, a translation succeeds when it intimates a world of possibility lying beyond its myriad impossibilities.

Speaking of lying, “The Sources of Deception” seems to get something right in section V of February 1, 1968:

Indeed, we are like a door. Waiting defines our being, and crossing a threshold means irrevocable transformation. Then again, “stanza” also means “room,” and that must mean something, too. What does it mean to enter the room of a door? Pierce the page, dear reader, and find out.