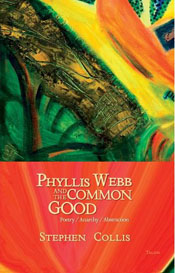 Poet, broadcaster, public intellectual, recluse, artist—Phyllis Webb has been appearing, and disappearing, from public life for more than half a century. In Phyllis Webb and the Common Good, Stephen Collis avoids any attempt to pin down this elusive poet. Sparing readers from trite autobiographical details and dry publishing histories, Collis meets Webb on her own terms enacting “the poetics of response” that he cites as a central feature of her work.

It is by strange and untraceable paths that one poet finds her way to another, seeking what she needs. It is wayward, unpredictable, governed as much by chance as by personal proclivity. Strange attractors of the imagination’s companions.

Collis, the author of two collections of poetry (most recently 2005’s Anarchive), engages as a theorist and poet with Webb. His study is a dense, thought-provoking, and at times exquisitely written response to a poet who deserves no less meticulous attention. Collis shares Webb’s conviction that “The proper response to a poem is another poem” and delivers a study that “flows from this stricture” even in its prose form.

Phyllis Webb and the Common Good is comprised of three essays. The first essay traces Webb’s “poetics of response,” beginning with a close reading of her prose-poem statement on poetics, “There Are the Poems,”

An editor asks me to put it all down: the reasons I write. And I thought "it" was a gift. Homo ludens at play among the killing fields of dry grasses. Playful woman making a space to breathe. "There are the poems," Sharon says, she means, between the critical flash. There are the poems, like fists wearing birthstones and bracelets, her ‘roses & bliss.’ And there are the poets doing what? And why, the editor asks. What does he want? Contributions to knowledge? Civilization and its discontents? Chaos among the order—or, oh yes, french doors opening onto a deck and a small pool where we can watch our weird reflections shimmering and insubstantial? (Hanging Fire)

Webb’s poetic statement is a response to an editor’s request that she “put it all down,” but she undermines his authority—not to mention the need for such statements—by reframing the piece as a response to another poet. “There are the poems” is a line borrowed from Sharon Thesen, and while the editor remains unnamed, Sharon is affectionately mentioned. But Thesen, like most Canadian poets, is a mere footnote in this study that rightfully locates Webb in a literary field that extends far beyond region and nation.
From Webb’s allusions to T. S. Eliot to her shared poetic sensibilities and associations with Robert Duncan to the traces of H. D.’s Sea Garden that appear in her own collection, The Sea Is Also a Garden, Collis meticulously traces Webb’s dialogues with other poets. But Webb’s poetry and criticism have also solicited response. Phyllis Webb and the Common Good is one example of the form these responses have taken, but regrettably Collis offers few insights into other poets’ dialogues with Webb.

A “poetics of response” is not limited to citation or allusion. As Collis explains, “The argument of this book, however, is as much about the lyric and the evolution of the lyric towards sequence and abstraction as it is anything else.” For Collis, and apparently for Webb, the poem is response. As such, poetry implies an ethical responsibility to the other, and by extension an obligation to question self/other dichotomies, especially the traditional lyric’s I/you dichotomy.

Collis is not the first critic to write about Webb’s innovative use of pronouns. In Naked Poems, the minimalist work for which Webb is most acclaimed, the “I” and “you” are both distant and fused. Webb’s use of pronouns undermines the traditional lyric’s division between the speaker and listener, placing the speaker as part of the poem’s collective audience. What distinguishes Collis’s reading in this instance is his insistence that Webb’s move from a self-centered “I” to the collective “we” reflects her broader interest in the politics and aesthetics of anarchism. While the existence of her “Kropotkin Poems”—an incomplete poetic response to Russian anarchist philosopher Peter Kropotkin—supports Collis’s case for establishing Webb’s anarchist poetics, his reading of Naked Poems through this lens is deceptively narrow.

Although Collis mentions “grounds for establishing the lesbian ‘love story’ of the poem,” he otherwise dismisses any discussion of Naked Poems as a poem about female desire. Given the pre-Stonewall context in which the poem was written and published and the objectives of Collis’s own study (to situate Webb as poet/activist/public intellectual), downplaying this reading of Naked Poems is a notable oversight. Here, rather than respond to Webb, Collis permits his own interest in anarchist poetics to subsume the subject of his study. This tendency is also apparent in the final chapter, “On Abstraction.” In what promises to investigate Webb’s move from writing to painting, Collis submerges his subject in pages of preliminary discussions on abstract art.

This is where Phyllis Webb and the Common Good may appear to falter—at least for some readers, but it is important to understand this apparent shortcoming in context. Collis is working within a tradition of literary criticism—the poet’s response to the poet. Like Duncan’s unpublished H. D. Book, which is as much about Duncan as it is about H. D., Collis’s response to Webb is about the author and subject’s shared relationship to poetry and criticism. The reader searching for a concise study on Webb may find Collis’s theoretical tangents tiresome, but just as a good poem has a responsibility to act, good literary criticism should do more than simply describe an author’s accomplishments or critical reception. As Collis puts it, “For the reader, there are the poems—engaging practices in the public sphere. We can respond to Webb’s responses—this is in fact our responsibility.”