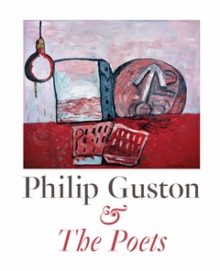 As painter Philip Guston (1913-1980) and poet Clark Coolidge used to discuss (in conversations recorded elsewhere), the creative acts of painting and poetry have much in common. Guston liked talking with poets, and he liked reading their work. In fact, he read deeply and widely—from Baudelaire, Rilke, and Rimbaud to Beckett, Kafka, Kierkegaard, Jung, and many more.

Robert Hughes has written that "in terms of intensity and influence," Guston stands above all other American painters of the 1970s, because of his "leap back into figure painting from 'high' abstraction." Although he went through several definable phases over a long career, the most momentous change came after the riots at the Democratic National Convention in Chicago in 1968. Guston wanted, as he said, "to bear witness." He turned to painting banal, everyday objects—books, shoes, hands, lightbulbs, clocks—which he called "tangibilia" (or "crappola")—and, occasionally, hooded Klan figures.

Although the primary focus in Philip Guston & The Poets is on his work from that time, the gorgeous reproductions are sometimes juxtaposed with examples from earlier periods, to startling and instructive effect. An exhibition at the Gallerie dell'Accademia in Venice was the occasion for this publication; rich with Venetian and Renaissance treasures, that museum has a vested interest in showing Guston, who loved Italy and its painters—most notably Giotto, Masaccio, Piero della Francesca, and Tiepolo, as well as de Chirico. The hyperbolic preface by Paolo Marini, the museum's director, comes as no surprise.

The exhibition's curator, Spanish art historian and critic Kosme de Barañano, provides the commentary. The following poets and poems furnish his framework: D.H. Lawrence, "The Ship of Death"; William Butler Yeats, "Byzantium" and "Sailing to Byzantium"; Wallace Stevens, "The Sail of Ulysses" and "Domination of Black"; Eugenio Montale (translated by Jonathan Galassi), "Mediterranean," "Summer," and "The Lemons"; and T.S. Eliot, "East Coker." In keeping with the Italian emphasis, de Barañano leans especially on Montale. The rationale for this entire venture, however, feels a little shaky, or maybe it's better to say that it foils initial expectations—except in the case of Eliot, there is no direct evidence that Guston knew or cared for any of these poems or poets.

Late Guston paintings are surely "unique and challenging," and "they resist the siege of interpretation." Cartoonish for one thing, at first glance they may seem to be simple, although they are anything but. As de Barañano writes, "They do not belong to the traditional iconography of Western painting, but rather to the aesthetics of the metaphysical, transcendentalist, or imagist poets." They are more like the stuff of dreams, sometimes disturbing.

At the outset, de Barañano is careful not to claim too much for his comparisons. Aiming to "open parallel sensations," he wants to understand Guston's pictorial work "in relation to the poetic thought" of these five poets, "who also sought to express ideas not previously formulated." They are, he says, "the painter's spiritual brothers."

Parallelisms abound. De Barañano observes that Lawrence's "The Ship of Death" and many of Guston's paintings speak of the inevitability of the end. He also notes that as Yeats describes the act of writing in "Byzantium," so Guston describes artistic creation in his painting The Line. Such statements expose the hazards of this book's approach: death and poetry are two familiar poetic concerns, hardly exclusive to or even particularly characteristic of these poets. Still, we may agree with the statement that "all of Guston's late paintings are not only his 'Ship of Death' but also his 'Sailing to Byzantium,' his rite of reconciliation: his journey in search of his own vision of painting and of eternal life for the images of Painting."

Turning to Stevens, de Barañano says: "Nearly all of 'The Sail of Ulysses' . . . seems to refer to the themes of the night soliloquy which also defines the last phase of Guston's work." True enough—Guston usually painted at night, with artificial light—as the following is, too: "As with Stevens's poems, it is difficult to summarize what the image in a Guston painting is, what story it tells, and what it means." Again, this is hardly unique to Stevens. One might have sympathy for an art historian attempting to deal with this very demanding poet, but neither the Stevens aficionado nor the unversed reader is well served. De Barañano gives the distinct impression that he is flailing about, struggling to stay afloat.

The similarities between Guston's "simple yet strange" images and Montale's Ossi di sepia (Cuttlefish Bones), as well as "their political and existential concerns," is enough to convince de Barañano that Guston knew Montale's poetry, despite lack of proof. "Guston's canvas is like a beach that gives refuge to a random pile of debris and broken, dislocated things." Both artists revolted against the elevated and rhetorical fashion of their fellows, in favor of "a more humble, more agile vocabulary." They also share "a fragmentary syntax." While one might not share de Barañano's certainty (and might come up with other fitting matches), the pairing of these two artists is surely the most useful and rewarding one.

Last comes Eliot, the only poet here whom Guston explicitly references in a painting (entitled East Coker—T.S.E.). De Barañano hauls out an old Eliot chestnut: "The purpose of Guston's images, in terms of the objective correlative, is not to describe feelings, but to reveal an emotion, a thought." He also states that, "while both [Guston and Eliot] are highly educated and technical, they nevertheless allow themselves to be led by their instinct."

Overall, in an analysis like this, speculation is assumed; wild associative leaps are fine (the footnotes are rife with them); interpretation is interpretation. But at this point, the reader may feel adrift, on a fishing expedition in the course of which no fish have been caught. Some have been seen, yes, but only dimly. How to get back to shore?

Like a lifeboat, the epilogue, "From the Iliad to the Odyssey," appears just in time. Invoking two additional rather well-known poems, it rescues both the reader and the commentary, and the consequence is a sense of exhilaration. In the end, de Barañano says, "painting, like poetry, doesn't need descriptions but rather only accepts approximations." His best approximations are of the former. "Guston's enigmatic images invade us like disturbing dreams," he writes, "where some objects may be recognized but not their meaning. Guston creates a personal mythology, which arises in part from the world outside . . . but also from his deepest subconscious." That is a useful summation of the "visual poetry" of Guston's paintings.

Following the epilogue, a pleasing appendix of sorts includes brief introductions of each poet, full texts of the poems (and other material), and as a bonus, "two parentheses" of Guston's drawings made specifically for poems of Clark Coolidge and Musa McKim (Guston's wife).

Art criticism and literary criticism, at their best, can be illuminating and thrilling. In the present case, it might have been better to let the poets speak more often for themselves. Nevertheless, this is a beautiful and stimulating book that goes a long way to making intelligible the last and perhaps most quizzical phase of Philip Guston's work.