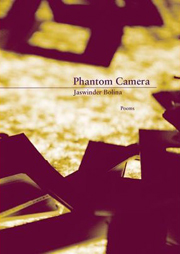 In “Writing Like a White Guy,” an essay for The Poetry Foundation published in 2011, Jaswinder Bolina addresses the challenges faced by writers of color who want to resist “doing race,” without discrediting the difficult work of representing the American minority experience. His tactic, at the time, had been to downplay the issue altogether. “I avoid the subject of race in my first book,” he says. “[It’s] a subject I don’t offer any attention to.” Indeed, the poems in Carrier Wave (winner of the 2006 Colorado Prize for Poetry) concern themselves more with linguistic play and slippery signifiers than with skin color or class. But the tenor of his new book, Phantom Camera, is much different:

I’m brown-skinned and slender,
of unremarkable height and blue-collar origin.

I was afforded broad tutelage in the liberal arts and sciences,
but none of these is enough to temper the onslaught of winter.

I never really believed they would be,
but I wanted to say the onslaught of winter out loud.

These physical and socioeconomic characteristics, listed by the speaker of “Oops Canary,” coincide precisely with the author’s actual lived experience. Bolina’s decision to introduce autobiography signals a move away from the odd ether of signifiers and theory into the raw material of contemporary life. Still, he manages to tease out and complicate the ethereal function of language, since his speaker seems able to conjure the phrase “the onslaught of winter” only as a result of his American upbringing.

In more sophisticated ways than in Carrier Wave, Bolina continues to bridge real-life with language. In “Course in General Linguistics,” the speaker recounts an incident in which a “toothless yahoo” hollered slurs from a broken-down Cutlass, calling him “sand nigger,” wishing he return to his home country. The speaker realizes the offender’s mistake:

so I set about explaining
how he’d gotten the country of origin wrong,

how my folks are from green fields
and there isn’t any sand there,

and sure I’m brown, but I’m harmless.

I mean, I don’t even believe in God.

The speaker’s humorous attempt to explain geography, to excuse himself from the yokel’s ignorant label, undercuts the epithet’s hideous signification. This echoes a passage from the aforementioned essay in which Bolina posits that it’s “only in America that…any brown-skinned body can have a “camel fucker” or a “sand nigger” hurled at him from a passing car.” To be fair, probing an author’s publishing history to equate “author” with “speaker” is, of course, unnecessary and, occasionally, counterproductive. But it does raise the question of what constitutes a “self”: the author’s 3D physical being? or an identity put down in published record, constructed in language?

Phantom Camera is full of these kinds of questions, and Bolina does well to resist definitive answers. Instead, he suggests various forms for the self: a plaid torso in a phone booth, reclining on a back porch, “bronzed and blithe,” or a mind careering about in a body, now welcomingly racialized. He does not shy away from the “first-generation, minority stuff” he had so ardently avoided. And if the occasional, abstract exposition of Bolina’s first book became too frequently superfluous, less effective than poems that “do theory,” the poems in this book succeed in performing theory and race in ways that validate both.

Bolina succeeds also in aggregating these racialized bodies, in bringing individual minds together, as in the closing lines of “Federal Scene,” a poem which asks the reader, ostensibly American, to consider her reflection:

The afternoon a balm that spread itself over the empire so that departing the breezy loft on Catalpa in afternoon you’d check your reflection in the stainless steel of the toaster, hold the glint of the box with one hand and solve the jigsaw of your hair with the other, and you and I and America would be thinking, This goes here, or, This goes here, and how certain this seemed, and how certain we seemed.

fanciful mammal, you charmed conspiracy
of nucleotides, all your unwitting electrons in their right place.

This “charmed conspiracy” of chemicals and particles, this coincidence of matter, is as close to a definite answer Bolina provides to the question of what constitutes an identity. Interestingly, “conspiracy” comes from a Latin verb that means, most literally, “to breathe together.” And so, Bolina returns to the speech acts people share, rather than dwell insistently on issues of income or pigment. This allows ample space for Bolina’s lyrics to explore intersections between physicality, nationality, and language. After all, “phantom” can mean both the visible image of something incorporeal—a ghost—but also a mental image. Bolina’s latest book handles the interiority of mind and the exteriority of body with equal parts intelligent intensity and polished wordplay.