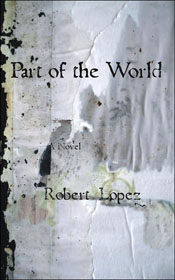 Perhaps it was Samuel Beckett who first projected, or at least perfected, the art of the novel in which almost nothing ever happens. In each of the three parts of his trilogy Molloy, Malone Dies, The Unnamable we are offered interior monologues of a mind so tripped and embedded by itself that it can't rightly tell what is what—yet it does so on and on for pages, magicking the reader along with just the marvel of its prose.

Similarly, there are few major events in the 181 pages of Robert Lopez's debut novel Part of the World. "I'm not sure how I had the money to buy the car," says the nameless narrator in the first line. "Sometimes I know the particulars when asked but I just as often forget." Thus begins the rambling of a character so meticulous and absentminded at once that his consciousness—rendered to us in Lopez's exacting, infectious prose—becomes a sort of textual optical illusion; we have so much information yet we know almost nothing. Even as the narrator spends pages describing the condition of his car, his process of renting an apartment, his odd friendship with his neighbor, and even his maintenance of a logbook recording what side of the bed he wakes up on and whether or not he has an erection, it never really comes to a conclusion. Despite, and perhaps in light of, this flatline, it is impossible to stop reading; these mundanities go on in wondrous ways. A playfulness is provoked: "Whenever I see tits I wonder if anyone has touched them or when was the last time someone had touched them," he says about the chunky man he buys his car from. "And idle thoughts should go unexamined."

Another, stranger level to this text is what's left within the strange erasure of the narrator's mind. As is mentioned in the first line, he often loses track of what he's said. Certain phrases or ideas are repeated at several different moments throughout the text, each refurnished with new surrounding detail, causing a slow reveal of the fractaled memory of a man left mostly to himself. The narrator's relationship with a neighbor slowly blooms and withers in its ways (occasionally he says he just calls her at scheduled times to be polite; later they masturbate watching each other from bedroom windows; later they share a bed but can't seem to touch. Things continue to expand further until the narrator's insular sexuality becomes so odd and frustrating it's almost painful. In certain moments the strand deteriorates even to the point we have to wonder how benign this man is. Two distinct sections of the novel find him slipping into a third person, symbolic form of speech, both of which seem to refer to the possibility of violence:

And then the first line of the next paragraph: "Faust spent the night, I think." It remains impossible to know what really happened—if the narrator is struck with flights of fantasy, of vision, or if he's actually more volatile than he lets on and/or remembers. As in David Lynch's work, the bigger questions are left open, only slightly shredded, making them that much more disconcerting.

Beyond any discussion of occurrence in Part of the World, though, the real treasure here is Lopez's writing. He's so in control of his character's voice and the layering of thought that to call him a more pleasantly imbibed Beckett seems precise. Part of the World is a book to be read with delight and wonder—and some slight miffing that it's over.