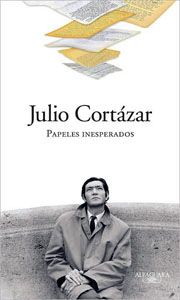 Published twenty-five years after Julio Cortázar’s death, Papeles inesperados (Unexpected Writings) brings together a vast range of little-known texts by the Argentine author. Though not all technically “unpublished” works, many having previously appeared in newspapers or magazines, this trove varying in style and genre offers Cortázar fans and scholars a fresh look at his work. Coedited by Carles Álvarez Garriga and Cortázar’s literary executor and former wife, Aurora Bernárdez, Papeles inesperados is among the most important books published in Spanish in 2009.

Jorge Luis Borges said that while Mexicans descended from the Aztecs, and Peruvians from the Incas, the Argentines descended from boats. That connection, closer to the old world than the new, has often set Argentines apart culturally from other Latin Americans. Even to call Cortázar an Argentine is incomplete. Born in Brussels in 1914, he grew up in Argentina but moved to Paris in 1951, where he wrote most of his notable work and where he died. While writers like Miguel Ángel Asturias and Gabriel García Márquez were forging a style that would become known as magical realism—based upon the very history of the Americas, where one need not look beyond the reality of this world to find the magical, the astonishing, the marvelous—Cortázar would be influenced by surrealism and the novelists of the nouveau roman like Alain Robbe-Grillet and Philippe Sollers, for whom punctuation and syntax were as important as words in conveying character and setting.

Cortázar’s 1963 novel Rayuela—translated by Gregory Rabassa as Hopscotch, one of the first works of the Latin American “boom” to enter the English language—employs a stream-of-consciousness narration that can be read a variety of ways: from beginning to end (although we are told that chapters 56 and following are “expendable,” making “the end” an arbitrary notion); according to a table provided by the author that directs an alternative non-linear ordering of the chapters, taking us back and forth and literally inside and out of the text; or any which way we may like, skipping around and reading some or all of the pages. Cortázar knew that the text really only exists at the moment we pick it up, that it is always already something different for each particular reader.

In the introduction to Papeles inesperados, editor Álvarez Garriga describes “la dispersion geográfica y lingüística” (“the geographical and linguistic dispersion”) of Cortázar’s work. He liked holes, lacunae, places without place, alternative ways of entering into the text. Papeles inesperados continues this realm of infinite possibilities. It is divided into three parts: “Prosas” (“Prose”), which takes up almost the entire book; “Entrevistas ante el espejo” (“Interviews Facing the Mirror”); and “Poemas” (“Poems”). “Prosas” is a heterogeneous collection with sections that include (in Spanish) “Histories,” “Moments,” “Circumstances,” and “Other Territories”: unpublished stories and chapters from previous books; prefaces; lectures; reviews; travel chronicles; and articles on politics, art, and culture; letters to and from friends; new events in the lives of his cronopios (those naïve allegorical characters Cortázar invented who are often in conflict with the “fames” and “hopes” they encounter); and myriad other brief texts, many of them less than a page long. We learn of his influences, including Homer, Garcilaso de la Vega, Jules Verne, Edgar Allan Poe, Arthur Rimbaud, Alfred Jarry, Virginia Woolf, Jorge Luis Borges (of course), Charles Dickens (a bit of a surprise), and Jean Cocteau, whom he credits for having forced him to confront modern literature.

A story quite typical of his early work is “Manuscrito hallado junto a una mano” (“Manuscript Found Next to a Hand,” c. 1955). A man discovers that by thinking of his aunt when he attends concerts he wreaks havoc on the musicians: violin strings break, the piano top falls with a crash, the lights go out in the auditorium. With this newly discovered power he travels the world, blackmailing famous musicians such as Yehudi Menuhin, Isaac Stern, and Pablo Casals. Since he must be in the concert hall to inflict his damage, the narrator is forced to fly from city to city and country to country to maintain his racket, pressuring with interruptions and disasters at performances those hesitant to believe in his power. He remarks on the shameful nature of rich people not paying their debts on time, but adds “nunca he perdido tiempo en recriminaciones de orden moral” (“I’ve never lost time on moral recriminations”).

“La fe en el Tercer Mundo” (“Faith in the Third World,” date unknown) is a page-long sentence that describes a trio of priests who bring an inflatable church with them to a jungle hamlet in order to teach the ignorant savages about the grandeur of the Church. One of the natives sticks a knife into it and the structure collapses, causing chaos when the terrified people try to escape amidst the cursing of the priests. The title can be read two ways: how faith and religion take place in the Third World, but also as an instruction to have faith in the Third World, whose inhabitants can dispel and destroy the myths of the colonizers with the least of their gestures. This is real liberation theology, or, better, the experience of being liberated from theology.

The three new accounts of cronopios are snapshots of these innocent, often unlucky, travelers through the world. In “Vialidad” (“Highway Administration,” 1952) a cronopio gets into a car accident. When the police show up and question him, he is perplexed by their uniforms and can’t respond to their questions, because “entre desconocidos uno no puede entenderse” (“people who don’t know each other can’t understand each other”). Here is another brief allegory on the powerful and the powerless.

A longer piece about these enigmatic figures, though in this case based on real recollections of Cortázar, is “Un cronopio en México” (“A Cronopio in Mexico,” 1975). It begins, “Cada cual tiene sus encuentros simbólicos a lo largo de la vida” (“Each person has his or her symbolic encounters throughout life”), and the ones recounted here take place in two important regional cities of Mexico, Veracruz, and Oaxaca. The first meeting is between the illustrious author and a nine-year-old shoeshine boy who presents the paradox, or rather paradigm, of the bright child with no opportunity for school. Cortázar proves himself an insightful sociologist, probing into the implications for Latin America of the lack of education for so many youths. In Oaxaca (where he seems to find the densest congregation of cronopios in the world), this man who lived most of his artistic life in Europe has an existential moment, expressed in words and feelings right out of Neruda: “Siento más que nunca que ser latinoamericano cuenta más que ser mexicano o argentino o panameño, que nuestra sangre circula por el continente como una sola sangre” (“I feel more than ever that to be Latin American is more than being Mexican or Argentine or Panamanian, that our blood circulates through the continent like one sole blood”).

Again, Cortázar understood how the text exists in great part because of the reader (Papeles inesperados is precisely a case in point). “Acerca de Rayuela” (“About Hopscotch,” 1974) is a brief reflection on reading and generations. A decade after its original publication, Rayuela had begun to be discovered by a new generation that brought its own understanding to the novel, and in so doing “hicieron otro libro de ese libro que no les había estado conscientemente destinado” (“made a book different from that book which had not been consciously destined for them”).

The section “Circunstancias” is a shift in tone from the literary work to a more journalistic examination of the world—a part of his writing is unknown to most of his readers (though many modern Latin American writers have practiced journalism, including Gabriel García Márquez, Mario Vargas Llosa, Eduardo García Aguilar, and Elena Poniatowska). Several of these pieces concern human rights violations in the Americas, such as “Chile: otra versión del infierno” (Chile: Another Version of Hell,” 1975), a critical look at one of the most notorious violators in modern history, the Pinochet regime put in place and supported by what Cortázar so agilely terms “Nixoncide.”

The longest text in the book—twenty pages—is a travel chronicle through Cuba, “Nuevo itinerario cubano” (“New Cuban Itinerary,” 1976). Cortázar’s main point is to refute the notion that the Cuban Revolution is only Fidel Castro, or even worse a puppet of the Soviet Union. The early section headings reveal the Argentine’s romantic view of this revolutionary Eden: “Pequeña música nocturna” (“A Little Night Music”), “Alomar, o las mil y una noches del trópico” (“Alomar, or a Thousand and One Tropical Nights”), “Un arte del pueblo cuando el pueblo puede tener un arte” (“An Art of the People When the People Can Have an Art”). But the second half of the essay shifts to a sharper lens, not so much on Cuba itself but how the world saw—sees—it. The change in tone is noted as well in the titles: “De resentimientos, malas voluntades y otras formas de no querer ver” (“Of Resentments, Bad Will and Other Forms of Not Wanting to See”), “Puerquito atado a una estaca” (“Little Pig Tied to a Stake”), and “Mitin de los asmáticos” (“Meeting of the Asthmatics”).

Another “circumstance” Cortázar examines is the press coverage of world events in “Poland y El Salvador: mayúsculas y minúsculas” (“Poland and El Salvador: Capital Letters and Small Letters,” 1982), where the murder of thousands of indigenous peasants in a Central American nation supported by the United States barely gets a paragraph on an inside page of Western newspapers. After a brief but detailed contrast of coverage of events in the two countries, Cortázar fumes, “Que esta desinformación abunde en las publicaciones de la derecha, es obvio y comprensible; pero que la prensa democrática, de izquierda o simplemente liberal acepte o fije cuotas informativas aberrantes es algo que excede toda paciencia” (“That this disinformation abounds in publications on the right is obvious and understandable; but that the democratic, leftist, or simply liberal press accepts or fixes aberrant news quotas is something that goes beyond all patience”).

One of the book’s most beautiful texts, in a sentimental way, is “De una amistad” (“On a Friendship,” 1979), which recounts how Cortázar came to know the Chilean poet Pablo Neruda. These two great masters of Latin American literature carried on a dialogue where “muchas veces los silencios y las miradas llenaban el espacio mental de imágenes resplandecientes que el lenguaje sólo hubiera podido mostrar desde empañados espejos” (“often the silences and gazes filled the mental space with resplendent images that language would only have been able to show in cloudy mirrors”). That friendship lived on after Neruda’s death, and Cortázar relates how “cuando bebo, cuando amo, cuando miro algo que me parece bello o bueno . . . algún verso salta desde el trampolín de la memoria para responderme, para acompañarme” (“when I drink, when I love, when I see something that seems beautiful or good . . . some poem leaps from the springboard of memory to answer me, to accompany me”).

And there among the drawers that Aurora Bernárdez happened to look through one Parisian winter evening, when she discovered all the texts that would become Papeles inesperados, were a few scattered poems. Cortázar spent more than the last three decades of his life living outside Argentina, a citizen of his own world inhabited by cronopios like himself. “La patria” (“Homeland”), with its unknown date, speaks of that place we always want but can never have:

While the novels of magical realism seem almost a quaint regionalism now, Cortázar stands out as a forerunner of postmodern literature. When Papeles inesperados is translated into English, a whole new generation of readers here and around the world will find that for themselves.

(All translations from the Spanish by Jay Miskowiec.)