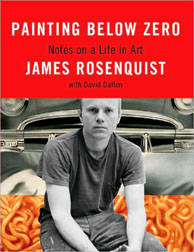 In his autobiography, Painting Below Zero, American artist James Rosenquist offers a darting account of his life, weaving together the personal with the professional from infancy forward with enough detail and texture to satisfy the curious. Rosenquist’s transient musings of the past are often as prescient of his work to come as his current-day reflections are revelatory about work already made. The sometimes messy overlap of the two constructs an informative context on how and why he emerged as one of the most influential painters of post-World War II contemporary American art.

Rosenquist writes of 20th-century American art as “sleepwalking through the nineteenth century” before 1950s Abstract Expressionist artists such as Jackson Pollock, Franz Klein, and Willem de Kooning took command, lionizing New York City as the center of the art world. “It was a very vigorous and heroic style—you made epic canvases by splashing your psyche on the canvas,” Rosenquist writes. “I loved the Abstract Expressionists. . . . but I never wanted to look as if I were copying someone else’s style. I wanted to do something new.” For the uninitiated in post-World War II art, an often-obtuse trajectory, Rosenquist is labeled a Pop Artist, with critics and art historians neatly categorizing him in the same breath with other New York artists Andy Warhol, Roy Lichtenstein, Jasper Johns, and Robert Rauschenberg, among others. Rosenquist takes great pains to distinguish his artistic practice from the others’ with convincing results, and he establishes how all of these artists were a new breed, percolating the 1960s Pop Art stew. The work of the Pop Artists through various styles and methods was simply a reaction, usually through the use of popular imagery, to the prevailing Abstract Expressionism.

For any reader living in the Midwest, and particularly North Dakota and Minnesota, the book has a particular seduction. Born into a family of modest means in 1933 in Grand Forks, North Dakota, Rosenquist’s psyche was imprinted early on with the scale and intrinsic power of vast, open spaces. “The Midwest is a strange place. On the one hand it is very basic, down-to-earth; on the other it’s a great generator of illusions . . . the land is totally flat, like a screen on which you can project whatever you imagine.” It is hard not to make the visual and psychological leap from the flat, expansive Midwest to Rosenquist’s powerful 1964 breakout painting, F-111, which stunned admirers and critics alike with its 10 x 88 foot size.

Although the Rosenquists were poor, one might today describe them as cool. Both parents were pioneering pilots who flew Travelaires and Monocoupes, and were developing an international mail route from North Dakota to Winnipeg when the Depression hit. “A dollar was as rare as frog hair,” Rosenquist writes. When he was seven years old his parents moved to Atwater, Minnesota, where his paternal grandparents farmed 500 acres and his father ran a motel and gas station along the highway. Two years later, the Rosenquists moved to Minneapolis and lived next to the Minneapolis Institute of Arts. His mother, an amateur painter, encouraged museum visits and young James’s interest in art. His father was servicing B-42 bombers for Northwest Airlines and was later transferred to Vandalia, Ohio, where he worked at Wright-Patterson Airport; James’s mother took James to the nearby Dayton Museum of Art, where he gained an understanding of collage. Intermittently, he was sent back to live and work on the family farms in Minnesota and North Dakota. Paper was in short supply, so he drew on the back of long rolls of wallpaper his mother gave him—precursors to the huge billboards he would later paint. Back in Minneapolis, at age fourteen, he received a scholarship at the Minneapolis School of Art to study art on Saturdays. With the family always in need of money, he always had a job—selling ice cream, driving a delivery truck, or working on the farms in summer.

In 1952, Rosenquist graduated from Minneapolis’s Roosevelt High School and wanted to move to California, but his mother insisted he attend the University of Minnesota, which he found easier than high school. The famed Minnesota painter and teacher, Cameron Booth, became his mentor. He took a job as a sign painter to support himself and graduated in 1954 with an associate degree. The next year was spent traveling and painting signs. With Booth’s encouragement, he won a scholarship to the Arts Student League and flew to New York City in September 1955; he never looked back. His talent for scaling scaffolding and figuring out how to paint gigantic surfaces got him jobs where he eked out a living painting signs from Times Square to Brooklyn. The book’s black and white photographs are ample proof of his labors and talent—including one of Rosenquist and his mother poised in front of a 1954 Coca Cola billboard in Minneapolis. Leading a double life like most young artists, Rosenquist was also making his own work in the late 1950s, abstract paintings and collages. In 1959, at age twenty-six, he quit sign painting all together.

Painting Below Zero also offers a wealth of information on the New York art scene from 1960 forward. The book’s cast of characters includes the aforementioned artists and many others; his dealers Dick Bellamy, Leo Castelli, and Ileana Sonnabend also figure prominently, as do collectors such as Robert and Ethel Scull and actor Liv Ullman. Parties in Warhol and Rauschenberg’s studios are well noted, as is the famed Cedar Bar. Photographs, such as one of Rosenquist with model Jean Shrimpton leaning against Warhol’s Thirteen Most Wanted Men in the latter’s studio (which was rejected for the 1964 New York World’s Fair), gives the book a gritty caché. Rosenquist also documents his life in lower Manhattan’s walk-up studios, his marriage to his first wife and their son, and the tragic, 1971 automobile crash in Florida which wreaked havoc on their lives as a family and sent the artist into deep doldrums in the 1970s.

Following Rauschenberg’s lead of escaping New York for Captiva, Florida, Rosenquist bought land in the swampy outskirts of the backwater Gulf town of Aripeka, where he would be just another guy in a t-shirt and jeans walking through town. He underscores the importance of his laidback compound of studio, office, and home on stilts as a needed counterpoint to New York in the fast lane. His recollections of protesting the Vietnam War, appearing before Congress to stand up for artist’s rights, and the astonishing prices for his paintings at contemporary auctions are all part of the mix. He recounts how in 1965 F-111sold for $45,000, of which he received half, and in 1986 the Sculls sold it at Sotheby’s November Contemporary Auction for $2,090,000. In the same year he also had a cameo in the famous film about greed, Wall Street, with Michael Douglas.

There is also the touching account of his meeting and marrying his second wife, Mimi Thompson, in the mid-1980s, and the birth of their daughter, Lily, in 1989. Rosenquist’s writing turns poignant when he muses over the 2008 death of his close friend Rauschenberg, and the horrific leveling by fire of his Aripeka home and studio in April 2009, where he lost everything, including finished paintings, his entire print archive, and his car collection. One reads the weariness in the 77-year-old artist’s voice following the conflagration.

Tying all of these tales together is Rosenquist’s insistent description of painting after painting— including the whys and the wherefores of each, and how he used fragments of “giant images to foil the picture plane.” The title of the book, Painting Below Zero, comes from his drive to leave abstraction, which he considered painting about “nothing.” He writes, “maybe by using imagery from my billboard days I could go below zero, because I chose images not for their content but for their form and color. . . . I thought maybe I could make an aesthetic numbness out of these images, a numb painting where you don’t really care about images—they’re only there to develop space.” Viewers who did not clearly understand Rosenquist’s motivations and intent previously surely will now; descriptions such as this one comparing work from the 1960s to a 1998 painting, The Swimmer in the Econo-mist #3, nicely display Rosenquist’s thinking: “While many of my earlier paintings were intentionally flat, here I injected a roiling propulsive energy into the painting, a new kind of pictorial velocity. It’s a totally optical space.”

While Rosenquist was aided by biographer David Dalton in composing this book, Painting Below Zero is unquestionably in the artist’s words. The book could have used a more thorough edit, as some information is contradictory with regard to dates, and at times the text borders on repetitive. Similarly, while the book is privileged with many photographs and excellent color reproductions, including a foldout of F-111, a glossary of images at the back of the book with thumbnail shots would have been useful. And although the book’s subject is art and life, Rosenquist’s words do not always adhere easily to the page. Still, the artist’s blocky, at times almost clumsy delivery of his story will charm any reader. Pedestrian descriptions of significant aesthetic matters intersect with moments of clarity and insight that slowly gather the reader into the artist’s orbit, revealing his intentions, desires, philosophy, and sheer drive to succeed in a world that early on did him few favors. The syncopation of Rosenquist’s words and their unflowery directness bring the reader up close and personal to a man who is now considered one of the towering figures of 20th century art and who continues to thrive in the new millennium.