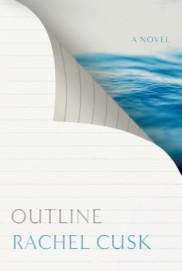 It may come as no surprise, given the title, that Rachel Cusk’s latest novel appears as neatly structured as a term paper. The eponymous word appears exactly twice in the book—once at the beginning, once at the end—and between these slender bookends stand ten tidy chapters, each one devoted to a nearly anonymous female narrator’s conversations with a series of loquacious interlocutors, mostly male strangers during a trip to Athens, Greece.

Cusk, who along with such contemporaries as Ben Lerner and Karl Ove Knausgaard has trumpeted the primacy of autobiography over fiction, shares a number of similarities with the novel’s narrator. Both are British writers and writing teachers; both are mothers and divorcees. Yet Faye, who is called by name only once, is not so much a character but an embodiment of a distinctly feminine wound. Like an amphora in ancient Greek pottery, Faye’s throat opens not to speak but to accommodate the enormous volume of her companions’ personal histories. In response to this narrative imposition, Faye cannot or will not define herself, and instead allows these other selves to flow into her like water. “You might feel,” she tells a female dinner companion in the wake of several such encounters, “as though there were some separate, autonomous self within you, but perhaps that self didn’t actually exist.”

In Cusk’s universe, womanhood is negative space, the blurry leftovers after men stake their territory. This manifests in chapter-long dialogues that function as monologues, and the imbalance vacillates between humorous and obscene. When Faye’s neighbor on the flight to Athens bothers to ask a question, she feels the “conscious effort” of the inquiry; a fellow writer, after unburdening himself for hours at a cafe, asks: “What about yourself . . .working on something?” only as she is packing her bag to leave. These moments are relayed pitch-perfectly, without an ounce of shrillness, as if Cusk anticipated and thereby disarmed accusations of same-old feminist rage. The writer, married, does not ogle or sexually harass their waitress, but rather “watch[es] the waitress moving in and out of the shadows” after declaring, “Oh, run away with me.” To inhabit a female body is to be exposed and negated simultaneously.

Indeed, while Faye’s male companions act (at one point her neighbor lumberingly attempts seduction), the women react, bewildered, recursively masticating on male misdeeds without the ability to digest them. In the book’s final chapter we meet Anna, a British playwright who has lost her facility with language following a brutal mugging, and through her halting narrative the book’s title finally clicks into focus. By listening to her male neighbor speak voluminously during her flight to Athens (note the parallel design), Anna “found in her own nature a corresponding negative . . .began to see herself as a shape, an outline, with all detail filled in around it while the shape itself remained blank.” Since the mugging, Anna has been able only to language experience via summary. Why write a play about jealousy, she wonders, if it can be encapsulated in the word itself? When she finally describes the attack, she puts her hands to her throat and chokes a one-sentence “squawk” almost inhuman in its release.

This traumatic moment stands in unsettling contrast to the pages and pages of voluble monologues by men whose access to narrative offers proof of triumph over the intensity of their experiences. What’s a woman to do, the novel seems to ask, if she—for reasons internal and external—cannot language her experience? Or if, when she does, it is summarily dismissed?

The answer, Cusk suggests, is for women to scrape themselves empty—of language, of feeling, of desire. Faye cannot bridge the dark chasm that exists between what she wants and what she is offered, so she decides “to want nothing at all.” In the face of male excess, power lies in asceticism; in the face of male chatter, silence. Silence may prevent knowability, but knowability is exposure. And exposure, for women, leads only to abandonment. The “need to possess” Faye wholly proves, over and over, to be the desire to “use her temporarily.” On the one hand, silence isolates; on the other hand, it at least “put people out of one another’s reach.”

It’s a troubling conclusion, ill-fitting in a culture armed with a marriage industrial complex, but Cusk makes a strong enough case that even the most optimistic romantics will be left uneasy. Life does not favor the living, Cusk reminds us. Better to dry out as ancient pottery, petrify oneself as old wood. Only then can one avoid the ravages of experience. “Yet if people were silent about the things that happened to them,” Anna wonders, “was something not being betrayed?” The novel itself acts as the object lesson to this question. With Outline, Cusk has shorn fragments against ruin and created something whole, devastating, and imminently worth reading.