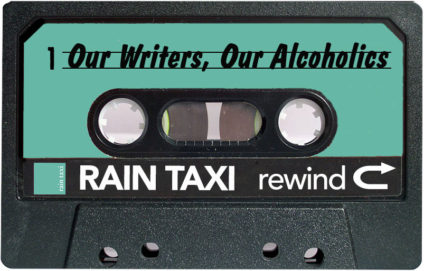 In nearly every context, being an alcoholic is considered a bad thing. This is not news. But when it comes to creative fields, especially writing, the term often starts to gather connotations that are far less negative; we can still look at it as “bad,” but there’s no question that we romanticize the alcoholic writer. In fact, with certain authors, their drinking problems become part of their lore, an essential part of what makes them the creative geniuses we believe them to be. And even on a more anonymous level: what amateur writer hasn’t tried sitting at the computer late at night with a stiff drink, hoping to channel the bravado of a Kerouac, Hemingway, or Dorothy Parker? (I know I’ve tried that experiment. Suffice to say I did not immediately begin producing my magnum opus.)

The link between alcohol and writing gets twisted and flipped around in this way. Your favorite author probably didn’t drink because he thought it made him a better writer. He or she probably drank to self-medicate, to cope with the same internal struggle or discontent that ended on display through their literary work. So maybe there is a link: writing, like drinking, can often serve as the coping mechanism, though it’s quite clear they exist on opposite sides of that coin. We like our alcoholic writers because, whether we admit or not, we often like to see authentic struggle from people who write about it. So yes, alcohol and writing will forever be linked. Just don’t expect to use one to make you better at the other . . . Trust me.

Review by Matthew Schneeman of What Did I Do Last Night? by Tom Sykes (Winter Online 2006/2007)