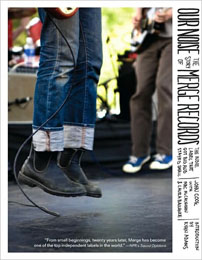 Our antennae were tuned very specifically for like minds, as opposed to sending out a signal to convert people. There are some kinds of art that are trying to find their peers, and there are other kinds that are trying to make peers.      —Jenny Toomey

During the last twenty years, Merge Records has amassed an astonishing discography of over 350 releases and counting, a list that reflects the Chapel Hill-based label’s penchant for the arcane, the quixotic, and the awesome. Since its inception as a pet project oft subsidized by the group Superchunk, Merge has promoted its artists with a business ethic that runs counter to market and major label forces. As many indie-turned-major bands were snatched up and dropped by the big companies in the 1990s, Merge emerged as a true alternative to the majors, as well as a less top-down alternative to bigger indies like Sub Pop, Matador, and Nonesuch. The “indie label that got big and stayed small” has always maintained a staunch belief in artistic freedom, as well as an understanding of the term “indie” that embraces the eclectic and unpredictable weirdness involved in capturing sound. Now the label has garnered acclaim for having released big-selling bands like Arcade Fire and Spoon. It also has given us some of the heartbreakingly best unheard music ever made: Polvo, The Magnetic Fields, Neutral Milk Hotel, Lambchop, and M. Ward, to name but a few.

We might be tempted to take such a diverse array of musicians for granted, if only because Merge continues to ensure their recordings exist. But if Merge didn’t exist—as many indie labels started with the same verve do not—neither might these baroque marvels of musical mayhem. What would our world be like without the Fields’s 69 Love Songs or Neutral Milk Hotel’s In the Aeroplane Over the Sea? One shudders to think.

John Cook’s moving oral history of Merge Records, Our Noise, co-written with founders and Superchunk members Mac McCaughan and Laura Ballance, resonates with other loving treatments of independent bands, including The Replacements: All Over But the Shouting (2007) and Perfect Sound Forever: The Story of Pavement (2004), as well as documentary films about X (The Unheard Music, 1986), Guided by Voices (Watch Me Jumpstart, 1998), Fugazi (Instrument, 2001), and Daniel Johnston (The Devil and Daniel Johnston, 2004). However, Our Noise stands alone in its depiction of an independent label and the sonic intricacies of the underground music scene represented by that label. Cook’s writing both informs and delights, and his descriptions of bands are always on the mark. See, for example, his brief on Polvo: “a disheveled and detuned glorious mess that reveled in unusual time signatures, unconventional song structures, and Eastern tonal scales. They were hailed as leaders in the math rock movement, but played with an orchestrated imprecision that implied access to some sort of alien logic system.” Each chapter focuses on a particular band and time period, and includes fantastic photos and fliers, plenty of eye candy memorabilia, and insightful commentary from the people who were there.

As a whole, Our Noise details the evolution and devolution of the American music scene since the late 1980s with all the passion and intensity of the great bands on Merge Records, serving as a complex cautionary tale about the dangers of signing to the majors. Many bands have turned to major labels only to find themselves devastated by the experience. In this relation, the pursuit of profit seems vigilantly irreconcilable with the creation of beauty. As Julian Koster of Neutral Milk Hotel suggests more poetically, “we were conscious of the fact that a lot of people who had made really wonderful things stopped making wonderful things, and that it seemed to have something to do with their interacting with the real world.”

In a society increasingly predicated on consumerism and conformity, the continuing vitality of Merge Records after two decades is simply incredible. As so many independent labels, bookstores, and news sources are forced to scale back or make way for the bottom line, Merge’s milestone deserves as much celebration and hoopla as the twenty-year anniversary of the fall of the Berlin Wall. So turn up the music, and tune in to the magic that is Our Noise.