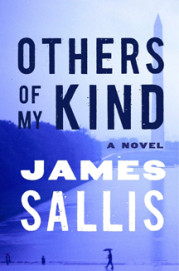 The newest novel by noir master James Sallis begins with the straightforward propulsion of a typical crime drama. But in the opening of this slim book, we learn in disturbing and exhilarating detail the protagonist’s atypical backstory: Jenny was abducted before she hit double digits and was kept in a box beneath her captor Danny’s bed for years. She escaped, surviving as a feral resident of a shopping mall before getting picked up by the foster system and shuffled through various homes.

Adulthood, for Jenny, comprises a freedom few of her peers could understand. “I wanted desperately, after all those years of absolute dependence, to be on my own. I could almost taste it, like that drop of sweet dew you pull out of honeysuckle, like the metallic taste of Danny’s genitals.” Despite her tumultuous origin, Jenny is a well-adjusted and perspicacious narrator. When she’s cross-examined by a social worker, it’s the bureaucrat made out to be the fascinating character study:

“Adults are supposed to care for children, not take advantage of them.”
“Danny did take care of me. He brought me sundaes. He fed me, he cleaned my box. Took me out when he came home.”
Tears replaced the concern brimming in [the social worker’s] eyes. I had the feeling that habitually they waited back there a long time; and that when they came, they pushed themselves out against her will.

Yet despite the narrator’s clarity of insight, Others of My Kind struggles to keep its elements in line. A child shuttled through the foster system is ample basis for a novel, let alone a young girl who was imprisoned in a box beneath her rapist’s bed, or an adolescent young woman coming of age in a shopping mall while hiding from security guards during business hours. Sallis only glances over this rich terrain, nudging the book instead down the disheveled path of Jenny’s adult life, taking on themes without apparent discrimination.

After a sixty-page muddle of chronology, the scope of the plot has long overshot practical narrative boundaries. In addition to Jenny’s life story, Sallis crams in a portrait of the foster care system, a critique of the 24-hour news cycle, and high-stakes elements like presidential kidnappings and terrorist attacks. Over the course of a mere 120 pages, these elements are a bit more than most readers will be able to chew.

Taken in small doses, though, Sallis’s skill with a sentence renders the book an exceptionally pleasurable read. For instance:

What difference could finding my parents possibly make? I’d always made light of adoptees who, coming to adulthood, insisted upon doing so. So many years have passed. Whatever congruencies and connections once may have obtained are long gone. One might as well seek out Cro-Magnon ancestors.

Jenny ultimately does track down her birth parents—one more narrative layer to an ultra-compressed work—and when she does, Sallis wields a mighty insight into the workings of the world. Quite an accomplishment, considering how little the world he describes has in common with our own.