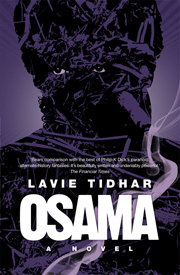 Winner of the 2012 World Fantasy Award, Osama is a mix of crime fiction, pulp noir, science fiction, and history. With Osama, Lavie Tidhar has created a dreamy, disturbing mish-mash of genres and tones. The book has many beginnings and layers, some of which move the reader sideways, slipping a little farther each time into disturbingly familiar places that may or may not exist.

One of the book’s beginnings is a section set in a jagged Courier font that describes in a matter-of-fact tone a terrorist bombing in Nairobi. This section turns out to be an excerpt from a pulp paperback that Joe is reading on a slow afternoon, another novel in theOsama Bin-Laden: Vigilante series. Joe is a private detective who not only has the gun, bottle of bourbon, and dirty office of a classic noir PI, but he also chain-smokes and drinks endless cups of coffee. When a mysterious, beautiful woman walks into his office and gives him a ludicrous-sounding assignment—find Mike Longshott, author of the Osama series Joe is reading—Joe accepts the assignment, and his travels take him further, deeper, and wider than he could have expected.

His point-of-view drives most of the rest of the book, but despite Joe’s origins in pulp stereotypes, he is not a predictable or even reliable narrator:

A long time ago Joe had learned that it was sometimes easiest to feel alone amongst people. He no longer let it disturb him, but as he sat there, isolated from the outside by the transparent glass windows, he felt for a moment disconnected from time, all contact between him and the rest of humanity removed, cauterized, his connection to the people outside no more than an amputee’s ghost-limb, still aching though it was no longer there.

Tidhar uses such reveries at the beginning of Joe’s journey, contrasting sharply with the choppy, disconnected text that informs Joe’s actions later on and building to an increased urgency even in relaxed situations, as when Joe watches the audience in a London lounge:

. . . there was something about them that didn’t read right. Bars of shadows fell on raised, expectant faces. The sense of a lingering wait, the eyes that stare into a fartherness. Clothes that did not quite fit. The thought of a tree felled, the roots torn out of the ground—helpless in the air. Expectant people—they looked like they did not belong, not here, not anywhere.

Other contrasts in tone include the Courier-font excerpts from the Osama pulp novels and frequent pop-culture references. The Osama excerpts are clinical reports of actual bombings or terrorist incidents, not at all close to the overblown bombast one expects from adventure novels; the pop-culture references span from Casablanca to The Wizard of Oz to a relatively obscure children’s novel, Astrid Lindgren’s Brothers Lionheart. The cultural references act on the reader to create an unsettling queasiness, though Joe himself seems unaware; the references are left to hang in mid-air with no closure, leaving the reader to wonder which world is real, ours or Joe’s?

As such, Osama is an engrossing study in urgency and malleable levels of reality. The reader becomes a co-conspirator in Joe’s investigation, which leads through a hazy mystery punctuated by terrorist reports and pop-culture jokes. Each section of Joe’s journey builds on what has passed before; the search for Mike Longshott, the mystery behind the men in black who pursue Joe, the disappearing woman, and finally and most importantly, who is Joe? Who is Osama?

In a foreword (another of the multiple beginnings), Tidhar says that the inspiration for the book came from a series of personal near misses with terrorist attacks (the 1998 Dar-es-Salaam American embassy bombings, the terrorist attacks in Gaza in 2004 and in London in 2005). But the most meaningful of those multiple beginnings may be: “The following is a work of fiction.” It works as an ending as well; after finishing the shifting realities of Osama, the reader craves that reassurance even if there is a lingering doubt that it may not be true.