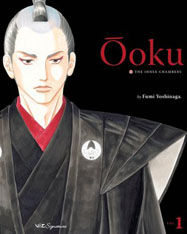 Like many manga, Fumi Yoshinaga’s Ōoku: The Inner Chambers is a bit hard to get into at first. The series begins with an intriguing premise: the population of Tokugawa-era Japan (1600-1700s) has been beset by a terrible disease which has killed most of the male population; consequently, women have taken over all of the traditionally male roles. To lead the reader into the story, Yoshinaga presents a handsome young nobleman named Yunoshin Mizuno. Sons are a rare commodity in this fictional Japan, often gaining great wealth for their families through advantageous marriages to powerful women.

Rather than submit to marrying someone other than the poor shopkeeper’s daughter he truly loves, Yunoshin volunteers to win his family a steady retainer by entering into service in theōoku, the “inner chambers” of the Shogun (military ruler)—effectively a very large male harem. As the current Shogun is a child, Yunoshin believes he has found a way to remain true to his love while satisfying the needs of his family. What follows is a crash course in the power struggles, political machinations, and subtle intrigue that goes on within the walls of the ōoku.

Fortunately, just as the reader may be about to give up hope for any kind of depth from the story, the child Shogun dies and Yoshimune Tokugawa takes her place, and the peculiarities of the characters’ diction (they’ve all been speaking in Shakespearean English) fade to the background. Canny and self-assured, Yoshimune turns the palace on its head, and in so doing, the true intricacies of Ōoku’s plot are revealed—or rather, cleverly hinted at, as the series has many more volumes in which to reveal its full hand. The author very smoothly concludes Yunoshin’s arc, and continues her story with Yoshimune’s inquiring mind at the center. Side characters are brought forward as more major characters appear, and the plot thickens with questions of power, gender, and truth.

It must also be said that the growing sophistication of Yoshinaga’s storyline is equally matched by her skill with a pen. The illustrations in Ōoku are beautiful, with masterful attention to detail. Fabric, dress, and room designs are mostly historically accurate, which well-wrought endnotes help to explain. The interactions between panels add extra layers of humor, interpersonal interaction, and understated context for the observant reader.

You don’t have to be a fan of manga or have a lot of knowledge of Japanese culture to appreciate Ōoku; all you need is to be interested in historical drama with a twist. It’s a good gateway book, too, so if you haven’t yet tried any manga, here’s a great place to start. And fortunately, it really is just the beginning. There are currently seven volumes of Ōoku available in the U.S., with more to come. If they all live up to the promise of the first, it should be quite the enthralling epic.