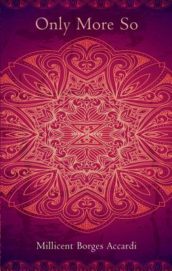 Millicent Borges Accardi’s recent collection of poems, Only More So, navigates a strangely familiar territory through a chorus of forgotten and persistent voices. In this challenging and rewarding book, the poet births grotesque monsters to awaken her audience, and then coaxes them to sleep with remnants of a song.

Accardi’s characters and unheard prayers radiate through the poems’ haunting glimmers of imagery concerning topics such as World War II, immigration, and the sexual objectification of women—all presented through language that hovers with the intimacy of ghosts. As the title poem chants, “Why do trees mean? and / What does water stand for?” Through this contemplation of signifiers, Accardi unravels any semblance of understanding the contemporary world. As readers attempt to parse her sentences, she swirls them on “the proud canvases of flat language paper / that once told her everything she needed / to know. // It was like this, only more so.”

And so, Accardi begs the question that is central to the notion of metaphor—there is something to unpack beneath the words. Her biting conclusions eat away at our sad dependence upon denotation, and then she turns down the temperature: “more understandable than her or me or any / pronoun she whispers out between no and help, / she shuts her eyes, imagining cold weather.” The women in these glimpses are traversing ghosts who must navigate the historical past, and the ghostly world they inhabit is cold as ice.

Additionally, Accardi makes the sphere of her world even more mysterious by breaking down physical laws and imbuing these nameless objects with magic. “The sharp wool collars / of the soldiers pointed south; inside, / the crudely made benches evaporated into firewood.” There is an oxymoronic tension in wool that is hard and benches evaporating, a strange reversal that gives rise to an eerie chorus of voices. Accardi conflates all of these hovering characters into one large mono-character with the use of the pronoun “they.” From a schizophrenic woman who thinks her oldest child is God to those who name their adopted cats after favorite writers, “They like Miles / Davis and not just because an ex-husband did.” And again, the words are cast as forlorn empty shells removed from a direct line of communication: “the syllables curl into insignificant / worlds.” Through this breakdown of pronouns and the materiality of the world around us, Accardi beckons the reader to connect the dots. In places, she leaves a thought unfinished, querying the reader to ask just what it is they are seeking: “while the mother stirs / on her axis, while there is a promise for- / While there is still—” As such she leaves an audience grappling with a lack of conclusion that points directly into the empty space waiting on the cold, snowy expanse of the next page.

Within this silent territory of negative space, Accardi’s amassed “they” characters wait and listen through winter weather, always hoping for music. The poems dial back and forth between slower and faster rhythms, as though this army of lost women is turning the radio dial, questing through the static, searching for memories buried beneath the snow. In “Amazing Grace,” an elusive “I” shops for Halloween candy and school clothes with her dead mother, and Accardi weaves a trance through the lexical ambiguity of her pronouns: “It fit me perfectly, and I just knew it would / have lasted me her lifetime.” Ultimately, this erasure of labels and distinctions leaves everyone floating along with the “slow slippage / Of time back into the sea.” A young woman is simultaneously wife and grandmother. Dentures and gray hairs haunt the living. Whole skylines flutter in the tub, expanding and evaporating towards nothingness.

This collection celebrates communication through poetry in a contemporary landscape, even though at its core it is about a breakdown in communication. It is like a hope for the past, a memory of the future, a waking nightmare as beautiful and horrifying as the female body. Only more so.