Taking the Consequences: An Interview with Karin Tidbeck
Interviewed by Matt Bell
Matt Bell talks with Swedish author Karin Tidbeck about weirdness, time, and her new collection of short stories.

World War Z: An Oral History of the Zombie War
Max Brooks
& Scatter, Adapt, and Remember: How Humans Will Survive a Mass Extinction
Annalee Newitz
Essay by Randon Billings Noble
Two books—one fiction, one non—offer differing theories on human survival past an apocalyptic event. Which one do you subscribe to? 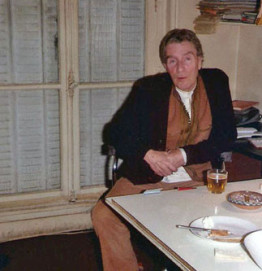 Talking with the Man Who Let the Mice In: Two Visits with Brion Gysin
Essay by Gregory Stephenson
Gregory Stephenson paints a stirring portrait of his meetings with poet, novelist, painter, and inventor Brion Gysin in the early ’80s. You can download a free PDF of this piece if you'd like to read it in e-book form, or you can view the file on your desktop.

On Reading Obituaries
Essay by Louis Phillips
A brief essay on the joys of reading obituaries—especially if you have the opportunity to read your own.

The Black Sea
Stephanos Papadopoulos
By turns tender, vicious, victorious, and mournful, Papadopoulos uses the sonnet form to make vivid a part of Greece that few of us have seen. Reviewed by Eleanor Goodman

But a Storm is Blowing from Paradise
Lillian-Yvonne Bertram
Bertram’s new collection locates the human in a large context, vacillating between the cosmic and common. Reviewed by William Langford

Collected Poems
Joseph Ceravolo
The life work of this talented New York School poet was hard to find until now, with this much-needed and deserving collection. Reviewed by Patrick James Dunagan

The Collected Poems
Marcel Proust
The release of this omnibus of Proust’s poetry will delight his fans, although entry into the Proustian world should still be through his novels. Reviewed by David Wiley

The Ecopoetry Anthology
Edited by Ann Fisher-Wirth and Laura-Gray Street
As this bold, irreverent gathering of poems attests, the ecological damage we humans are causing reaches even beyond the earth. Reviewed by Eliza Murphy

Kindergarde: Avant-garde Poems, Plays, Stories and Songs for Children
Edited by Dana Teen Lomax
With over eighty contributors, ranging from seven-year-olds to writers no longer with us, this collection of playful works certainly earns the “most fun anthology to read” award. Reviewed by Megan Burns

The Collected Works of Noah Cicero Vol. I
Noah Cicero
This collection assembles eight of Noah Cicero’s earliest works as parables for the American nightmare, vomiting out truths that bask in bawdy flashes of lust. Reviewed by Peter Tieryas Liu

Taipei
Tao Lin
Tao Lin’s writing accesses the human experience with a stripped-down prose, free of pretense, and with an existentialist twist. Reviewed by William Stobb

The Eyes: A Novella & Stories
Michael Harris Cohen
Cohen’s prose is high-octane, a fitting vehicle for the mangled characters about to drive straight into a wall of their own violent creation. Reviewed by Peter Grandbois

In the House Upon the Dirt Between the Lake and the Woods
Matt Bell
Bell's debut novel takes place in the liminal space between fairy tale and creation story as a newlywed couple explores and shapes their new surroundings. Reviewed by Hugh Sheehy

Vs. Death Noises
Marcus Pactor
In his debut collection, Pactor builds ingenious narrative devices that tell stories of loss and grief while describing something else entirely. Reviewed by John Pistelli

The End of San Francisco
Mattilda Bernstein Sycamore
Sycamore lets the reader feel the “push-pull of intimacy” that makes the process of excavating memories so painful but so cathartic. Reviewed by Mariana Roa Oliva

Nâzım Hikmet: The Life and Times of Turkey’s World Poet
Mutlu Konuk Blasing
Nâzim Hikmet is a 20th-century literary giant; this new biography by his acclaimed translator fills in the background of his essential work. Reviewed by Mark Gustafson

In the City of Bikes: The Story of the Amsterdam Cyclist
Pete Jordan
Open this book, hop on a bike, and explore the streets of Amsterdam. Reviewed by Emily Loberg

Native American Classics
Edited by Tom Pomplun
If there is a theme linking the most ambitious narratives in this wonderful collection, it’s the representation of the natural world as a kind of supernatural democracy. Reviewed by Dave Wagner and Paul Buhle