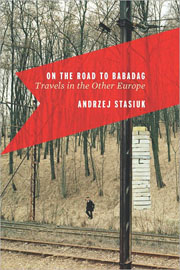 Small countries should be allowed to cut history class. They should be like islands off to the side of the main current of progress.

Driving out of Poland, Andrzej Stasiuk is again ready to explore the remote and often mysterious villages of Eastern Europe. He’s covered this lesson plan before, inFado (Dalkey Archive, 2009), where his quiet travels took the long way around to places that maps ignore. In On the Road to Babadag, he continues to explore “the other Europe” to discover what makes people there survive despite being forgotten or ignored by the rest of the continent. His pace is slow and observant, with a writing style that mimics the region: spare, straightforward, and honest.

There are countless ways to write a travelogue, and the writers of such usually proclaim a love for the places they visit. At times, however, the travel story becomes their story, more about their reactions to a place than the location itself. Only Stasiuk, along with Tony Fabijancic (writing about Croatia and Bosnia), seems to recognize that the stories belong to the inhabitants and aren’t there to be manipulated by outsiders and processed into anecdotes.

Stasiuk writes from observation: he rises early and quietly finds a cup of coffee and watches people go about their lives. He misses nothing: the gait of the already-tired worker, the way the shops put on their faces as the day begins, even how a tired man drinks his liquor. He doesn’t judge the people he observes, or imagine what could have been different politically. No matter where he ends up, he seems to pinpoint a simplicity and contentment uncommon to Western lands:

At that same hour, in that same dying light, cattle were coming home . . . Scenery and architecture may change, and the breed, and the curve of horn or the color of mane, but the picture remains untouched: between two rows of houses moved a herd of sated cattle . . . The “worst and smallest” nations live with their animals, and would like to be saved with them. They would like to be respected with their livestock, because they have little else.

What comes from this work is an appreciation for the small and simple but ultimately noble deeds of strangers. When he inquires of an elderly man about a certain train’s departure, he finds, hours later, that the man followed to make sure he got on the right one. In another city, a street kid advised him to avoid his intended hotel, suggesting another. Stasiuk doesn’t fall for it, thinking it a setup; it turns out his original choice was uninhabitable and the one the boy recommended was preferable, being clean and safe. This same boy helps him change his money, get a packed meal, and make the train on time without taking a dime for his efforts. Finally, he tells of an old woman on a lonely country road who has little to her name but finds a sense of purpose by scrubbing down the street anytime a car passes.

Stasiuk is the ultimate road trip companion; he’s thorough in his knowledge about the region’s people and culture, but he also knows when to keep quiet and just admire the view. The historical context is always present, as it has to be in this part of the world. Many Westerners assume that Eastern European history is just war and genocide, with a bit of Count Dracula thrown in. Ignoring the stereotypes, Stasiuk notes philosophers and poets inspired by the variance of light that appears in these hills and valleys. At one point, he sidetracks to find the grave of Emil Cioran, a Romanian poet and author who was a contemporary of Eliade, Sebastian, and Ionescu in the 1930s and for whom preserving the Romanian identity was vital.

All is not bucolic though; Stasiuk also investigates the culture clash in Chisinau, where the availability of Western goods intersects the most humble of farmer’s markets. It’s not so much the disparity but how he describes it that makes it instantly recognizable: “a Romanian-Slavic mix of loveliness and risqué makeup: peasant modesty in dance-hall gear. The general impression that everyone is playing at being something other, each according to a private notion of a world not here.” His description corresponds perfectly to how modernization in the larger cities is awkwardly positioned between Western influences and old-world traditions.