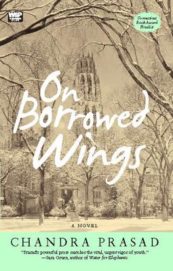 Some say a novel begins with the question “what if?” Chandra Prasad has a simple proposition for the creation of her 2007 novel On Borrowed Wings: What if the first woman to attend Yale University did so in the mid-1930s instead of decades later?

Prasad’s novel has four sections: summer, autumn, winter, and spring. The main character, Adele, has a brother, Charles, who has been accepted at Yale and will enter the freshman class that fall. He dies that summer, however, and Adele—who is just as smart as her brother (if not smarter)—decides to go in his place disguised as Charles.

That’s the what if; what follows is ingenious and speaks clearly to issues current on today’s campuses as well as those of mid-30s university life. On Borrowed Wings is not a farce, but a serious look at issues of race, gender, and class by way of the cross-dressing Adele.

Adele, after all, lives on campus in a dorm. She has to take gym class. She obtains a work-study position with a bigoted professor. How she negotiates these challenges makes for entertaining and thought-provoking reading. Near the beginning of her matriculation as she looks at Old Campus, Adele’s “eyes wandered to single elements: an ancient iron gate, ivy vines twisted about its rusty crooks and spokes; a resplendent panel of stained glass, its colors wistful in the waning light. As dusk descended, the buildings of the university were almost too wondrous to take in.” During the course of her first year, however, her idealized view of Yale will change.

Her relationship with Professor Spang in the Department of Social Demography and Intelligence (a fancy name for eugenics) especially disheartens, then enrages, and finally inspires Adele to action. Spang studies immigrants, or as he puts it when he first meets Adele/Charles to explain his project: “What this study will address—the meek and diseased, the criminal class . . . They’re immigrants mostly, though not all. They’ve come here because they know they won’t have to do anything for themselves. They’re leeches.”

Spang is not a sympathetic character. Little does he know that Charles is actually Adele and that Charles/Adele comes from a working-class family—for Spang, one of those families of “leeches.” Adele triumphs over Spang, however: She gets the last word and the best word, and in doing so she aids a New Haven immigrant family.

Adele/Charles has other difficulties during this first year, this imagined what if year, but overall she triumphs. President Angell of Yale—the name of Yale’s actual president in the ’30s—calls “Charles” into his office near the end of the book to say, “’In only your first year . . . you’ve shown purposefulness, creative vision, and civic responsibility.’” She/he will return the next fall.

Prasad herself graduated from Yale, but the novel goes far beyond Connecticut local color. The poetry of its prose and the relevance of its 1930s issues to our present moment make this decade old narrative meaningful for our present moment. Even the title, I think, is splendid: On Borrowed Wings could refer to Adele attending as Charles, or a working-class student at a bastion of privilege and power, or more. As Adele put it: “I felt just as I had during the Activities Rally, like the great hand of fate had uprooted me from my humble station and flung me into a wonderland. Yale had to be the only place on earth where people swam in pools, ate with sterling cutlery, clashed swords for sport, and did it all with an air of breezy nonchalance.”