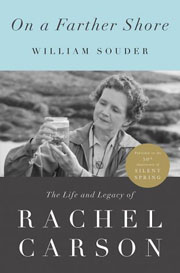 Midcentury America was a time of economic prosperity, innovation, and optimism, despite the Cold War, McCarthyism and the insidious hazards of nuclear fallout and DDT unleashed on the world. Once Rachel Carson blasted on the scene with her buzz-killing book, Silent Spring, the world changed. The public, initially intoxicated by the post-war economic boom, had welcomed newfangled compounds capable of ridding the world of pests of all persuasions, until Silent Spring obliterated unsustainable, maladaptive ignorance. Carson heroically nudged people awake to troubling truths with a pivotal text that unhinged blind faith in the sugar coated half-truths of government propaganda whose content “held within it the outlines of a partisan divide over environmental matters that has since hardened into a permanent wall of bitterness and mistrust” still evident today.

A veteran journalist, William Souder offers a powerful biography of Rachel Carson in On A Farther Shore, demonstrating how the historical and cultural milieu in which Carson was immersed led her to write her groundbreaking book. Published on the fiftieth anniversary ofSilent Spring, On a Farther Shore creates a complex portrait of Carson as an innately inquisitive, shy woman with talent that matched her ambition. Her love of the living world compelled her to take tremendous risks despite powerful detractors, and she eventually completed Silent Springeven as she fought a losing battle against cancer. In concise and elegant prose, Souder shows Carson’s evolution from biologist to award-winning author during a time when both the Earth’s population and the development and deployment of lethal poisons expanded phenomenally.

Carson’s public life as a writer started with her joyful ambles down brambly paths to her beloved sea, where she would wade in surf to show readers the creatures living beneath the ocean. Only after she gained popularity as a nature writer did she take on the controversial topic that transformed her. Instead of turning over rocks, she carried on correspondence with experts, trudged through thousands of documents while slogging through self-doubts as she adapted to personal hardships and debilitating illness. A naturalist first, and remarkably apolitical, Carson possessed an uncanny ability to pick and choose what she found important, even overlooking the Nazi sympathies of a writer she emulated. Souder suggests this tunnel vision may have enabled her to hone her focus.

Her education in biology and work as a writer for the U.S. Bureau of Fisheries initially led her to tide pools, not the state house. After earning accolades for her books, and publishing stories in the New Yorker, she devoted the remainder of her life to exposing the hazards of pesticides. As a federal employee, she had had access to studies that showed extensive injuries to wildlife and workers exposed to DDT. She dubbed these chemicals, lauded for their beneficial use in eradicating bedbugs, malaria, and agricultural pests, “elixirs of death” that enter the food chain, kill birds along with insects, and lodge in the fatty tissue of animals who ingest or inhale them.

A reluctant crusader, she rallied support for protection of the natural world without losing her devotion to writing beautifully about what she loved and knew was at risk of harm. What resulted was not a polemic but a lyrical indictment of the chemical industry that continues to make some people squirm with unease. The world was not entirely prepared for her artistry—Silent Springsold out in the first two weeks after publication—but its arrival also pitted her against powerful chemical company executives who resorted to personal attacks to discredit her, even accusing her of being a Communist. She had taken on a complex scientific subject and turned a controversial topic into art of a very high order, an accomplishment not universally lauded, yet one that instigated acts of Congress after President Kennedy cited it in a public speech. Her book continues to inspire resistance among activists hell bent on stopping the incessant bombardment of the natural world with substances that disrupt hormones, alter behavior, shorten life expectancies, sicken fauna and wither flora. She left a legacy that permeates the commitment of journalists who wade through documents to apprise the public of the latest facts about far-reaching effects of the synthetic chemicals we ingest in food we eat, dust we inhale and water we drink; gases and particulates in the air we breathe; and the myriad of products that touch our skin.

Like Carson, Souder takes as fastidious an approach to research as his subject did. Nearly a tenth of the book is devoted to sources Souder relied on to establish the historical moment that ignited Carson’s passionate response to threats to the natural world. Souder provides a concise history of the conservation movement and shows how the publication of Silent Spring launched the environmental movement. At the time, protecting the natural world meant conserving wild lands and preserving natural resources, often for agricultural and extractive purposes. But that was about to change:

In 1939, the means for undoing nature itself had been discovered in laboratories in Europe and the United States. DDT and nuclear fission were to become the twin agents of a great change of heart and will . . . This was the new age, a time when nature—that part of existence outside of humanity—would no longer be the object of concern. Now it was to be the total environment, ourselves included. In the age of conservation, the species that had needed our protection were the animals and birds and fish. In the new age of environmentalism the species that most needed our help would be us.

Souder also shows us a writer struggling with her material: “Carson had also come to believe that one reason she was having trouble doing any real work was her uneasiness with the fact that human beings had acquired the means to reshape the world . . . she felt that her most cherished beliefs were crumbling.” He emphasizes the turmoil Carson experienced in a revealing passage from the extensive correspondence she kept with her dear friend Dorothy, a passage that summarized the urgency of what she suspected confronted us all. “I suppose my thinking began to be affected soon after atomic science was firmly established. Some of the thoughts that came were so unattractive to me that I rejected them completely . . . It was pleasant to believe, for example, that much of Nature was forever beyond the tampering reach of man.” Having dug deep enough in her archives, he uncovers correspondence that reveals her awareness, a half a century ago, that the negative implications of the rise of carbon dioxide in the atmosphere would be immense.

Five short decades ago, only a few hundred registered synthetic chemicals were on the market to kill insects, fungus, and weeds; bolster food supplies; imbue cosmetics with magical properties; improve the mood, take away pain, attack antagonistic cells within the body. Despite Carson’s dire warnings issued a half century ago to take a different approach—to prove a product is safe before unleashing potential harm on entire ecosystems—today, over one hundred thousand synthetic chemicals are in commercial use, unleashed on a gullible public without sufficient testing. On average, three new ones enter the market every day. Investment pours into research and development, but scant is spent on researching health and safety. In this country, proving causation after the damage is done lays the burden on those who suffer ill effects rather than the makers who foist unsafe products on a public easily hoodwinked by clever marketing strategies and lies promulgated by science-denying media.

By telling us Carson’s story in such vivid detail, Souder squeezes some hefty bellows that ought to reignite efforts to cease the whole scale destruction of our host planet—a wondrous place to which we are inextricably linked.