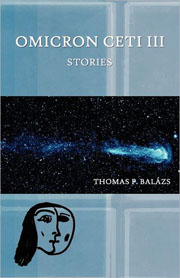 If you’re a fan of straightforward, character-driven stories, Thomas Balázs’s Omicron Ceti III, despite its seemingly sci-fi title, is right up your alley. The title story, for example, takes place in a mental institution and features a depressed narrator who is obsessed with the number three and paralyzed by self-awareness and self-doubt. In the hospital, he meets his foil, a woman who manages to escape her depression and mental trappings. Many of the book’s stories are structured around such an oppositional pair—there are no stories in here of best friends discovering something together—and are thematically linked around notions of self-awareness.

The book is split into three sections of three stories each, and each of the sections is prefaced by a quotation from a Star Trek episode. That Star Trek episode is crucial because it featured a planet named, yes, Omicron Ceti III—a world of drug-induced bliss, where even emotionless Spock falls in love, although by episode’s end, he is cured. He famously says, as the Enterprise is preparing to leave, “For the first time in my life, I was happy.” And indeed, how we achieve happiness—or at least some sense of completeness—is another recurrent theme in Balázs’s book.

Consider, by way of example, “My Secret War,” the volume’s second story. In it, a high school student slowly awakens to his homosexuality, and, in doing so, begins a war against his boarding school’s English teacher, who also happens to be gay. The story is well plotted and rich with great characters (Dr. Pierce, the English teacher, is a rigid authoritarian figure rumored to be connected to the FBI, facts which serve to heighten the supposed hypocrisy inherent in his, as far as his students understand, closeted homosexuality). By story’s end, the reader understands the title as ironic: the young man has not, in fact, been battling a hypocritical adult, but has been engaged in a sort of war with himself over whether or not he’ll grow up to be someone capable of allowing more mystery and shades of gray than he’s willing, as a teenager, to tolerate.

Perhaps what most links the characters in Omicron Ceti III is that they consistently fall into something like a weird trap that might be summarized as The Cure Is Worse Than the Disease. In “Notes From Art History,” an epistolary story from a husband to a wife, the husband is upset by the strange sexual shifts that have happened in their relationship at his insistence (it’s slightly more complicated, but part of the joy of the story is plot-derived, and I won’t spoil it here). In “April Paris,” a young man flees his PhD studies (English, natch) at the University of Chicago for a spell in the dirty, druggy Manhattan of the 1980s, and, having solved the problem of his lack of interest in academia, finds himself with the new problems of poverty and drug use.

Again, the repetitive structure of the book isn’t necessarily a bad thing: if you’re in the market for stories that feel structurally similar, you’ll enjoy Omicron Ceti III immensely. If, however, you’d like greater variety in the flavor of your fiction, you are probably best off hoping that Balázs—a clearly talented writer—stretches a bit further next time out.