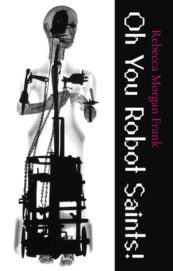 People have long been fascinated by mechanical reproductions of animals and humans. Thomas Edison, for example, created a “mechanical Eve,” a doll that would “talk” using a small phonograph. In her new collection Oh You Robot Saints! Rebecca Morgan Frank offers a poetic response:

Oh, man has made her in his own image
for beauty and service, oh, man has
made her, a more pliable Eve
with no desire of her own.

Frank probes this obsession with creating automatons in depth in this book, with poems on everything from Vaucanson’s “digesting duck” to a Japanese “robot priest.” To her credit, she examines “the ones who make” as well as “the ones who are made.” As Frank states in “The Mechanical Eves,” this desire to create beings in our own image reveals our “longing / to be gods.” This is a particularly masculine desire, Frank notes, as Eve is built “from the ribs / in men’s brains” in order to “make a life / like a woman could.”

Fertility comes up often in these poems, especially in “Ode to the Robobee,” where we see fourteen sonnets devoted to the creation of a robotic bee whose sole deficit is its inability to reproduce. In section xi, we learn how robotics has entered the realm of surgery, that most delicate of tasks of the human hand: “my uterus / is removable by a robotic arm,” Frank states, glibly noting the irony of the sterile robot making a human sterile.

As the collection progresses, Frank begins to see the human body as a kind of machine. In “Self-Operating Machines,” she writes:

Everything is a clock inside, geared
and oiled to sing and turn—the body,

even, no different than that of medieval
mechanical monkeys lining the bridge

While this comparison at first seems humorous, her observation that “We were all once part / of a set of nesting dolls” makes us see human reproduction as mechanistic. There is no robot of any kind in the six sections (not counting the missing part, titled “[Redacted]”) that make up this poem, which deals with missing girls that were friends of the narrator. One of the elegies is for her friend Katie W., who was last seen entering a haunted house. The poem ends:

They never found
the body. But I keep seeing her last turn, her

wide toothy smile, her wave.
Her tiny body, smaller than mine.

I never saw her again, never again
stepped into a haunted house.

I now knew what fear was. What it was
to be a girl, to always be at risk of vanishing.

Could Frank be seeing girlhood as a kind of mechanistic construct, a cultural role that will shape girls into socially-approved women—“a more pliable Eve / with no desire of her own”? She leaves the reader to connect the dots.

In the last poem of the book, “Restorations,” Frank makes another leap, connecting automatons to works of art. “Restorations” reminds the reader about various attacks on works of art, including the man who attacked Michelangelo’s Pieta with a hammer. Frank notes: “but we had always hoped our art would be / immortal.” Closing the book on a connection between robotics and great artistry, like the Pieta, is a bold assertion. Yet it traces the human need to create robots back to the root—the creative impulse. Oh You Robot Saints! brings the sensibility of a poet to the world of automatons and produces intriguing poems that help us understand our “quest to be little gods.”