In Memory of an Angel

Every year a number of poetry books are published that seemingly don't receive the attention they deserve. Three such titles published in 2017 are Julian Talamantez Brolaski's Of Mongrelitude, Andrew Joron's The Absolute Letter, and David Shapiro's In Memory of An Angel. I discovered myself deeply engaged, for different reasons, with each of these collections. All three are fine examples of small press experimental-leaning poetry and each poet dazzles with an approach to language uniquely their own. 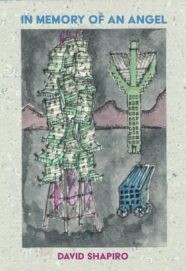 Of this group, Shapiro is the elder statesman, now in his seventieth year. He has published many collections of his own poetry since co-editing, along with Ron Padgett, An Anthology of New York School Poets (1969), including New and Selected Poems in 2007. In Memory of an Angel, borrowing its title from Allen Berg's violin concerto, charts the wondrous course poetry has wafted across his life. As remarked in the opening poem, "1963," "It is you, it is you / I keep following." No doubt Shapiro wasn't cognizant at the time that he was heralding a romance with the ubiquitous "you" of poetry that he has relentlessly pursued ever since:

The delight Shapiro takes in language's play is found upon every page here. He pays testament to the avowed nature of the relationship of poet to word. "Oh word your friend / Formless astonishing and alone." The poems achieve a natural balance, demonstrating poetry's role as interaction site between the powerful poles of playful engagement and sacred practice. "You send me longish letters. / Therefore, God exists." Shapiro mixes literary tropes with a slight frivolity, delighting in light-handed mercurial whimsy that is nonetheless heartfelt when shifting from one line to the next: "It's morning. Dawn has brought the ships out. Dawn keeps breaking our ships. // Can I tie your hair again?" Best of all, he knows that it's poetry's prerogative and not his own to decide what poems he's been given to write: "No, I didn't write my poems, but I heard the mermaids / singing, and they were singing to me." 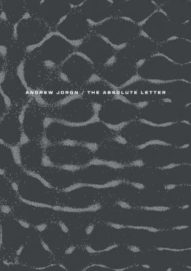 Andrew Joron's The Absolute Letter opens with "The Argument; Or, My Novalis" a mini-manifesto calling forth a poetic practice established around how "letters of the alphabet" may be witnessed "dissolved into vibrational patterns." This idea fully informs Joron's approach to writing poetry. He is devoted to the belief in an aural assonance existing between words, a direct organizing alphabet of reality: "The world is itself composed of the letters of the Absolute." His approach is musical as well as mystical at heart: "& the wound so wound, the sound so wound." Words are unveiled then veiled then unveiled again, each instance being a further unfurling of divergent combinations of sense and sound. Vowels are exchanged and rearranged, words bounce off one another in an ever-transforming cascade of echoes. Reading becomes utterly tonal, heavily invested in the cosmic play of language's ephemeral presence:

No surer treasure than the trap of my ape-shadow.

Starting from the homonym of home—

My nature a frame in fracture.

Shall I then pose X, expose my scar tissue?

Empirical to tough, the cost of empire—

What sound so wound, so round, so ruined?

As words get unpacked in a poem the meaning is examined. What's said gets unsaid, only finally to be said—sometimes expanded, other times contradicted. The examination is one of the ultimate pursuit, a chase after what informs our understanding of the real:

The Person wears a headdress, a dress of thought.

The Person is male with female characteristics, fallen into autumns
of stain & substance. His sin is a cinema of seeming, a body—sign of
both & neither meeting, teeming.

The Person wears what is: a "melancholy cloud." My closed system.

His signs point backward. His eye wants what it cannot have.

Taste waste, the One without mouth, the Eye ever over I.

Icon of the blackness of Blankness, icon of the Whiteness of Witness. 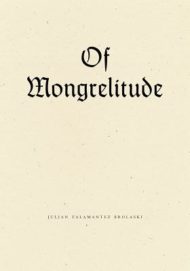 Julian Talamantez Brolaski captures the terrain of poetry's future. These poems look backward within Western literary traditions while projecting ahead to what's yet arriving. This is the language of song society and is in dire need of hearing. Not to pay heed is to risk the peril of failing the continual advancement of our arts:

I gather that "mongrelitude" is Brolaski's own coinage, and it calls to mind the state of being a mutt, a haphazard result of incongruous yet happy joining. Brolaski's spelling of many words is also idiosyncratic, with just the right hint of archaic Old English. The language of these poems is itself thus mongrel in nature. Brolaski celebrates the visionary free mixing of all peoples, languages, and sexes into one, rewriting poetic lineages to align with present necessity:

marcabru uses the word 'mestissa' to describe the shepherdess his
dickish narrator is poorly courting
which paden translates 'half-breed' and pound 'low-born'
and snodgrass 'lassie' but I want to say mongrel, mestiza, mixedbreed
melissima most honeyed most songful
what catullus called his boyfriend's eyes
honey the color of my dead dog's eyes the stomach of the bee

Decidedly gifted lyrically, Brolaski is the poet set down in the right time and place to point out to the rest of us the direction our tongues are headed. Here's where they're going and the means for us to get ourselves there as well, if we listen.

zukofsky reciting hiawatha
in yiddish on a lower eastside streetcorner

of all the bill and coo
that makes es wooing parlous

who swindle a soup
divers' showers and thir shammies

one star in thir square
of skye

amador you don't need
to get fucked up to see visions

All three of these poets confirm what many readers can palpably feel: it's an exciting time for poetry.

Click here to purchase Of Mongrelitude
at your local independent bookstore