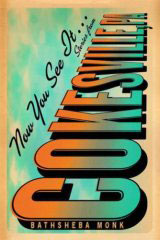 The fictional town of Cokesville, Pennsylvania, is the real main character of Bathsheba Monk’s first book, and such a portrayal seems overdue. Most people who haven’t had the pleasure of the state’s long, winding, constantly under-construction turnpike tend to think of the stretch between Pittsburgh and Philadelphia as something vaguely rural, but it’s not. Each in their time, the lumber, coal, steel, and railroad industries had all disassembled and reassembled the place by 1949, the chronological setting for the earliest of Monk’s stories, and in their wake they’ve left a dense scattering of places like Cokesville—small, tightly knit towns that themselves cluster around only slightly larger cities, a rusted-out belt of humanity that spans a distance significant enough that the two cities on either end have two different regional accents. Cokesville has everything that’s been needed for a long time to evoke that certain, elusive, small-town Pennsylvanian-ness required by fiction: a coal mine, a steel mill, an eclectic cast of old Polish and Ukranian ladies with their stern, borderline-abusive husbands—and, most importantly of all, a generation of youngsters who can’t wait to get out. No surprise why, given that Cokesville seems to its children to be transforming itself into a grisly, literal ghost town. As we learn in “Last Call (1982),” “It was becoming almost routine for the fifty-five-year-old men of Cokesville Forge to look at their newly idle fingers, start fiddling with this or that, until they finally found their way to the hunting rifle in the garage.”

The wonderful—if cumbersomely titled—Now You See It… Stories from Cokesville, PA, is a 240-page temporal odyssey of sorts—seventeen stories spanning almost fifty years and chronicling the lives of what feels like about twenty of the town’s residents. Each one comes with a timestamp, which creates an eerie, fade-in, fade-out sort of feeling as you read, as though by the time the empty space at the end of a story yields once again to Monk’s quietly confident prose, you may have very well have missed something—a marriage or a divorce, the death of someone’s uncle or someone else’s dream. At the heart of things are the Gojuk and Kusiak families and their two prodigal daughters—Theresa Gojuk, who goes to Hollywood as the mediocre-movie-star-turned-magnate-producer “Tess Randall,” and Annie Kusiak, who cycles through a series of bad marriages and struggles to find her voice as a writer. The two girls maintain a kind of psychic friendship, occasionally meeting in California or some other distant place that is, significantly, neither Annie’s current home nor Cokesville.

The eight stories mostly about Annie are the only ones told in the first person. That she’s trying to make it as a writer seems like a too-practical conceit, at first. Putting a writer in charge of a piece of first-person fiction causes a unique brand of trouble, and forces us to wonder how self-consciously constructed the narrative really is: with every story Annie tells, we have to wonder whether we’re reading one of her stories or a story about her struggle to write stories. Plus, the Annie stories don’t have the cultural texture of the third-person pieces—though they possess a compelling energy enhanced by our growing familiarity with their narrator, the contemporary feel makes it seem as though Annie is groping, herself, for something less rich than what we’re able to take ourselves from what (it ultimately turns out) are likely her own stories about Cokesville’s past. Eventually, the context of Annie’s revelation to turn away from her previous writing pursuits—to turn towards the home she has been fleeing for thirty years—redeems not only her character but also those stories of her struggle to run, giving them the air of a confession the young, Cokesville-bound Annie was never able to make in Father Novakowski’s church.

“Now you see it. Poof. Now you don’t”— the titular phrase and its inevitable answer turn up from time to time in Monk’s stories, in the voices of several of Cokesville’s characters, creating an additional level of sorrowful, ironic, and ultimately resigning connection between the people of a town who dislike each other as often as the opposite. By the time Annie extends her magical metaphor (“We’re like rabbits that were pulled out of a magician’s hat, coming out of nowhere for the show. Disappearing before anyone thinks to miss us”), she could be talking about herself and Theresa, or the people of Cokesville in general. Annie isn’t in the final story, about another Cokesville expatriate and her bohemian Russian lover, a man who makes art of sperm donation and can’t find poetry in the rush of Boston. By this time, Annie Kusiak is at rest with Theresa, as well as the other Gojuks and Szewzcaks, the Szilborskis and Herbinkos—all are phantoms, dancing on the dirty breeze of the past.