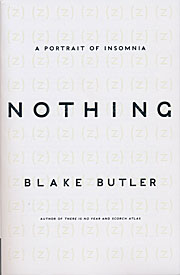 Insomnia has long been fodder for poets: Sylvia Plath, Dante Gabriel Rossetti, Elizabeth Bishop, Walt Whitman, and others chronicled the debilitating struggle with sleep. Blake Butler’s first book of non-fiction, Nothing: A Portrait of Insomnia, shifts that most poetic trouble to prose, and the transition brings new complications and perspectives to the condition. Butler’s recursive, malleable syntax not only mirrors the blurry minds of the sleepless, his prose redefines that “sleeplike helpless state.”

Nothing is fluid in its fragmentations. While Butler always returns to “so many nights that [keep] me up long after I lay down,” the narrative bounds between an impressive array of subjects and tones. Butler travels to write at his parents’ home—he is a partial caregiver to his father, whose dementia has spurred “the destruction of his aging brain,” causing him to leave “meatloaf in the cabinets with the clean dishes” —and he laments his helplessness here: “For all the ways I feel failing as a person, this is the most palpable of all.” Butler’s self-effacing memories, including masturbating to a Family Feud screenshot of Pamela Anderson and overeating his way to 260 pounds in ninth grade, combine with a care for his father to create an absolutely genuine persona, stripped of the pretensions and posturing common to memoir.

Even the book’s structure mirrors the fight for order and focus in the tired mind. Nothing spins between Butler’s real childhood memories, surreal imaginations, and current, almost biological encounters with his computer. In the midst of these necessarily whirling sections, Butler tucks absolute gems. “A Condensed History of Night” unfolds a history of sleep while concurrently expounding the constancy of human invention and creation. His breadth of reading, from Wittgenstein to Borges to Lispector, informs the possibility that an overtired mind can find escape in words.

Perhaps the most inventive metaphor of Nothing is the representation of the house as central location for sleep. From bed to room to hallway to property, Butler redefines our sense of domestic space. Staid architecture becomes the muddy artifice of mind. He carries the metaphor into filmic representations of home-space; particularly smart is his rendering of Stanley Kubrick’s spatially disoriented The Shining, “in which no characters are pictured sleeping.”

Butler represents insomnia as physiological and emotional fanaticism, an internal fear with external symptoms. Sprawling sentences descend into capitalized confessions, and then italicized, second-person whispers. Butler’s previous books—particularly There is No Year andScorch Atlas—embraced the concept of book art, and Nothing is also refreshingly experimental. Spaced text, metafictional footnotes, and a glow-in-the-dark cover complete the reading experience of disorientation.

As Nothing progresses, Butler’s range of sleep-concerned references become nearly encyclopedic: “‘You don’t try to photograph the reality,’ Jack Nicholson said, quoting Kubrick, in an interview years after the director died inside his sleep, ‘you try to photograph the photograph of the reality,’ and somewhere in this, the replication forming its own version of the same—to want and want at and never enter.” For Butler, straight anecdote is never sufficient. References are layered and cloaked in his trademark recursivity, making the reading experience organic work, though never laborious. One would expect no less from a mind so coaxed into continuous thought. Nothing, despite its title, is about something palpable: one man’s concerted, successful attempt to distill a wayward, awake world into words.