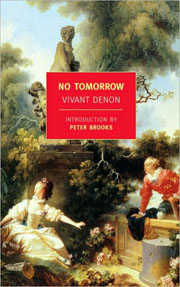 The night was superb; it revealed things in glimpses, and seemed only to veil them so as to give free rein to the imagination.

This little book of lovely and loving deceptions has had a colorful history. First published in 1777 by one M.D.G.O.D.R.—which Peter Brooks, who introduces this bilingual volume, lets us know should be interpreted as Monsieur Denon, Gentilhomme Ordinaire du Roi—No Tomorrow was long attributed to Claude Joseph Dorat, an eighteenth-century writer of some note. As if possible misattribution weren’t enough, the tale was later recast as a pornographic adventure story in one instance, bowdlerized by Balzac in another, and released in 1812 in a revised edition with no author’s name or initials whatsoever.

The variety of guises in which No Tomorrow has appeared—and this handsome new translation by Lydia Davis must of course be considered another—is in keeping with its subject: the semi-divine smoke and gorgeously warped mirrors of eighteenth-century erotic adventure. Our unnamed narrator, twenty years old at the time of the events in question, leaves the opera one night in the company of his lover’s friend, the enigmatic, beautiful Madame de T——. He accompanies her to the home of her long-estranged husband, with whom she hopes to reconcile without sacrificing her racy lifestyle, and agrees to lend his (im)moral support in this endeavor. The husband greets them, frowns a bit, then goes to bed, leaving the pair at liberty to climb the proverbial mountains of pleasure. Or rather to think of climbing them, to resist climbing them, to begin the voluptuous ascent, to scamper mischievously, coyly back down:

“Oh,” she said in a heavenly voice, “let us leave this dangerous place; our desires keep multiplying here, and we haven’t the strength to resist them.” She led me out.

The evening of moonlit exertions reaches its crescendo in a literal hall of mirrors hidden away in the husband’s château. This secret room, built for Madame de T——’s pleasure years before, seems to our young narrator to be the place where all will finally be unveiled . . . except that a servant barges in at the crucial moment, so that instead of veils being cast aside, more are put in place. Which isn’t to say that the narrator leaves his night of anticipation empty-handed. In fact, his admiration for Madame de T—— (in whose clever scheme he played a willing, if unwitting, central role) is greatly increased by night’s end, and he leaves more adequately armed to carry out his own conquest of love’s complexities.

At fewer than thirty pages, No Tomorrow is a marvel of compression. Denon (aided and abetted by Davis, no stranger to the economical arts) builds clever commentary on the art of love into effective narrative exposition, as when he writes, “Kisses are like confidences: they attract each other, they accelerate each other, they excite each other.” Kisses simultaneously commented on and accomplished! No Tomorrow, then, both describes and embodies the ethos—perhaps a little too lost to us now to appreciate fully—of seeming to withhold while actually giving. And giving a great deal.