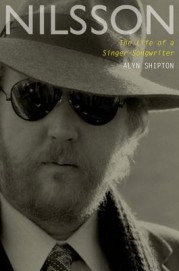 There are a million books about Bob Dylan. There are a million and five about The Beatles. Everything from the supergods' musical influences to their women and their philosophical underpinnings has been covered in loving and sometimes excruciating detail. Greil Marcus has made a cottage industry out of Dylan. Ditto for Mark Lewisohn with The Beatles.

So why is there only one full-length biography on Harry Nilsson, and why has it taken nearly twenty years since his death for it to come out? Fortunately, Alyn Shipton's Nilsson: The Life of a Singer-Songwriter is well worth the wait. What Shipton figured out that other biographers apparently overlooked is that Nilsson was one of popular music's great singer-songwriters and that his life was as sublime and tragic as a Shakespearean drama, readymade for the biographer's art.

As the back cover reminds readers, Nilsson won Grammys, wrote and recorded hit songs like 1969's "Everybody's Talkin'" and 1971's "Without You," and composed music for acts as diverse as The Yardbirds and The Monkees. A reminder is in order because, as the back copy also mentions, Nilsson is one of music's most underrated performers; you've heard his songs, you just don't know it. He's remembered today more for being John Lennon's sidekick during the former Beatle’s booze- and drug-fueled Lost Weekend of the mid ’70s—a low point of that escapade involved Lennon and Nilsson getting booted from a club for heckling the Smothers Brothers—than for his own impressive craftsmanship.

Shipton resurrects his subject from the black hole of Beatles marginalia with a deft and riveting history. He begins with Nilsson's childhood, which was marred by a dead father and an alcoholic mother. The irony was that his father wasn't even dead; he'd abandoned the family and the mother had simply covered it up. Nilsson's father, like Lennon's own, resurfaced later when the son became famous.

Artists are often driven by the deficiencies of their youth, and Nilsson was no exception. He used his pain to compose the bittersweet lyrics of lost innocence and yearning in "Daddy's Song," "So Long, Dad," and "1941":

It was "1941" that sparked Beatles' press officer Derek Taylor to send Nilsson's album to the fab four in London, which led Lennon and McCartney to proclaim Nilsson their favorite artist in 1968. Nilsson's career hit a sweet spot with the 1971 release of his album Nilsson Schmilsson and the singles "Without You," "Jump Into The Fire," and "Coconut." The last had the singer deploying his three-octave range to play the roles of narrator, doctor, and female patient.

Nilsson never saw that kind of success again. He soon parted ways with producer Richard Perry, a casualty of the artist's relentless need to find a new sound. His eclecticism paid off with a collection of American standards (long before it was fashionable) and an album of Randy Newman songs. But tragically, it also put off listeners. Shipton documents Nilsson's downward spiral into addiction and the career-damaging loss of both record company and voice. The singer would spend the '80s trying to recapture his audience and his voice, and succeeding at neither.

In midlife, Nilsson finally found a measure of happiness with his third wife and their family, but a bankruptcy and years of addiction caught up to him. He died in 1994 at age fifty-two. Like the 2010 documentary Who Is Harry Nilsson (And Why Is Everybody Talkin' About Him?), Shipton leaves the audience wanting to know more about this singer-songwriter, bon vivant and friend to everyone from The Beatles and Monty Python to Keith Moon and Jimmy Webb. But more importantly, the biographer reminds readers why Nilsson mattered. It was his music, which like the artist himself is long overdue for a reassessment.