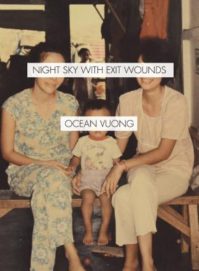 “In the body, where everything has a price, / I was a beggar.” So begins Ocean Vuong’s brilliant full-length debut, Night Sky with Exit Wounds. In it, Vuong shows himself to be a master of the lyric moment. With an expert blend of the tender and the destructive, Vuong compounds the contradictions of life in wonderfully impressionistic vignettes that give us the feeling of the feeling, so to speak, without offering us a logical resolution. In Vuong’s world, “entering a song” is “to lose / your way back”—and something similar happens to us as readers of his work.

Throughout Night Sky with Exit Wounds, Vuong turns to history and to myth, allowing them to inform and magnify his poems without ever losing their lyric intensity. Take “Telemachus,” for instance:

Like any good son, I pull my father out
of the water, drag him by his hair

through white sand, his knuckles carving a trail
the waves rush in to erase. Because the city

beyond the shore is no longer
where we left it. Because the bombed

cathedral is now a cathedral
of trees. I kneel beside him to see how far

I might sink. Do you know who I am,
Ba? But the answer never comes.

Here Vuong writes a classical figure into the modern day. Vuong’s Telemachus wants to be “like any good son,” faithful to his father. But while the classical Telemachus is straightforwardly the Good Son—tirelessly awaiting his father’s return and fighting nobly beside him toward the tidy conclusion—Vuong’s is a post-Freudian Telemachus, whose loving gesture of pulling his father from the water is inextricably linked with a mode of Oedipal violence, dragging the father by his hair.

What has intervened between Homer’s Telemachus and Vuong’s is not just psychoanalysis, but also the horrors of history. The problem Vuong’s Telemachus must face is not merely a swarm of ill-mannered suitors, but rather the impersonal obliteration of an entire bombed-out city. We soon learn that this large-scale historical violence has also had a directly personal effect on this Telemachus:

is the bullet hole in his back, brimming
with seawater. He is so still I think

he could be anyone’s father, found
the way a green bottle might appear

at a boy’s feet containing a year
he has never touched. I touch

his ears. No use. I turn him
over. To face it. The cathedral

Odysseus is dead; there can be no triumphant return. Instead, Telemachus must be the hero—where heroism becomes the courage “to face it,” to look into the awful face of what humans have done to one another. Telemachus must do this not only for himself, but for everyone, anyone—after all, this Odysseus “could be anyone’s father.” And yet, Odysseus still remains firmly his father:

The face
not mine—but one I will wear

to kiss all my lovers good-night:
the way I seal my father’s lips

with my own & begin
the faithful work of drowning.

This ending is a tour de force, resolving and complicating at once all that has come before. Telemachus in a sense becomes Odysseus, and begins anew “the faithful work of drowning.” Yet this becoming is in some sense a mask—the face “I will wear.” Is this a collapse into the demands of Odysseus’ role, or an assertion of Telemachus’ free choice? The poem offers no easy answers—instead, it leaves us with the haunting beauty of that final line.

While Vuong handles such mythic allusions expertly, he does not depend on them. “Homewrecker,” for instance, is an intimate and tightly-focused glimpse into passion. It is the poem that first introduced me to Vuong’s work, and it remains one of my favorites for its seamless blend of love’s desire and destruction, and for its urgency and its precision. It is, quite simply, a stunning poem.

There is far more to say about Night Sky with Exit Wounds, which explores, among others, questions of war, identity, language, immigration, familial violence, and literary tradition. To do the book critical justice would require a book, so suffice to say that it is one of the most highly anticipated works of the year for good reason: it is a book to be read and re-read, and a debut that will cement Vuong’s status as one of the most important new poets writing today.