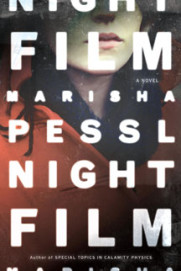 Marisha Pessl’s well-received 2006 debut, Special Topics in Calamity Physics, is a murder mystery and conspiratorial political thriller hidden within a winning Bildungsroman. But it also makes a strained and unsuccessful attempt at clever lyricism in the manner of Nabokov, even to the point of borrowing the multi-lingual master’s lepidoptera. Fortunately, readers who struggled with the inertia generated by Calamity Physics’ leaden metaphors (e.g., “[My heart] thrashed like an octopus thrown to the deck of a ship”) will be happy to learn that with Night Film Pessl has jettisoned her first novel’s overwrought style for a picaresque horror tale that demonstrates above all her obvious strength as a storyteller. Though Night Film is about 600 pages long, it demands to be read in just a few days. It fulfills those classic criteria of a good thriller: you will not be able to put it down, and you’ll stay up as long as it takes to finish it. Anyone with a long flight, endless commute, or a week at the beach ahead of them should equip themselves with Night Film.

The book’s narrator, hard-boiled investigative journalist Scott McGrath, acts as the reader’s breathless surrogate in uncovering clue after clue—and mystery after mystery—related to the reclusive and sinister horror filmmaker, Stanislas Cordova, and the apparent suicide at twenty-four of his brilliant, beautiful, piano-prodigy daughter, Ashley. McGrath has already tried to expose Cordova, which resulted in a slander suit that cost him his career and his marriage. But when Ashley turns up dead in an abandoned warehouse in Chinatown, McGrath re-commits himself to searching for the truth about Cordova. He acquires two sidekicks for his quest through a phantasmagoric Manhattan and environs: Hopper, a troubled and morose young drifter who loved Ashley when they were both teenagers, and Nora, a pert nineteen-year-old aspiring actress just arrived in New York City from Florida with enough colorful family history, outlandish clothes, endearing habits, and moral heroism to merit a novel of her own.

Cordova—Pessl’s persuasive if larger-than-life mélange of Kubrick, Lynch, and Polanski—is the object of a cult devoted to uncovering his films’ hidden messages as well as the secrets of their possibly criminal production. While Cordova hasn’t released a film since 1996, his admirers continue to hold middle-of-the-night screenings in underground tunnels and caverns. And though his work has inspired at least one copycat killing inspired by the onscreen murders, his devotees claim to be empowered by his message to “freak the ferocious out”—the philosophy that, as McGrath glosses it, “to be terrified, to be scared out of your skin, was the beginning of freedom, of opening your eyes to what was graphic and dark and gorgeous about life, thereby conquering the monsters of your mind.”

Though Cordova’s is a credo of personal liberation, McGrath chases pervasive hints that the director purchases his artistic freedom at the price of others’ lives, whether those of his actors (whom he may be forcing to endure in reality his films’ horrific fictions), his neighbors at his upstate New York compound (who testify to strange occurrences including an odd smell in the air when Cordova burns his garbage), and even his daughter (who, in the novel’s most fantastical implication, may have been part of a literal devil’s bargain guaranteeing the filmmaker’s artistic inspiration and success). But McGrath’s obsessive pursuit of Cordova comes to resemble Cordova’s own obsessive pursuit of his art, a sophisticated mirroring that undoes the novel’s ostensible moral binarism and grants it a thematic complexity its beach-read pace might not have lead one to expect.

In addition to McGrath’s swift narration, Pessl also parcels out information about Cordova through interpolated excerpts from McGrath’s case notes, police and medical records, and Internet sources such as the New York Times and Vanity Fair as well as the black sites where the Cordova cult gathers information about the mysterious genius. Pessl and her design collaborators especially excel at mimicking the ephemera of the Internet, down to the inane spats in the comments sections and the fear-mongering clickbait headlines (“5-Hour Energy Could Kill You”). This device not only lets the reader participate in collecting clues, but more importantly replicates the very contemporary sensation of titillating paranoia that comes from following a sinister news story across the wilds of the screen until your eyes ache. Some of the novel’s early reviewers charged Pessl with mere postmodern gimmickry for using faux-Internet texts, but in fact this technique decisively places Night Film in the Gothic and thriller traditions, which have juxtaposed archaic mystery with up-to-date communication technologies at least since the epistolary structure of Frankenstein (1818) and the documentary mode of Dracula (1897).

A different question of literary form raises some doubts about the artistic merit of Night Film, however, despite its undeniable entertainment value. Pessl pointedly creates in Cordova a figure who doesn’t quite exist in today’s culture: an artist of such authenticity and integrity that his works seep into the real lives of its audience members even as he manages to withhold his secrets and enchantments from the pervasively debased gossip of the information economy. Cordova fulfills the bright Romantic hope—while possibly validating the dark Romantic fear—that imagination, rather than being diluted by distraction and cynicism, may transform reality through the agency of art. And it’s fair to say, without giving away Night Film’s own secrets, that Pessl finally sides with such Romantic ambition. The novel’s wish is one voiced in a jaded tone to McGrath by a weary detective—“There might be a Starbucks on every corner and an iPhone at every ear, but don’t worry, people are still fucking crazy”—and in an exalted register by one of the actresses who worked with Cordova: “You were making a film. Something that would outlast you. Something wild. A powerful piece of art that wasn’t a commercial concoction, but something to slice into people, make them bleed.”

Themes and characters as grand as Night Film’s, however, deserve to be incarnated in better prose than Pessl tends to find for them. If Special Topics in Calamity Physics sometimes tiresomely indulged a “literary” bent for figurative language, Pessl overcorrects here by narrating the novel in merely functional and cliché-ridden sentences meant to accommodate cliffhanger chapter endings and weakly aerated by McGrath’s almost campily noirish asides and sitcom dialogue with his sidekicks, both full of instantly dated pop-culture references. Add Pessl’s obtrusive over-reliance on italics for melodramatic emphasis and her tendency to spell out implications most readers will already have grasped, and Night Film’s prose begins to look too much like that of a “commercial concoction”:

“Nora,” I whispered, walking straight into the woods.
When I found the fallen log, I stopped dead.
The branches and dirt had been thrown aside.
And the canoe was gone.

This kind of formulaic writing undermines Pessl’s premise about the transcendent potential of art because it fails to be a convincing literary correlative to Cordova’s visionary filmmaking. Night Film’s stylistic deficits therefore prevent Pessl from fully realizing her own Cordova-like world of aesthetic intensity beyond our mediated culture. That the thrill of the novel’s plot, the charm of its characters, and the provocative seriousness of its themes very nearly make up for this flaw testifies nevertheless to Pessl’s abundant talent and intelligence. The suspense, then, is not just in her novels but also about them: one can’t wait to see what she’ll do next.