Join us in welcoming a writer the New York Times dubs “one of America’s most important novelists” to the Twin Cities! Nicole Krauss will be reading from and speaking about her most recent novel, Forest Dark (Harper), a riveting story of parallel transformations and self-discoveries.

Copies of Forest Dark and other books by Nicole Krauss will be available for purchase at the event courtesy of Magers & Quinn Booksellers, and a book signing will follow the presentation. We hope to see you there!

This event requires a ticket to attend. Advance ticket sales have now ended, but tickets are available at the door for $5 each. Doors open at 6:30pm.

Nicole Krauss started writing poetry when she was a teenager, and has since published four critically acclaimed novels and several short stories. Her fiction has been published in Harper’s, The New Yorker, Esquire, and Granta’s Best American Novelists Under 40. In 2010, Krauss was named as one of The New Yorker’s “20 under 40” writers to watch. Her debut novel, Man Walks Into a Room (Doubleday, 2002), a finalist for the Los Angeles Times Book Prize, was followed by The History of Love (Norton, 2005), a finalist for the Orange Prize for Fiction and winner of the 2008 William Saroyan International Prize for Writing, and Great House (Norton, 2010), which coalesces rather appropriately around a writing desk, and received the 2011 Anisfield-Wolf Book Award for fiction. Krauss currently resides in Brooklyn. Learn more at http://www.nicolekrauss.com/.

If you are an individual with disabilities, please let us know if you require any special accommodations to enjoy this event — write us at info [at] raintaxi [dot] com.

What people are saying about Nicole Krauss:

On Forest Dark: A Novel 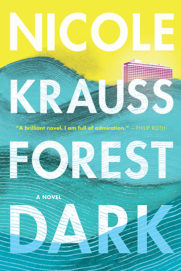 “Krauss’s elegant, provocative, and mesmerizing novel is her best yet. Rich in profound insights and emotional resonance, it follows two characters on their paths to self-realization… Nicole’s conversations with Friedman and Epstein’s with Klausner about God and the creation of the world are bracingly intellectual and metaphysical. Vivid, intelligent, and often humorous, this novel is a fascinating tour de force.”
—Publisher’s Weekly, starred review

“Krauss, as ever, writes beautifully about complex themes, and she has a keen eye for the way Israel’s culture, slower but more alert to violence, requires its American characters to reboot their perceptions.”
—Kirkus Reviews 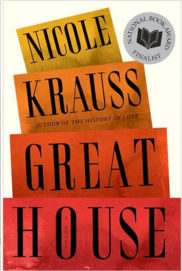 “Great House is a smart, serious, sharply written novel of great care and yearning. And it is so not despite or even because of Nicole Krauss's non-literary blessings, but because, simply, she can write. That fact will be irritating to some, but can't we just be happy about the appearance of a good book and try to resist the temptation to turn it off the box?”
— Patrick Ness, The Guardian

“Krauss has taken great risks in dispensing with the whimsy and humor that she summoned for her tragic vision in “The History of Love.” Here she gives us her tragic vision pure. It is a high-wire performance, only the wire has been replaced by an exposed nerve, and you hold your breath, and she does not fall.”
—Rebecca Newberger Goldstein, The New York Times

On The History of Love: A Novel 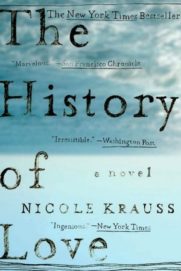 “No one must rob you of the chance to experience Nicole Krauss's new novel in all its beautiful confusion. . . Though it's a relatively short book (some pages contain only a sentence or two), The History of Love involves several narrators and moves back and forth through the 20th century and around the world. But that's just for starters: It contains a lost, stolen, destroyed, found, translated and retranslated book called "The History of Love," characters named for other characters, cases of plagiarism and mistaken identity, and several crucial coincidences and chance meetings that are all maddeningly scrambled in an elliptical novel that shouldn't work but does.”
—Ron Charles, The Washington Post

On Man Walks Into a Room 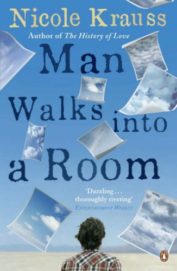 “Krauss’ prose is casually dazzling, as are the ideas she explores through Samson. Robbed (or freed) of identity, he’s a man bereft of preferences and pet peeves, stripped of gestures and habits. Who, then, does that make him? For starters, a thoroughly riveting character.”
—Entertainment Weekly