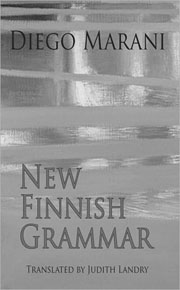 In New Finnish Grammar, Diego Marani has set himself the difficult task of telling the story of a man who has no story. The central character, Sampo Karjalainen, has lost all memory of the past—we don’t know quite how—and also his command of language. To judge from the nametag sewn onto his jacket, Sampo is Finnish, though he’s been brought to a clinic in Treiste and revived under the care of a physician, Doctor Friari, who singles him out for care from among the countless wounded soldiers only because the doctor, too, is Finnish. Doctor Friari arranges for Sampo to return to a hospital in Finland, where he is instructed in the Finnish language by a half-mad priest named Koskela whose beliefs are more deeply rooted in the lore of the Kalevala than the New Testament.

How can it be possible for a man with no access to language to tell us his story? Marani overcomes that hurdle by allowing Doctor Friari to decipher Sampo’s tale after the fact from notes he left behind in various journals while struggling to reacquaint himself with human speech. Friari augments, fleshes out, and clarifies Sampo’s notes as well as he can, but Sampo is a morose, taciturn individual, and the most interesting elements to emerge have less to do with his personal experiences than with the things he learns from Koskela. For example, there are eloquent descriptions of how language “works”: “The forms of a language inevitably have repercussions upon the speaker, it is they which mold his face, his land, his habits. . .” Or: “In the Finnish sentence the words are grouped around the verb like moons around a planet, and whichever one is nearest to the verb becomes the subject. In European languages the sentence is a straight line; in Finnish it is a circle, within which something happens . . .”

Koskela’s lengthy speeches about Finnish mythology and shamanism are similarly intriguing. And from time to time he also tries to clarify for Sampo the difference between the guilt-ridden beliefs of the Finns and the Orthodox religion of the marauding Slavs who have tormented Finland for centuries—and who are even now dropping bombs on Helsinki daily.

One further dimension is added to the plot when Sampo makes an attempt to break out of his solitude by striking up a friendship with one of the nurses in the hospital. He lacks a past, and she spends her days watching dying soldiers lose their future. These differing perspectives make for some interesting conversations as the hapless young couple wanders the streets of Helsinki.

In the end, Marani doesn’t entirely meet the challenge of telling an absorbing tale from the point of view of a man with neither past nor language. The book abounds in intelligence but might have benefitted from a bit more linguistic creativity and confusion a la William Faulkner. Again and again Sampo refers to half-understood words and unintelligible phrases, to fractured articulation and concepts dimly grasped through the mist . . . but the narrative itself is entirely ship-shape and heavily polished after the fact. We can thank Doctor Friari for this—he tells us as much himself. But we might also finish the book wondering what thoughts were actually running amok inside Sampo Karjalainen’s head as he attempted to recreate himself as a Finn.