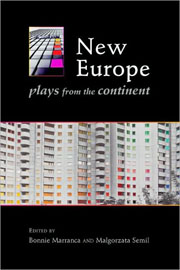 Strong plays built around socio-cultural uncertainty make up the anthology New Europe, wherein distance and isolation recur as trans-cultural leitmotifs. These works both stand alone and hang together, making for a very readable collection. Editor Bonnie Marranca frames the plays in a contextual light by ending her clear and prescient introduction with the question: “Who knows what the Oracle [at Delphi] is thinking these days while the hot winds blow this way and that?” These plays stand as one answer to that that question, revealing the emotional life of Europe over the last decade. The specters of post-war Europe are ever present; these are works adrift after Existentialism and the Theater of the Absurd. The spirit of cultural resistance may haunt European theater, but it is now a mere poltergeist instead of a revenant. It has little to resist, although tyranny is only a riot away.

Uncertainty governs the dramatic tension of each play in the collection. In Małgorzata Sikorska-Miszczuk’s The Death of the Squirrel Man, the terrorists of the Baader-Meinhof group are fundamentally unsure of what they’re resisting; negligent people reduced to shallow archetypes, they fight a kindly policeman with the literal and metaphorical heart of a pigeon. In contrast to political uncertainty, the intrinsic doubt of relationships drives Petr Zelenka’s Tales of Ordinary Madness, as generations of interpersonal insecurities are revealed: a neurotic onanist has a mannequin come to life; a woman meets new lovers by calling a nearby payphone; another man is harassed by a blanket while sleeping on a mountain of newspaper clippings about tragedies that long ago replaced his bed. The uncertainty of connectedness stands against the unarticulated, isolated angst that drives the characters in Igor Bauersima’s norway.today. Socially adrift, and without purpose, they serve as a compelling manifestations of Camus’s arguments about suicide in “The Myth of Sisyphus”—only now, they have the Internet and the ability to criss-cross a demilitarized Europe almost as easily as Americans travel domestically. Push 1-3, by Roland Schimmelpfennig, reveals uncertainty by exposing the illusions of corporate success, as Europe encounters the alienation within the white-collar idiom that Americans have been experiencing since the Reagan era. In this play, highly professional people are just as adrift and isolated as the rest of the population—maybe more so. The show furthers its uncertainty by having a strong sense of mise-en-scene, even though it is performed on a bare stage.

In contrast to the rest of the collection, Hotel Europa conveys its ambiguity directly to the audience; as the author Goran Stefanovski puts it, different audiences “saw the production in a different order of scenes, and consequently with a different narrative flow.” Here the usually collective experience of watching is denied, as the show makes its viewers a conglomeration of separate sub-groups without access to each other’s experience. In Juan Mayorga’s Hamlyn, the most traditionally narrative of all the plays, shame, power, machismo, and poverty all complicate a singular doubt about the guilt of an accused pedophile. Its open denouement serves to show a human connection trumping the broader problems of cultural uncertainty. The language-driven Sa ka la, by Jon Fosse, takes the most certain of events, death, and reveals its unknowable nature via a family matron’s unexpected stroke. Her language is reduced to phonemes, while the rest of the characters are consistently left with only the word “yah” to convey a variety of emotional states—too much work for one lonely word.

These plays are able to use a scope of setting and production painfully absent from American work because, while Europe’s future may be uncertain, its present supports the arts. These are excellent pieces of art that, indeed, feel a little blown about by the hot winds of our time, but while they may lack the stalwart cultural agendas of the previous generation, these diversely theatrical works show the precarious situation of Europe in the new century: a continent of great promise and tumbleweed uncertainty. Marranca hopes this collection will be the first of an ongoing series. It should be. Hopefully, the next installment will include works from European theater companies like Societas Raffaello Sanzio from Italy, Hoipolloi from England, and Hotel Modern from Holland. American theater practitioners, scholars, and ticket buyers would do well to be informed by this work.