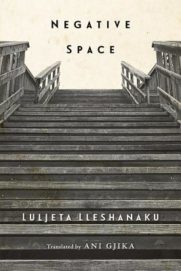 “I was a child when my first teacher / mispronounced my last name twice. That pricked me / like a needle. / A small needle in the earlobe. And suddenly, / my vision cleared— / I saw poetry, / the perfect disguise,” writes Luljeta Lleshanaku at the closing of her poem “Acupuncture.” Poetry as “disguise” no doubt offers a survival mechanism for anyone growing up in Albania during the tyrannical rule of Enver Hoxha, as did the author. But note the other gift that needle prick bestows: clarity. It’s this trait that makes Negative Space, Lleshanaku’s third collection of poetry in English published by New Directions, noteworthy. Negative Space draws from two unpublished (in English) collections: Almost Yesterday and Homo Antarcticus, offering the reader forty-seven poems.

Clarity can take many forms. One of them, at least in the poetry of Lleshanaku, results in aphoristic lines, evidence of hard-earned wisdom. Here are a few examples: “Nothing exists until its moment of absence.” “People speak of what they have, not what they are.” “You can’t conquer evil. Evil ends on its own.” Another form of clarity in these poems are the plethora of similes, always unique and memorable. Even taken out of context, they illuminate, like this one from “Tobacco” describing cigarette butts “as though they were spent shells / from a civil war devoid of glory.” Here’s one more of her astounding similes from “Live Music,” describing two pub-goers: “They’re here precisely for the emptiness / the vast emptiness in a divey pub / like the white, fluffy inside of artisan bread / and its smooth crust on the outside.” The similes clarify and at the same time provide depth.

This might give the impression of abstract poems. Actually, these poems are almost always grounded in a particular event or object—a used book filled with written comments, a history class, neighbors building a house, or even something as mundane as stairs. In her poem titled “The Stairs,” we can see a pattern Lleshanaku often employs in this book. The poem opens with a direct observation: “My father was obsessed with stairs.” Then it shifts perspective: “the railroad track with its yellow-and-black lines / isn’t the rattlesnake that makes your skin crawl.” Then the poem moves to another form of stairs—escalators—and makes a metaphorical leap: “Poetry, too, is a way of moving up.” That movement from the ordinary to the profound, that assured intuitive leap, is handled without effort, without pretension, recalling the work of poets such as the Nobel-winning Polish author Wislawa Szymborska.

The translations here, by Ani Gjika, create that rarest of illusions—that these poems were originally composed in English. Such is the ease of the lines, as can be seen in this excerpt from “A Perfect Day”: “Then what? What happens next? I don’t even know / and God damn it, the days are so long in May.”

There’s only one problem with Negative Space: it lacks an introduction offering some biographical information on the author, which could help in building her a readership here in the U.S. But this is a minor flaw in a book that’s like “a low cloud of gunpowder / in a temporary ceasefire zone.”