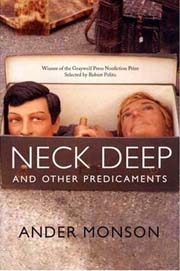 Ander Monson has a geeky devotion to many things: computers, disc golf, card catalogs, pop culture, and, above all, words. His playfulness with the last has produced a volume of poetry (Vacationland, Tupelo Press), a collection of fiction (Other Electricities, Sarabande), and this new non-fiction collection, the winner of the Graywolf Press Nonfiction prize. What's truly remarkable is that all three have been published in the space of less than two years—a trifecta that would be noteworthy even if the author hadn't received starred reviews inPublisher's Weekly for both the fiction and Neck Deep. Monson seems well on his way to establishing himself as an important voice in contemporary literature, and could conceivably bury us in books of all forms and genres before the end of the decade.

In this often amusing, inventive, and unconventional approach to autobiography, Monson comes at us sideways with personal revelations and observations that are alternately filled with infectious enthusiasm and shamefaced contrition. Acutely aware of the danger of prose becoming prosaic, he breaks from the confessional mode of so much literary nonfiction and instead uses forms that mirror what the reader imagines to be his thoughts—disjointed and poetic at times, sometimes tightly organized, at others free flowing, and at still others frenetic. The result is a complex and surprisingly consistent mix.

In "I Have Been Thinking About Snow," the second essay in the collection, Monson intersperses commentary and remembrances with irregular lines of periods, the dots representing at once the natural pauses of writing—as though he held down the period key in between his thoughts—and the snow itself. Here, alternating with meteorological data and vague observations about beauty, we get glimpses of Monson's childhood in Upper Michigan:

..................................Is snow a lack or a mass. The white suggests the lack, but such weight! I used to demand that my brother cover me over with snow until it weighed so much that I could not move. My head would pop out of the patted-down bank like a Whack-a-Mole. My brother would begin to pelt me with snowballs. That weight would feel so good above me.

The observations gradually grow briefer and more remote, the sections of dots taking over the page much the way a white-out overtakes a road in a winter storm, until we reach two pages covered in dots, the only text "such" and "isolation," separated from each other so that even these words can't seem to find a meeting place. Then the text begins to build again, giving the feeling of the writer coming back into focus. This prose-poem, experimental essay, or whatever label you can affix to it, contains all the pleasure of poetry's negative spaces—open for interpretive readings—combined with the field-guide-to-life qualities of good literary non-fiction. Monson serves up frank honesty along with opacity, sometimes in the space of a few dots, and both are the better for the combination.

The book begins with two experimental pieces—a rigidly regimented essay in the form of a Harvard outline followed by the aforementioned amorphous and dotted homage to snow—so the third piece, "Cranbrook Schools: Adventures in Bourgeois Topologies," comes as a surprise with its funny, provocative, and straightforward prose:

Although I am not proud of it, I am waiting here for a revelation. I am waiting for meaning, for my experience to unpack itself, for my criminal history to find a kind of home, some explanation, or maybe truce.

Monson unfolds this "criminal history" with the skill of a good mystery writer, giving us just enough to keep the pages turning without telling all until he's good and ready.

Monson writes with such seeming ease, even though he seems uneasy with the role of a writer of non-fiction from whom honesty is expected, if not delivered. The specter of James Frey hangs heavy over Monson's head, and Frey is mentioned more than once in the collection as a kind of disclaimer—Monson's not necessarily giving us perfect veracity, even if he's sincerely trying. Often here the words flow like conversation—a conversation with a friend whose preoccupations you may not share but you can appreciate nonetheless. As in a conversation with a smart but excitable friend, you may find yourself at the end wondering at those spaces left, the lies of omission, the thoughts abandoned to tangents—and hoping to hear from him again soon so he can fill in some of the blanks.