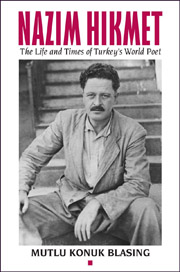 A revolutionary poet adept at epic, lyric, and didactic modes, Nâzım Hikmet gained international renown for his dedication to the common good—at great personal expense. He continues to exemplify hope in the face of oppression, and his indomitable love of life remains an inspiration. Those of us who can’t read Turkish and who love modern literature are indebted to the efforts of scholar Mutlu Konuk and her husband, poet Randy Blasing, whose co-translations of Poems of Nâzım Hikmetand the epic Human Landscapes from My Country have done much to ensure Hikmet’s legacy in the English language. Now Konuk’s biography takes us further, helping to fill in the background of this 20th-century giant’s essential work.

Born in 1902, into a family of the Ottoman upper class, the grandson of a Sufi poet and follower of Rumi, Hikmet began writing poems during his school years in Istanbul. Still a teenager, he joined Atatürk’s forces and the war for independence. While his eyes were being opened by time spent with the wounded and dying, he was also learning of Marx and Engels, of class struggle, the proletariat, and imperialism. Thus both his nationalist and internationalist commitments grew. Intending to see the Russian Revolution at first hand, he went to Moscow, studied at the university, and encountered the poetry of Mayakovsky. In 1924 he returned to Istanbul, where he wrote for Socialist newspapers. His reckless impulsivity did not make him a good TKP (Turkish Communist Party) member; he broke away, forming his own alternative party. Still, Konuk notes “an official and abiding bondage of the poet to the ideologue.”

His first book came in 1929, “formal political poetry in a voice at once lyric and public.” Although he was imprisoned for nine months, and blacklisted upon his release, “he was the best selling and most widely read author in Istanbul.” He remained an agitator, a loose cannon, charismatic, fearless, and outspoken; his poems led to his arrest in 1938 on the charge of “inciting military cadets to revolt.” The subsequent twelve years in prison, Konuk says, “made him into the poet he became”:

He learned about hunger, poverty, and injustice as he listened to his fellow inmates, and he got to know the stories and legends, the idioms and the vernaculars, of Anatolian culture . . . Prison gave his poetry a social and historical breadth and texture—a broader range and a deeper resonance.

Gaining in conviction and authority, he managed, for the most part, to maintain his equilibrium and his optimism. He called Bursa Prison a “Stone Airplane” in which he occasionally took wing:

I look at the night through the bars,
and despite the weight on my chest
my heart still beats with the most distant stars.

His prison poems are often communications with his wife. During his internment, Hikmet steadily wrote and translated, took up woodcarving, and set up a weaving cooperative, “his major enterprise.”

Formal appeal for his release began in 1949. Tristan Tzara founded the “Save Nâzım Hikmet” committee in Paris, which included Éluard, Neruda, Sartre, and Picasso. Paul Robeson and Howard Fast were speaking out for Hikmet in the U.S. The World Peace Council conference awarded him the International Peace Prize and, in 1950, he was released, in very poor health. His first words were: “’Life’s beautiful, brother!’” But the Turkish authorities were not done with him. Soon a draft notice came. He fled to Moscow, where he lived on income from his poems and plays, becoming a “prominent figure in the Moscow theater.” Constantly under surveillance in Russia, as he had been in Turkey, he traveled in Europe “with his work for world peace,” and also to China, Africa, and Cuba (always with a “shadow”). Hikmet died in exile in 1963.

For a prolific and relatively long-lived writer, the writings themselves are most revealing. We may take Konuk’s remark on “the inextricability and irreconcilability of the poet’s art and life” as an acknowledgment of the challenge that any literary biographer faces. Hikmet “comes to us swathed in legends,” given the many memoirs and biographies written by friends and acquaintances. Also, as Konuk notes, “Nâzım made up his life story as he went along, and he is no more reliable a source of information about his life than anyone else.” Aware of the hazardous and delicate nature of her undertaking, she says: “Different Nâzıms lived different histories in different places.”

The book’s three-part structure, chronological on its face but also sensibly topical, is further pleasingly enclosed in a circle, beginning and ending with the same poem. Konuk’s treatment of the external circumstances of politics and society, and of Hikmet’s own experience of prison, exile, and repression, is outstanding. A man of words, he “arrived at an ideologically charged moment of linguistic fluidity and vitality.” Atatürk’s radical introduction in 1928 of a new alphabet (switching from Arabic to Latin) had various mind-boggling ramifications. Konuk nicely elucidates these and their effect on Hikmet’s poetry.

The author also shines as a literary critic, providing sensitive discussion of Hikmet’s stylistic evolution—including early experiments with typography, playing with font sizes, using cinematic cuts (his filmic involvements were many)—as modernist poetics and anti-imperialist politics converged. To address new social and historical realities, neither the traditional Ottoman verse nor the syllabics of newer poets seemed adequate. He developed his own free-verse form, a new sound, sometimes combining poetry and prose, and later wrote in long lines without punctuation. He continued using the whole of human experience in a collectivist, egalitarian way, firmly grounded in his own language, addressing the lyric subjects of love, death, time, loss, and memory, speaking to all.

There are, however, some flaws in Konuk’s approach. While she makes references to a number of poets, Konuk tends to favor T.S. Eliot as a voice of authority, which is too narrow a purview for the material at hand. Also disappointing is that, in spite of some obvious similarities to poets like Pablo Neruda, César Vallejo, Yannis Ritsos, Mahmoud Darwish, and Thomas McGrath, Konuk mentions them only in passing, or not at all.

But the largest hole in this book, one that will need to be filled by a subsequent biographer, is the somewhat perfunctory examination of Hikmet’s internal circumstances. Especially glaring is a lack of psychological depth. Konuk acknowledges the existence of certain personal issues, but then stops short, shortchanging the poignancy of his lyric self, the passionate expressions of love for life, as well as our adequate understanding of his mind and character. For example, about Hikmet’s wives, she says: “The loves came in succession, but they also significantly overlapped, which made for a pain that seems to have been for him another essential ingredient of love’s definitive impossibility.” But this guy had some deep issues with women, with his mother, with his parents’ divorce, with infidelity and abandonment—issues that cannot simply be ascribed to the hardships of prison and exile. An autopsy, a lurid tell-all, is not required, rather a full and empathetic portrait which conveys his personality, his identity, his interior self, and thereby brings him back to life.

Konuk’s stated awareness of the specific requirements of the genre of literary biography makes her incomplete synthesis of the important facts about his private and public life all the more surprising. She certainly does not intend this to be a comprehensive, “definitive” biography; we neither get, nor do we want, all of the details, but we do deserve a representative selection.

One of the contradictions of modern Turkey, where governmental suppression of journalists and writers is still a serious problem, is that Hikmet, the “romantic Communist,” is almost universally acknowledged as the nation’s poet. “For him, poetry was both the highest art and a potent social force. Its aesthetic charge was inseparable from its social and political charge.” “On Death Again” ends:

Whoever dies first,
however
and wherever we die,
you and I
can say we loved
each other
and the people’s greatest cause
—we fought for it—
we can say
“We lived.”