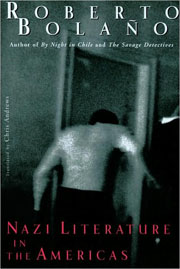 Since the author’s untimely death in 2003, Roberto Bolaño has risen to a level of international prominence. Nazi Literature in the Americas is one of his most innovative works, as it charts the lives of 33 writers from the Western Hemisphere, all of whom are completely invented. As Bolaño’s deadpan satire carves its way through the imagined lives of these extremist authors, we’re introduced to a surprisingly varied body of creative work: monumental avant-garde experiments, bizarre Nazi science fiction efforts, embarrassingly sentimental lyrics, and the unabashed soccer hooliganism of the Fabulous Schiaffino Boys.

Bolaño’s subjects are for the most part absurdly minor literary figures, producing their poems and novels with little awareness of their almost total irrelevance to the larger literary society around them. Oddly, the effects such extreme political commitments have on these authors’ works are curious at best—their politics sometimes hover in the background and at other times emerge in completely inscrutable ways. As an example, consider Franz Zwickau’s poem “Concentration Camp,” described as “a humorous and at times touching story of Zwickau’s life as a child, between the ages of five and ten, in a middle-class neighborhood in Caracas.” In many cases these Nazi authors are near buffoons, textbook studies in the banality of evil.

Historical figures—both artists and politicians—regularly make cameos in the lives of Bolaño’s imagined authors. Jim O’Bannon, a beat poet and football player from Georgia, apparently unaware of the movement’s sexual politics, attacks Allen Ginsberg after Ginsberg and another man make advances toward him. Rory Long, a disillusioned disciple of Charles Olson, vomits for three hours after reading The Maximus Poems. Meanwhile, the lives of the South American poets are often deeply intertwined with the repressive dictatorships of Perón and Pinochet.

It’s a testament to Bolaño’s skillful prose and vivid characters that his parade of microbiographies stays fresh throughout. But is his dark, potentially inflammatory comedy aiming for anything beyond well-wrought farce? In the final biography, that of artist and murderer Carlos Ramírez Hoffman, we’re at least given a hint. The story is narrated by a Bolaño who, much like the autobiographical Bolaño (though not necessarily the historical Bolaño, as a recent piece by the New York Times suggests), was briefly incarcerated in a Chilean prison following Pinochet’s coup in 1973. Bolaño is hired to track Ramirez Hoffman and eventually comes across him in a dingy bar in Spain. As it becomes clear to Bolaño that the man who hired him intends to kill Ramirez Hoffman, he half-heartedly attempts to intervene on behalf of the poet/murderer: “He can’t hurt anyone now, I said. But I didn’t really believe it. Of course he could. We all could.”

Bolaño’s reaction to the presumed revenge killing ends here. He’s too smart to overreach himself and try to resolve any nagging questions we might have about the role of politics in art or to indulge in any heroic fantasies about the writer’s role in history. If anything, Bolaño seems to be saying, political heroics can get a writer into deep trouble, sometimes yielding results much more dangerous than bad art. Beyond this suggestion, Bolaño sidesteps any overtures toward a grand moral lesson. In fact, by entering the story as a character in a fiction of his own making, Bolaño turns the dilemma on its head: it is no longer a question of how art can “influence” the real world, but how the real world can be drawn into the imagination—and how the imagination can process, rearrange, lampoon, and sometimes defuse the residue left behind by very real upheaval and displacement.