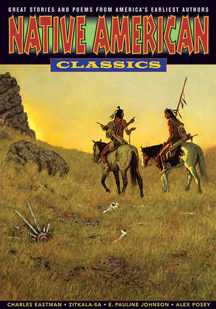 by Dave Wagner and Paul Buhle

If there is a theme linking the most ambitious narratives in this wonderful collection, it’s the representation of the natural world as a kind of supernatural democracy. In a crisis, every creature has an equal voice. It is given respect for its specialized knowledge, its unique hunting abilities, its relation to the spirits and its style of teasing and humor. The animals that cooperate with human beings across species lines in hunting or in self-defense create permanent alliances, from which the names of the human clans and lineages emerge. And every lineage has its own story to tell.

At first impression, it seems the editors chose the stories in Native American Classics to favor these themes. On closer inspection, however, it becomes clear that the Native American storytellers themselves shaped their stories this way because that’s the way their cultures are organized in the first place, and the way they want them to be understood and remembered. There’s also an historical context for these narrative unities, for most of the storytellers here were born in the late 19th century, were bilingual and bicultural, and were devoted to capturing in prose the life they had known in childhood. The pre-World War I period is remembered through the photos of Edward Curtis and for the flowering of U.S. scholarship on American Indian culture, but it should also be remembered as a time when the first American Indians became scholars and writers on their own terms. Some of the best of their popular writing is preserved in this volume and illustrated by some of the best contemporary comics artists, Native American and otherwise.

The immediate difficulty for the editors was how to select stories that do justice to a vast population that lacked anything resembling a common language and often shared little more from region to region than their presence on the emerging map of European conquest—and perhaps the ability to adapt their specific cultures over millennia to contrasting wetlands, deserts, mountains, and radically different food sources. Although the subject is so diverse, difficult and diffuse as to defy compact storytelling, this volume tackles the problem by showing, first, the commonalities of these cultures, and then the effects of the European invasion.

On the first point, there is the skilled hand of artist Robby McMurtry, based on a 1909 tale by Charles Alexander Eastman, “On Wolf Mountain,” showing the wolves as skillful allies of their fellow plains-dwellers when a “hairy-faced” (i.e., bearded) white man introduces sheep into the environment. The sheep shear the grass to its roots, depriving the buffalo of its food, and by extension the Indians and the wolves as well. The sheep-man sees it as his right to exterminate the wolves entirely and regards the Indians in the same light, but the wolves join the humans to fight back, with a level of planning and strategic intelligence, not to mention bravery, that is the heart of the tale. Chased by men, horses and dogs, the wolf hero gets away. His trials cover six or seven of the loveliest for-color, comic art pages we have ever read.

McMurtry’s fate was worse than the wolf’s. He is described in the contributors notes as a victim of “a shooting at his home” shortly after he completed “On Wolf Mountain.” He was part Comanche (along with many other parts) and laconically claimed to have been raised by wolves near Loco, Oklahoma. He wrote plays and created graphic novels on Native American themes, and deserves to be remembered for what he achieved, the titles of which are given here and deserve exploration. Other artists in this volume include members of the Chemehuevi/Navajo, Apache, and Kickapoo tribes, as well as the Chickasaw, Creek and Yaqui, just to mention a few.

The stories that deal with the European invasion have an eerie quality that represents not merely a sense of loss but a confusion caused by a sincere engagement with a culture that at times seems deranged. There is the example of the lead story, “The Soft-Hearted Sioux,” adapted from a first-person tale by Zitkala Sa, published in 1901. Like a number of others, including the book’s frontispiece poem (“After a Sermon at the Church of Infinite Confusion”), it confronts the Christianity forced upon young Indians as they were torn away from their tribal traditions. Here a youngster of the late 19th century returns home wearing allegedly civilized garb, and inevitably holding a bible. He brings disaster upon his aged father, and in seeking to find meat for the old man, brings disaster upon himself.

One of the most powerful stories in the collection is told by Handsome Lake, the Seneca prophet, who offers his own explanation of European colonialism. It was all a strategic plan by the white man’s own Satan to increase his empire by seizing the entire North American continent. He accomplishes this in acts so evil that the devil himself comes to regret them. Another story in this vein is the valuable “Anoska Nimiwina,” drawn with such mystic power by Afua Richardson that the eye jumps to the page. It tells the Indian side of the story of what whites have always opprobriously called the “Ghost Dance,” which here has nothing to do with becoming invisible to enemy bullets; it’s a powerful explanation of how a daughter of the defeated side in an inter-tribal war began the process of uniting all of the tribes in a single vision of peace and Indian unity.

Another valuable tale is “The Middle Man” drawn by Terry Laban, from a 1909 tale that is rarely if ever told in the various sagas of the frontier, at least not with this kind of historical specificity. The art is highly “cartoony,” almost Archie-like, but this gives the story a tone of chipper irony. A land agent, the titular middle man, has found a great way to get rich though the Dawes Act of 1887. It was supposedly intended to make Indian integration into American society easier, but in fact it facilitated the systematic theft of the scarce remaining Indian communal lands. Or of their oil rights, which amounts to the same thing. In this case, a land purchase is swiftly turned into a $6,000 profit for the land agents, a $25 payoff to a collaborating tribesman, and ten bucks for the landowner, a grandmother with no English. Better than outright stealing—except, of course, for the Indians.

There’s much more to be said about the remarkable qualities of these writers, but the reader will find many of them in a surprising place: the pages of notes on the contributors. It’s a virtual catalogue of Native American writers at the turn of the 20th century, some from the frontier but others from Eastern and Midwestern cultures. Their personal sagas are so diverse (and interesting) that they fill five pages of small-type biography. There contributions are not only in short stories but also in poems and what might easily be called theological meditations.

Similarly there is a generous sampling of the work of today’s comics artists, Native and otherwise, who clearly have an affection for juvenile literature or western lore. Study these contributors entries one by one, then turn back to the stories and you come away with a rudimentary sort of education in what has been done, and what can be done, with a literature so important to any grasp of American history. For this reason above all, Native American Classicsis a book to treasure and place in the hands of the young.