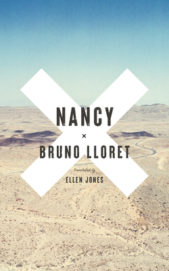 A speculative and poetic first novel, Chilean writer Bruno Lloret’s Nancy comprises the deathbed recollections of its title character, a widow who is dying of cancer. Setting the book in the near future, in a politically fractured and ecologically collapsing Chile, Lloret endows his writing with an atmosphere that seeps into Nancy’s every memory, shadowing the narrative with an aura of decay that is almost tangible in Ellen Jones’s translation.

This atmosphere pervades the book, as Nancy frequently interrupts her recollections to bemoan her pain, show readers her X-rays, and dwell on unpleasant memories, like trash piling up at the shores of oceans and black clouds spilling out of factory smokestacks. Yet despite this heavy material, Lloret manages to strike a pleasant balance between lyricism and simplicity, making frequent use of clear (albeit sometimes surreal) imagery bookended by X’s: “From the base of the mountain a tangle of sheep streamed toward us ✖ ✖ ✖ A couple of dogs nipping here and there to keep the flow on course ✖ ✖ ✖ ✖” This device elevates Nancy from a well-crafted and poignant debut to an innovative and genuinely exciting experiment in form.

Indeed, Nancy is as much an interpretive visual game as it is a narrative. Lloret’s X’s weave in and out of the text in lieu of section breaks, quotation marks, or sometimes even periods. They are used skillfully to tighten the anxiety of certain scenes, invoke the rhythm of Nancy’s labored breathing, suggest the languid passage of time, or form some silhouette of an image related to the plot—at one point, X’s arranged in vertical lines suggest jail cells; at another, they evoke footsteps as Nancy’s future husband, meeting her for the first time, approaches her. As the book continues, one notices that the X’s echo the novel’s thematic content as well: X for negation, X for death, X for X-rays, X for the thousands of crosses in the graveyard where, near the end of the novel, Nancy observes the sunset.

Lloret succeeds at the difficult task of depicting the slow, complex, and global violence of climate change through the insular story of a single character who observes without passing judgement. Though inhabiting a world of ruin, a diseased world, Nancy is realistically concerned with her boyfriends, her brother, and her parents. An “ecological novel” emerges only at the peripheries, influencing Nancy’s life without her even discerning it. Of course, every facet of her life has been influenced by this decay, from her husband’s death in a poorly-run tuna canning operation to the flu epidemic that erupts from a pork processing plant and dispossesses her uncle. As the climate crisis continues to ravage our world, Lloret illustrates one possible future we are barreling towards, while focusing, as good novelists do, on the singular drama of an individual and her kin.