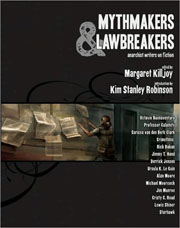 It can be bittersweet when an idea that has hitherto existed only as an oral tradition, or in private correspondence, or as an allusion in another format, becomes suddenly codified and concretized into a solid work of reference. In Mythmakers and Lawbreakers, a collection of interviews with writers who give a sympathetic hearing to anarchist ideas, Margaret Killjoy has undoubtedly made a great contribution to the study of the artistic influence on and of anarchism, and yet it feels a little strange to see this previously secret knowledge shared with those outside the activist demimonde.

As might be expected from any group of anarchists and fellow travelers this large, there is little consensus about what anarchism means, who anarchists are, what anarchist fiction can be, and how best to produce and distribute those ideas. Despite their differences—and it’s a testament to the diversity of the anarchist tradition that individuals as widely separated as Alan Moore and Derrick Jensen can both reasonably be said to belong to it—it seems as though most of the writers agree with Kim Stanley Robinson’s exhortation from his introduction: “In the meantime, we have to constantly work; resist capitalism; interrogate our own actions; and speak out against the current order, for something better.”

In her interview with Jensen, best known for his non-fiction polemics, Killjoy explores a crucial question: what’s the point of writing, and writing fiction at that, if the goal is to build a new society before the current one collapses? True to form, Jensen restates the question before offering an equivocation: “And so, is my work helping to save the salmon? I don’t know. And that’s a tremendous source of frustration.”

Other writers in the collection are less troubled by that apparent contradiction. In her interview, Starhawk defends the practice of anarchist fiction. “The larger culture is not going to reflect the counterculture that we build, but I think it’s important for us to have those kinds of reflections, to create those kinds of reflections. To use fiction—which is a very powerful tool—for confronting some of those major issues we confront.”

Killjoy addresses many of the other concerns of anarchist writers—how to disseminate radical information through capitalist distribution networks, how to balance imparting ideology and the demands of good writing, how to stay engaged with a fractious and protean milieu—subtly and with humor. Her interviews with some of the pseudonymous and/or group identity authors are engagingly surreal.

Perhaps the only serious flaw in the collected interviews is that some of them are so short. Killjoy’s questions are very concise, and the answers she elicits are generally lucid and to-the-point. Given the assembled talent, it would have been exciting to see more digressions and detailed exposition of the various works discussed, since so few of the authors have been interviewed at length elsewhere about their anarchism and its relationship to their works.

Killjoy’s book, though very comprehensive, will hopefully serve as a prod to other authors, journalists, and theorists to begin an even more exhaustive cataloging and investigation of this under-examined but ever fruitful category of literature. Losing a little in-group cachet would be a small price to pay for a discussion of anarchist fiction that could reach a larger audience and prompt more fiction writers to explore anarchist ideas.