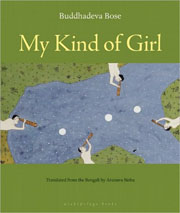 You can profit by memories—you can even steal them—but you can't extirpate them. And yet, for what constitutes such a rich part of our consciousness, we can't help but want to be rid of them. “What's the value of memory?” asks one of the characters in My Kind of Girl, “None!” another retorts, “Eats into work, wastes time, makes you sad.” Unfortunately for the latter, he and his impromptu friends have nothing but time on their hands—and far worse ways to waste it.

In Buddhadeva Bose’s fine novel, a derailed cargo train strands a doctor, a writer, a contractor and a bureaucrat together for a single night. It's winter and the quartet trundle into the first-class waiting room at Tundla station. As the prologue unwinds, the men order coffee and stretch out; a tin of cigarettes is passed round. Time proves difficult to pass, and after a half hour of idle chatter, the mood in the waiting room turns a rather bleak shade of grey. At that point, two newlyweds, “lost—still—in their love for each other” peer into the room. Taken by surprise, the four men stare blank-faced at them, and the couple, unsurprisingly, leave.

They didn't look like first-class passengers,” said the doctor.
“No, not because of that,” said the book lover with the furrowed brows, speaking from his corner for the first time since he'd entered the waiting room. “Not because of that. They went back when they saw us.”
A faint smile appeared on the smooth face of the bureaucrat. “I see. Honeymoon. In love. Well, tonight at least, they won't be happy.”
“Not at all,” the reader of books replied carelessly. “They will find a cozy, private spot for themselves, they will enjoy it. They don't want anything else, they just want privacy.”

The writer, as we learn by the end of the book, is correct. He later finds the two lovers snuggling under a single blanket “behind a pile of packing cases” on the platform—self-satisfied in the luxury of their solitude. The volume concludes with that image, yet the newlyweds, like the pilgrimage in The Canterbury Tales or the plague in The Decameron, are but a backdrop. Thus inspired each of the men proceeds to share the great love story of their lives—which in Bose's charming and chatty prose provides us with tales as entertaining as either of those of its predecessors.

The first of the four stories, “Mankhanlal's Sad Tale,” places us in the context of Calcutta's shifting class boundaries during the Second World War:

It was an amazing time. There were no people in Calcutta, you couldn't add another person to Calcutta, Calcutta bombed, thousands of people dying on the pavement. The two-paise stuff cost twelve annas; neither rice nor sugar, coal nor salt was to be found; all you could get was khaki, jobs, and a bounty of easy cash.

Mankhanlal, dim but well intentioned, comes from a family of Bengali Oblomovs, landowners whose wealth and status has slowly faded into debts and desuetude. His mother, obsessed with elevating her children's status through education, is adamant that her son graduates from college—a task to which Mankhanlal passively lends his consent, without, of course, bothering to “crack a single book.” Not satisfied with her son's B.A., Mankhanlal's mother wants to marry him off to her next-door neighbor's daughter, Malati, whose acquisition as a daughter-in-law will lend the family even greater prestige. Though they are impoverished intellectuals—Malati’s father is a college professor—they turn down the mother's offer in disdain, considering Mankhanlal and his family nothing but nouveau riche, tainted by boorish ways and calloused hands.

Notwithstanding this social affront, Mankhanlal's is a star on the rise. Education soon proves more a feather than a tool, and expanding on his father's fledgling furniture business, Mankhanlal, taking advantage of Calcutta's boom, is soon a millionaire. Things, on the other hand, turn out quite differently for the professor's family. Though Malati, now a graduate, finds employment in an office, she cannot keep the family afloat. Her father's pay is an arrears, and though there's plenty of work to be had in Calcutta, who needs private tuition when there's money to be made? The professor soon falls so far behind on his rent that his possessions are dragged out of the house while the family, helpless, huddles on the floor in a corner of the bedroom. Mankhanlal, who unlike his mother harbored no grudge against the family, pays off their debts. Not that Malati expresses gratitude—she insists she will pay him back and refuses to acknowledge his presence further. The story ends.

The only tale to end happily, in a way, is the third, “Dr. Abani's Marriage,” where a famous writer's sister-in-law falls in love with the doctor's friend, only to marry the former once she's gotten over her one-sided crush. My Kind of Girl, however, is more than a sliding panel of love stories; it is a social document, it is a period piece which depicts the country in a violent state of flux. Women's rights are largely absent, while racial and caste prejudices remain as fixed as ever, despite the increased mobility. The last tale, “The Writer's Monologue,” offers a few insights into the insecurity of rural (mostly eastern) Bengalis versus their “street smart” Calcutta cousins. Still, these faults are at least recognized—and portrayed in an appropriately realist if soft-hearted manner.

“Is the memory of happiness that has passed happy or sad?” asks the contractor. “Somewhere in between” the book seems to answer. Originally published in Bengali as Moner Mato Meye in 1951, My Kind of Girlis one of Bose's lesser-known efforts, but this translation, previously published by Random House in India last year, is another fine addition to Archipelago's growingly impressive list of world literature.